Jeremy Deller, the Turner Prize-winning artist, has unveiled his £1m monument marking the 200th anniversary of the Peterloo Peterloo massacre.

Despite complaints from disabled activists, the sculpture has received positive feedback from the art establishment and the general public. 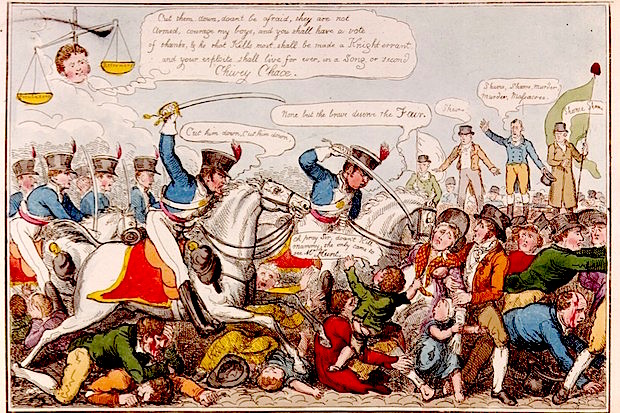 Deller speaking on Radio 4 said, “Addressing accessibility had been “enlightening”. His vision for the monument had been a work of art for the public to use as a gathering point for protest. Deller added, “It’s just discussing with people. Understanding what the problems are and how to resolve them. As a process for me, it’s been quite enlightening. [The accessible solution] will become part of the memorial. It might even become a feature of it.”

The monument is six-foot-high and is inscribed with the names of victims of the 1819 massacre — the top references other state attacks on civilians including Tiananmen Square and Bloody Sunday. The actual day of the 200th anniversary is marked on Friday with an open-air event.

Councillor Luthfur Rahman, Manchester City Council Executive Member for Culture said, “It’s an innovative and imaginative interpretation of the design brief for the memorial placed a greater emphasis on interaction than they had envisaged for a public artwork, which meant not enough consideration was initially given to accessibility.”

He added: “While the memorial will initially go on public view in its original form, in the time for the 200th anniversary of the Peterloo Memorial, it will be modified to ensure equal access.

“How this is best achieved is something which we are finalising in liaison with disability access advisers, but we are determined that the solution will be of the highest quality and make a positive contribution to the memorial’s appearance as well as its design.”

Peterloo is a landmark event in the history of British and international democracy. The people of Greater Manchester deserve a democratic say in the design, location and construction of the memorial, with extensive public consultation and input from inception to completion.

The memorial location is both prominent and public, on a site of historical significance for the massacre. It will be of comparable size and quality of materials to other major city centre monuments, with a respectful space around it for people to gather in contemplation or commemoration.

The memorial will be an object of civic pride which resonates with the people of Manchester and which expresses the spirit of democracy, economic justice and human rights.