Michael Ellis the Arts Minister has placed a temporary export bar on Ehrenbreitstein, a painting by JMW Turner, to provide an opportunity to keep it in the country. The painting is at risk of being exported from the UK unless a buyer can be found to match the asking price of £18,533,750 (plus VAT of £306,750).

The work of art was originally shown at the Royal Academy in 1835 and based on material Turner collected when he visited the spot in 1833, the painting depicts the historic fortress overlooking the Rhine near Koblenz, Germany, dense with historical references to the French Revolutionary Wars which devastated Europe and reshaped the political and cultural landscape.

“Turner is one of those seminal figures who changed the way we see and think about the world. An artist rooted in the aesthetic philosophy and culture of his time, perpetually engaged with the art of both his predecessors and contemporaries, he was at the same time possibly the first ‘modern’ painter; who directly inspired the Impressionism of the nineteenth century, and presaged the Abstract Expressionism of the twentieth. These late works in particular, with their bold application of colour, treatment of light and deconstruction of form, revolutionised the way we perceive the painted image. By applying the techniques of a watercolourist to the use of oils, with successive layering of translucent colour thinly applied to the surface, which imbue his canvases with rich, hazy light, he gave his works an unprecedented poignancy and power that has rarely been rivalled since.” – Julian Gascoigne, Senior Specialist in British Paintings Sotheby’s 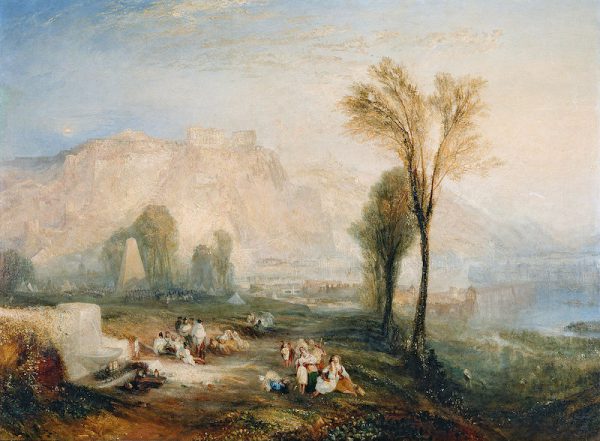 Turner Painted this masterpiece in 1835, Ehrenbreitstein is a late work, dating from a period that is widely considered Turner’s best

The obelisk on the left marks the grave of General Francois-Sévérin Marceau-Desgraviers, a hero of the French Revolutionary Army. His brief but brilliant career made him a Romantic hero while his moving funeral, at which German and French soldiers laid aside their enmity and participated, became a symbol for European reconciliation. These won him the accolade of a passage in Lord Byron’s poem “Childe Harold’s Pilgrimage” and the painting demonstrates that Turner shared Byron’s sentiments.

Turner produced a number of illustrations of sites associated with Byron for his publisher John Murray, and chose epigraphs from Byron for six paintings ranging across Belgium, Italy and – as in Ehrenbreitstein – Germany.

This is the only painting Turner produced of Ehrenbreitstein in oil. Contrary to his usual practice, the painting – rather than a highly finished watercolour – served as the direct model for the reproductive engraving by John Pye. Frustrated at how long Pye was taking to complete his task, Turner reclaimed the painting in 1842 and sold it to his important patron Elhanan Bicknell, on condition that it be returned to Pye until the print had been finished.

Arts Minister Michael Ellis said: “This rich, atmospheric painting demonstrates Turner’s extraordinary skill depicting light, as well as the close relationship between painting and poetry.I very much hope that it can remain in the UK, where it can be admired and appreciated by future generations for many years to come.”

The decision to defer the export licence follows a recommendation by the Reviewing Committee on the Export of Works of Art and Objects of Cultural Interest (RCEWA), administered by The Arts Council. RCEWA member Lowell Libson said: This magnificent and beautifully preserved painting from Turner’s maturity demonstrates this great artist’s ability to present many layered narratives – historical and emotional – within the context of topography. It is one of Turner’s finest works of the period.

The RCEWA made its recommendation on the grounds of the painting’s outstanding significance for the study of its status as a literary landscape and as a painting made primarily for engraving. The decision on the export licence application for the painting will be deferred until 28 May. This may be extended until 28 November if a serious intention to raise funds to purchase it is made at the recommended price of £18,533,750 (plus VAT of £306,750).

On 5 July, Sotheby’s will offer for sale one of the greatest works by J.M.W. Turner still in private hands in the Old Masters Evening Sale. Painted in 1835, Ehrenbreitstein is a late work, dating from a period that is widely considered Turner’s best: other works from this time now hang in the world’s greatest museums, with only a minute number of this importance and quality remaining in private ownership. The subject of enormous critical acclaim when it was first exhibited in 1835, the painting depicts the ruined fortress of Ehrenbreitstein near Coblenz – a place of special significance for Turner. Though he made many drawings and watercolours of German views, this is the most important oil painting of a German subject that Turner ever painted.

Often referred to as the ‘painter of light’, Turner is widely regarded as Britain’s foremost artist, whose unique and unprecedented style not only had a profound and lasting impact on British art, but was also a vital precursor to both the Impressionist and the much later Abstract Expressionist movements — Monet openly acknowledged his indebtedness to Turner. Major works of such quality by Turner are rare on the international market. The last example to be offered (Rome, from Mount Aventine, painted in the same year as Ehrenbreitstein and offered at Sotheby’s in 2014) made a record £30.3 million (US$47.6 million) – the highest price ever achieved for any British-born artist at auction, and placing Turner alongside Rubens and Raphael as one of just three artists from the pre-Impressionist era to have achieved prices at this level. The picture will be offered with an estimate of £15–25 million (US$18.7–31.2m/€17.3–28.9m).

Offers from public bodies for less than the recommended price through the private treaty sale arrangements, where appropriate, may also be considered by Michael Ellis. Such purchases frequently offer substantial financial benefit to a public institution wishing to acquire the item.