Research and scientific analysis have created compelling evidence that a small watercolour painting, currently on view at Abbotsford, near Melrose, the former home of Sir Walter Scott is an actual work by J.M.W. Turner. The painting was bought at a London auction house where it was catalogued as a “continental view”.

The postcard size painting of Sir Walter Scott and his family is part of an exhibition this summer at the residence. The work measures five and a half by three and a half inches, and was recently sold at a minor London auction house.

Infrared scanning suggests to me that it is not the work of a copyist. “Everything about this little painting feels authentic and consistent with the great man” – Kirsty Archer-Thompson

The Abbotsford Trust stated that this “previously unknown painting may have been a private family memento linked with Turner’s visit to Scott’s home in the summer of 1831.” The Trust hopes to shed light on this mystery two hundred years after the artist and the writer first met in 1818. It is continuing to facilitate ongoing research into the history and composition of this tiny treasure and is encouraging all those curious about its story to come and see the painting for themselves. 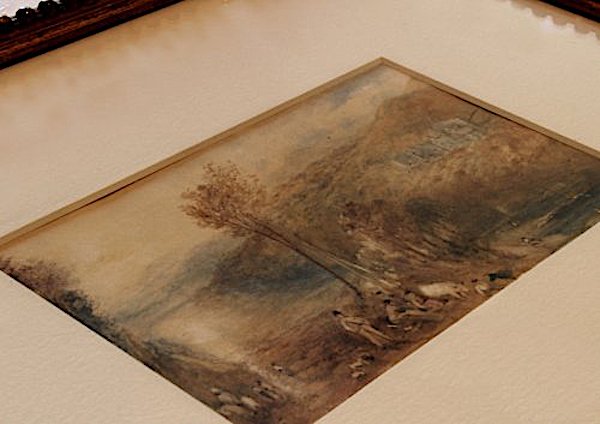 Sir Walter Scott and his family By J.M.W. Turner

The small painting has been the subject of much analysis, from pigment analysis to infrared imaging, and is currently being displayed at Abbotsford in the frame in which it was sealed when it was discovered – a frame which dates to the lifetime of J.M.W Turner himself. If it is genuine, it may be an earlier version of another painting of Abbotsford that was used as the inspiration for an engraving published in Memoirs of the Life of Sir Walter Scott, a commemorative biography published after the famous writer’s death.

Kirsty Archer-Thompson, Collections and Interpretation Manager of the Abbotsford Trust and curator of the exhibition commented: “This painting is, quite frankly, electric. Everything about it, from the minutiae in detail and the use of scraping out highlights, to the evolution of its composition from pencil sketch to painting – a whole world only visible through infrared scanning suggests to me that it is not the work of a copyist.

“All of this analysis, including work by painting analysis expert, Dr. Libby Sheldon, demonstrates that it was executed by an astonishingly skilled hand. Turner was a master of these highly intricate and delicate watercolour illustrations – two of which are already owned by The Abbotsford Trust.

“Everything about this little painting feels authentic and consistent with the great man. I hope that we can prove the theory with the help and support of enthusiasts and experts in the art world.”

James Holloway, Chairman of the Abbotsford Trust and former Director of the Scottish National Portrait Gallery, commented: “It is wonderful for Abbotsford to be able to show such a fascinating painting. It will intrigue and delight our visitors. To think that we are publicly displaying the watercolour for the very first time since it was painted by Turner is also tremendously exciting.”

In investigating this mystery, the Abbotsford Trust hopes to solve a wider mystery of the “Abbotsford Tray”, which is now in the Indianapolis Museum of Art and was reportedly once owned by the Scott family in the early 1830s. The tray intriguingly has the same composition painted on it as the newly discovered watercolour now on display at Abbotsford.

Turner was originally commissioned by Scott’s publisher to ‘lavishly’ illustrate the first edition of the writer’s biography in 1837. However this commission, which was to include family portraits as well as landscapes, was, according to the Turner Scholar Gerald Finley, cancelled some months later in favour of a single image of Scott by Sir Henry Raeburn. Questions now surrounding the painting include: Was this beautiful lost watercolour originally intended to illustrate this, the first ever edition of Scott’s biography? Did it subsequently make its way into the hands of Walter Scott’s eldest daughter Mrs Sophia Lockhart? Or did it remain in possession of the publisher, Robert Cadell? If so, does this painting predate the Abbotsford Tray, making it the original inspiration for both this, and the later known illustration “Abbotsford from the Northern Bank of the Tweed”, engraved in the second edition of the biography?

Kirsty added: “We know that when Turner stayed here at Abbotsford in August 1831, Scott was keen to point out particular artworks in his collection. One of the paintings Turner would most definitely have seen in is a view of Abbotsford and the River Tweed by the Scottish artist Elizabeth Nasmyth. This painting is from exactly the same vantage point as the watercolour we believe Turner painted.

“Scott had a personal attachment to the Nasmyth painting and its composition, and my theory is that this gave Turner the idea to compose the same scene, which he based on sketches in the Abbotsford sketchbook used during his visit in 1831. These sketches can be explored digitally as part of our exhibition. There are plenty of examples of artworks gifted privately by Turner to his patrons and I believe this painting of Scott, his family, and his beloved home was a commemorative piece with a whole layer of hidden meaning.”

The business partnership of Scott and Turner began in 1818 when Scott was Britain’s premier novelist and culminated in the publication of Turner’s illustrated editions of Scott’s poetry and prose works after the author’s death in 1832. This sometimes strained and frosty relationship between artist and author had as many twists and turns as a novel, from accusations of ‘slurring’ and palms ‘itchy’ for money to the warm welcome Turner received in 1831 as he arrived at Scott’s family home in the Scottish Borders. During his stay at Abbotsford, he was tasked with getting to know the man behind the writing and sketching and exploring a landscape that Scott had helped to put on the map.

Turner and Scott were from very different social backgrounds, with very different characters and political leanings. They were both the pre-eminent artists of their day, and their journey to the top had involved no small degree of reinvention, skill and mastery of their respective markets. Both men were protective of their art, and, increasingly with their advancing years, subject to wounded pride. They were also prone to fits of anxiety and depression, held in check by their love of the great outdoors and of the escapism and inner peace it could provide. Scott was a communicator and a collaborator, whereas Turner had grown up in a marketplace where trade and commerce was the language of interaction. This had made him cautious, protective and renowned as a man who drove a hard bargain. Charting their lives and careers side by side, the exhibition explains how and why the sparks flew but also reveals that there was a great deal of common ground between Scott and Turner, perhaps more than either man appreciated.