John Singer Sargent’s masterpiece Gassed, is to be loaned to The National World War I Museum in the US by the Imperial War Museums here in the UK, to mark the centenary of the War.

“With all its brilliant genius and painful significance… how the field of national psychology must have been harrowed by events which had taken place during the war.”
– Sir Winston Churchill upon viewing Gassed for the first time

The large scale painting tells the tragic story of reaching a British dressing station southwest of the French city of Arras in the summer of 1918. The iconic American artist John Singer Sargent found his subject for an overdue painting. Sargent had been commissioned by the British Government to “contribute the central painting for a Hall of Remembrance for the World War.” He had procrastinated until he saw the dressing station.

The dressing station at the small village of Bailleulval was treating a number of British soldiers who had been blinded by a mustard gas attack.

The final product, Gassed, measures more than nine feet tall and 21-feet long. Considered one of the most important war-related works of the past several centuries, Gassed was hailed as “monumental” by the New York Times, a “masterpiece” by the Daily Mail, “magnificent” by the Telegraph, “epic” by the Associated Press and “extraordinary” by The Guardian.

The panoramic scene not only shows the devastation to the young men in uniform, but in an ironic juxtaposition, a football (soccer) game is being played in the background seemingly unaware of the damaged and blinded parade of Tommies (the nickname of British soldiers). 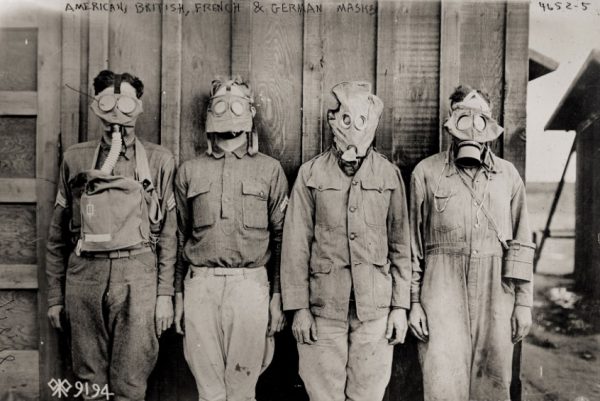 Gassed, which is on loan from the Imperial War Museums in the U.K., has been viewed by tens of millions of people since its completion. It’s significance has grown over time as noted British broadcaster/historian Jon Snow hailed the painting as one of the “10 Best British Artworks About War,” while The Guardian listed Gassed among “1,000 Artworks to See Before You Die.”

The exhibition also includes original maps showing the location of the dressing station where Sargent witnessed the scene and reproductions of many of Sargent’s study drawings for the painting. Additionally, the Museum and Memorial partnered with the U.S. Army Chemical Corps Museum to feature historical and contemporary objects showing detection and protection from chemical warfare from World War I through the modern era.

The scene is the aftermath of a mustard gas attack on the Western Front in August 1918 as witnessed by the artist. Mustard gas was an indiscriminate weapon causing widespread injury and burns, as well as affecting the eyes. The painting gives clues about the management of the victims, their relative lack of protective clothing, the impact and extent of the gas attack as well as its routine nature – the football match goes on regardless. The canvas is lightly painted with great skill. Sargent draws the viewer into the tactile relationships between the blinded men. There is a suggestion of redemption as the men are led off to the medical tents, but the overall impression is of loss and suffering, emphasised by the expressions of the men standing in line. In sharp contrast to the victims, the football players are physically and visually co-ordinated and have full kit. Sargent travelled to France with artist, Henry Tonks in July 1918. Tonks describes the context for this work in a letter to Alfred Yockney on 19 March 1920: ‘After tea we heard that on the Doullens Road at the Corps dressing station at le Bac-du-sud there were a good many gassed cases, so we went there. The dressing station was situated on the road and consisted of a number of huts and a few tents. Gassed cases kept coming in, lead along in parties of about six just as Sargent has depicted them, by an orderly. They sat or lay down on the grass, there must have been several hundred, evidently suffering a great deal, chiefly I fancy from their eyes which were covered up by a piece of lint… Sargent was very struck by the scene and immediately made a lot of notes.’ Sargent was commissioned by the British Government to contribute the central painting for a Hall of Remembrance for World War One. He was given the theme of ‘Anglo-American co-operation’ but was unable to find suitable subject matter and chose this scene instead. ‘ The further forward one goes’, he wrote ‘the more scattered and meagre everything is. The nearer to danger, the fewer and more hidden the men – the more dramatic the situation the more it becomes and empty landscape. The Ministry of Information expects an epic – and how can one do an epic without masses of men?’