As the calendar moves ever closer to the pre-Christmas election that will in all likelihood bring about Brexit, exhibition scheduling grows ever more bizarre. A good example is an outstanding exhibition devoted to the career of Judy Chicago that has recently opened its doors at the Baltic Art Gallery in Gateshead. If you are unable to get to Gateshead, look on the web to see what is included. Images of the exhibition are an excellent way to get an idea of what’s on show. Although the choice of location is excellent for those in the North East, it’s not easy for many people in the South East to casually visit.

There has been a great brouhaha in the British art world recently about doing full justice to women artists. How can our major London institutions have missed out on such a rich opportunity? Chicago’s work has indeed been shown in Britain previously – in bits and pieces, and usually outside of London. The Baltic Gallery exhibition is, however, the first retrospective of her art, on anything approaching major scale, ever to be presented in this country. No doubts can exist either about Chicago’s central importance, both to 20th/21st-century feminist art, or to the history of women’s art regarded as a whole. The show at the Baltic is, however, creeping only very gradually into public attention. A recent manifestation was an interview (not a review) in The Guardian – an excellent piece written by Hettie Judah, not by their regular art critic. 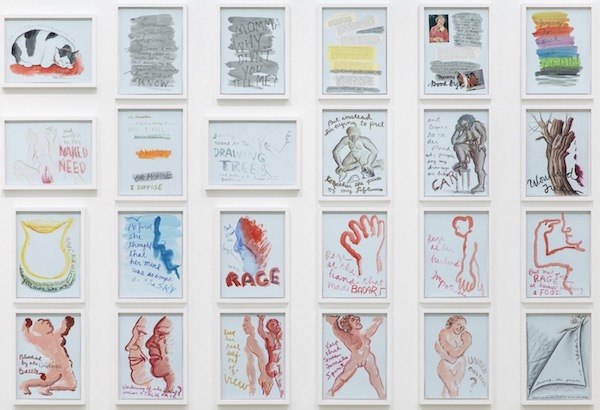 In a way, this is typical of the way in which Chicago’s career has proceeded. Full declaration here – I have some reason to know this, as I wrote the first monograph about her artistic work. It appeared in 2000, already very late in her career. Judy Chicago (Judy Sylvia Cohen) was born in July 1939 and was then sixty-one years old. She was already famous, both for her touring installation The Dinner Party first exhibited in 1979 and now permanently installed in the Brooklyn Museum in New York, and even before that for her autobiographical book Through the Flower: My Struggle as a Woman Artist, published in 1973. These two events made her a feminist heroine but left her strangely unplaced in the ongoing history of American art. It was this lack that my book attempted to put right, and I think succeeded mainly in so doing. The irony, appreciated both by subject and author, was that that I was neither female nor American. As Judy once said to me, when I expressed some discomfort about this: “Well, they had their chance.”

Evidently, however, the official London art world still missed out on the message. They have preferred to celebrate the wrongs done to Dora Maar, Picasso’s ‘weeping woman’ – but where would she be without her association with Picasso? Or to embark on a doomed enterprise to try and prove that women played a significant role in the 19th century Pre-Raphaelite movement. As muses and/or victims maybe, but not as independent creators of art.

If one looks at the show at Gateshead, one notices certain shifts of emphasis, which keep it in step with contemporary art as it exists now. There are, for example, a lot of records of performance pieces, with coloured smoke. Some works make use of skills historically, though not exclusively, associated with women, such as the Creation Tapestry. There are images associated with The Dinner Party, labelled with the names of women in the past. And there are powerful abstract paintings, one of which is entitled Heaven Is For White Men Only. Looking to make a show in a foreign country, in a location not necessarily flush with money, there has been an emphasis on portability. There is nothing much that refers to Judy’s Jewish identity – e.g., nothing that seems to relate to an important series called The Holocaust Project (1985-1993).

Chicago’s creative range is vast – though this is a big exhibition, it would have been impossible to cover all aspects of this. Now in her 80s, she continues to respond to concerns that are absolutely contemporary – for example, to the damage that modern societies are doing to the environment that we humans most continue to inhabit.