Katharina Grosse has for many years been popular in her native Germany, but it wasn’t until Gagosian became interested in her work, giving her a solo show in January 2017, in New York that her work has become internationally recognised. Now her first London public institution show presents a new work, ‘This Drove my Mother up the Wall’, painted in situ at the South London Gallery.

In the South London Gallery’s main exhibition space, Grosse has made the void the dramatic centre of her project, masking the floor with a large foam stencil, then painting over it and the surrounding walls. Once she removes the stencil, a bright, white area of the floor is revealed, untouched by the veils of colour and broad, propulsive marks spreading to all sides. This filtering technique is also evident in Grosse’s recent canvas works, where stencils are placed over areas of the canvas at various stages of the painting process, resulting in chromatic layers that record her thoughts and actions. Grosse’s large scale and site-specific works engulf both interior and exterior spaces, unhindered by the traditional boundaries of the pictorial field. 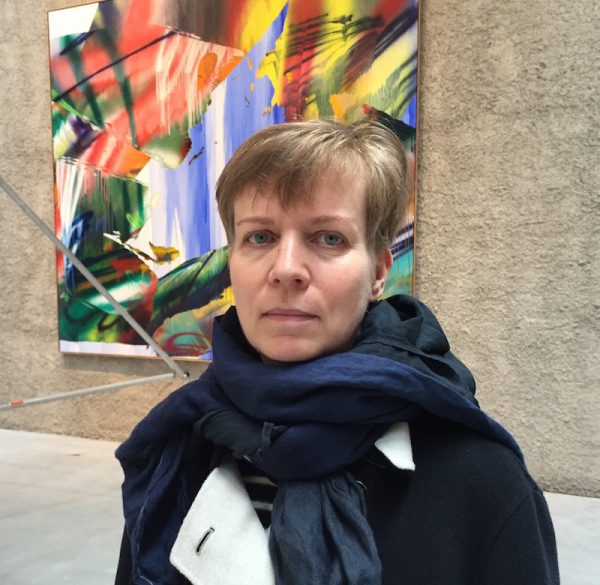 To accompany the painted installation, Grosse has selected two documentary films to be screened in the first floor galleries, intended to frame her creative practice and research interests. In the short documentary from the series Women Artists (2016) by Claudia Müller, Grosse curates a fantasy exhibition by eight other female artists and discusses her selection of artists and artworks, the relationship between their practices, and guides the viewer through a virtual realisation of her ideal group exhibition.

The second documentary film is The Gleaners and I (2000), by Belgian director Agnès Varda, a source of inspiration for Grosse’s South London Gallery installation that deals with the marginal, the residual, and the invisible. Filming with a hand-held camera and narrating the film herself, Varda travelled around France, profiling gleaners, from those who follow the country harvests through to urban scavengers, such as the bricoleur artist who finds objects and transforms them into sculpture, and Varda herself, who ponders the gleaning nature of digital filmmaking.

“Embracing the events and incidents that arise as she paints, Grosse opens up surfaces and spaces to the countless perceptual possibilities of the medium. While she is widely known for her temporary and permanent in situ work, which she paints directly onto architecture, interiors, and landscapes, her approach begins in the studio. With calculated focus, she allows new patterns and procedures in her paintings to emerge from action, further multiplying this potential with stencils cut from cardboard and thick foam rubber—tools with which to develop further cuts, layers, and perspectival depths. Grosse’s gestures unfold all at the same time in unmixed acrylic colours, engulfing the viewer in a toxic sublime”. – Gagosian Gallery