A large, figurative work, Kathryn describes the painting as depicting a ‘..meeting place, an intersection, people seemingly aware of each other, but minds elsewhere – all sharing an open space’. Kathryn’s work frequently returns to ideas around ‘resting places within a city’, where nature is seen and celebrated, and the observed and imagined worlds of individuals cross paths. 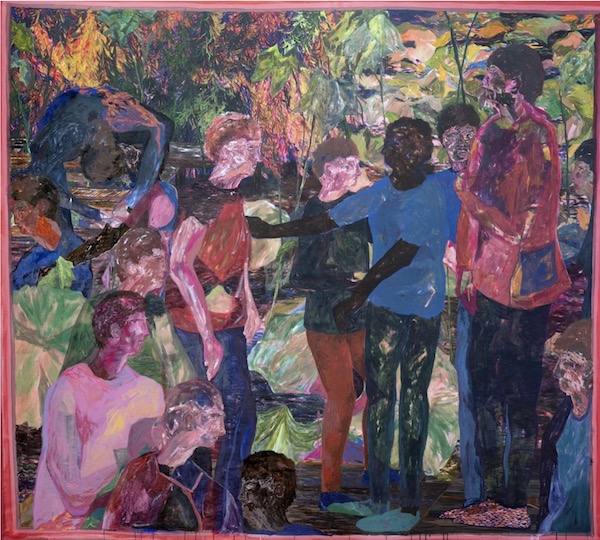 Top Photo: Detail The Common, 2020 by Kathryn Maple © with the artist.

Born in Canterbury, Kent in 1989, Kathryn attended the Royal Drawing School London from 2013 –14, and the University of Brighton from 2008-11. She has exhibited widely and won the Sunday Times Watercolour Competition in 2016 and 2014. She was selected for the John Moores in 2018.

“Kathryn’s wonderful painting is a truly worthy winner and we’re delighted to not only be awarding her the first prize but to also be acquiring the painting for the Walker’s collection”; Executive Director of Galleries & Collections Care, Sandra Penketh said “The Common is an observation about human interaction, and the way we commune with the natural world, particularly in our cities. It has a special poignancy at this difficult time when the value of our physical and emotional connections to people and places have taken on such a deep resonance. Congratulations to Kathryn for producing such a compelling and impressive work.”

Juror, Michelle Williams Gamaker said: “Kathryn Maple’s The Common struck a chord during the judging process, perhaps because it depicts the very thing we are currently unable to share: the painting resonates with movement and communality, and embodies the deeply social nature of humans. I loved how Kathryn paints a combination of a remembered and imagined scene of reciprocity in tandem with a verdant landscape, it fills me with hope and longing to be part of this form of connection again.”

Juror, Jennifer Higgie said: “In Kathryn Maple’s wonderfully vivid painting The Common, a group of people meet in a verdant landscape. Although their bodies merge with the environment, each character remains unique. It’s a resonant work that skilfully situates intimacy and individuality within the larger drama of nature. Subject and technique harmonise: the surface of this enigmatic and dynamic painting is rich with texture and kaleidoscopic colour. It’s a worthy winner of the John Moores Painting Prize.”

Juror, Hurvin Anderson said: “The storytelling and characterisation in Kathryn Maple’s The Common is both vivid and intriguing.  I felt drawn into the gathering by a gradual reveal of detail while the dynamic colour palette adds drama to the immediate scene and the foliage beyond.  Kathryn’s effective composition is so evocative of the magic that can be found in the everyday human experience amidst the backdrop of nature. Kathryn achieves so much in this painting.”

The other four shortlisted works whose artists, who will each receive £2,500, are: The Neanderthal Futures Infirmary by Robbie Bushe, Compost by Michele Fletcher, The Motherland by Steph Goodger and March by Stephen Lee.

Also announced today is the winner of the Emerging Artist Prize, supported by Winsor & Newton. Kiki Xuebing Wang is the first winner of this award, developed to support artists in the early stages of their career. She is awarded £2,500 and premium art materials of the same value for her work, Untitled (Loafer).

Following Liverpool’s move into Tier 3 of the government’s Covid restrictions in October 2020, for the first time in the history of the Prize judging was all done online. High spec cameras, screens, speakers and AV software allowed judges to appreciate the scale, texture and detail of the works in real time. It also enabled a rich dialogue between the judges, a vital and cherished part of the process. Despite the changes an important fundamental of the competition remained in place with all judging done anonymously, allowing the artworks to speak for themselves. 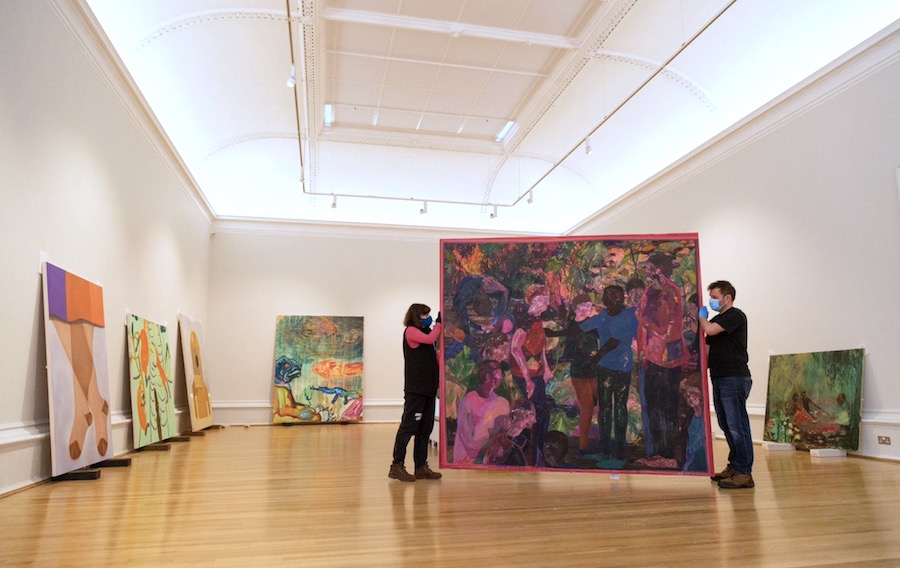 The exhibition was selected from almost 3,000 entries. From large scale canvases, bold in brush strokes and colour, to exquisitely detailed pieces, the exhibition covers a wide range of styles, united by their use of paint.

The full list of artists in the John Moores Painting Prize 2020 is here.

Five prizewinning paintings from the John Moores Painting Prize China will also be on show during the run of the exhibition. Organised by the College of Fine Arts at Shanghai University, the China Prize was launched in 2010 to support the development of painting in China.

Visitors are invited to vote for their favourite painting in the popular Visitors’ Choice Award. Now in its 11th year, the prize, sponsored by Rathbones, awards the winning artist £2,020.