Khadija Saye was amazingly talented, and her determination to study photography at university overcame challenging social conditions and an environment that could easily have held her back. I was lucky enough to have taught Khadija during her undergraduate studies 2010 – 13.

Khadija Saye was an important emerging artist, currently showing at the 2017 Venice Biennale

Khadija was born in London, the daughter of a migrant mother originating from Gambia. Tragically, Khadija and her mother Mary Mendy perished in the terrible fire at Grenfell Tower in London W11 early in the morning on 14th June 2017.

Khadija had a deep interest in postcolonial theory and identity politics at university. She was inspired by Stuart Hall and Kobena Mercer, and later informed by Black History Studies. She quickly established a framework to support and influence her work, while simultaneously exploring the history of portraiture and photographic techniques, alongside deeply personal biographical issues. She admired the work of Kara Walker, Lorna Simpson, Christina de Middel and Chris Ofili. 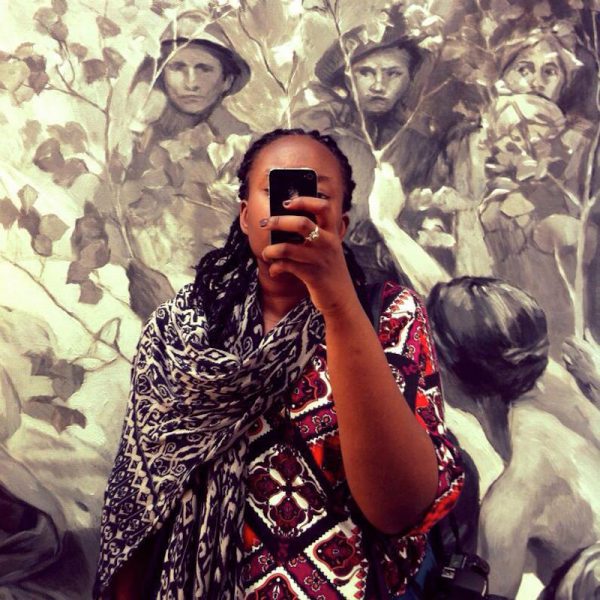 Khadija was thrilled when Barack Obama won a second term in the Whitehouse in 2012. She loved the music of Beyoncé, Jay-Z and Alicia Keys, as a constant background soundscape. Beyoncé’s album Lemonade and connection to ‘Black Lives Matter’ registered in Khadija’s cultural landscape; growing up in Latimer Road London W11, in a diverse community with a sense of pride.

Khadija’s highly anticipated trip to her ‘motherland’ produced ‘Home.Coming’ including stunning colourful portraiture shot in Gambia. This journey for Khadija was an important evaluation of her origins and contributed to her direction in photography.
Khadija Saye’s UCA graduate exhibition was a powerful series of images ‘Crowned’ (2013), shot in her home, on the twentieth floor of Grenfell Tower. Models for the Afro-Caribbean cornrow braided hairstyles were her friends, neighbours, and family. She used a black velvet background and inspired framing and perspective created work that was mature beyond her years and subsequently included in the Mall Galleries annual exhibition the Discerning Eye.

Khadija’s confidence grew after graduating by volunteering, involvement with contemporary art galleries, and eventually joining the International Curators Forum. Khadija Saye was an important emerging artist, currently showing at the 2017 Venice Biennale in the Diaspora Pavilion, aligned with artists such as Erica Tan and Isaac Julien. Created with the help of artist Almudena Romero is Khadija’s beautiful and poignant series Dwelling: in this space, we breathe, reflecting on Gambian spiritual practices, produced using wet plate collodion tintype photographic techniques.

‘Sothiou’ – a silk-screen print by Khadija Saye, is currently on display at Tate Britain in memory of the Grenfell Tower victims, and as a testament to her unique vision. Heartbreakingly cut short before her time.

Diaspora Pavilion is on show until 26 November 2017 at the Palazzo Pisani S. Marina in Venice.