2012 was a year of surprises in the London auction rooms. It wasn’t only Munch, Picasso and Warhol that made the headlines. South African artist, Vladimir Tretchikoff’s ‘Portrait of Lenka (Red Jacket)’ his muse and one time lover in Java, smashed its pre-sale estimate of £50,000- £80,000 to achieve an artist’s record of £337,250 at Bonham’s.  Tretchikoff became internationally known for his famous portrait of the ‘Green Lady’, a Woolworth’s framed print favourite.

Tretchikoff ((South African, 1913-2006) whose work is among the most reproduced in the world, found in Lenka the perfect muse. Bright and attractive, she was a Eurasian with a European father and a  Malay mother, and embodied the very fusion of East and West the artist was so keen on evoking.

The portrait of Lenka was owned by the Tretchikoff Estate. Lenka whose full name was Leonora Moltema, was Tretchikoff’s muse for the two and a half years he spent in Java during the Second World War. He had been separated from his wife and daughter when the war broke out. Towards the end of the war, he got word through the Red Cross that they were in South Africa and he left Java to find them.

A South African film maker Yvonne du Toit who produced a documentary on the artist, records, “When Tretchikoff was reunited with Natalie, his wife, after the war, he told her of his relationship with Lenka and offered her, as a personal gift, any of the works he had made during his Javanese period. She chose the portrait of Lenka and hung it above the dining room table”.

The portrait of Lenka expresses the East/West duality omnipresent in Tretchikoff’s work, a complete fusion of the Eastern and Western cultures. In this picture the Kriss [A Malayan dagger with a wavy double-edged blade] represents the Eastern traditions, and the tailored tunic the modes of the West, both of which have been assimilated by the beautiful woman.

It is easy to forget just how popular this artist was in the Post War years. At one point, Tretchikoff was every bit as popular as Picasso and Dali.  His work was successful on both a commercial and critical level. His life motto “Express your passion, do whatever you love, take action, no matter what” Still holds sway as to his commitment as a serious and yet truly Kitsch artist. 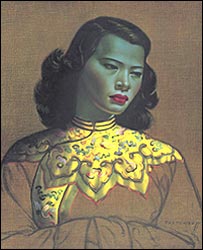