Klaus Littmann, the Swiss artist behind the major art intervention ‘For Forest – The Unending Attraction of Nature’ which took place in Klagenfurt, Austria in 2019, has expressed his concern about the similarity of a new project by the British stage designer Es Devlin for the London Design Biennial 2021 titled ‘Forest for Change’.

Imitation is the sincerest form of flattery – Oscar Wilde

Littmann started presenting theme-oriented art exhibitions in the public arena around 30 years ago. At the centre of his research lies the interest in everyday culture as well as the dialogue between contemporary Art and historically grown urban spaces. Underlying each of his complex and unique projects is a dichotic tension highlighting the artist’s preoccupation with everyday culture and the confrontation between contemporary Art and urban spaces. ‘Art should, by all means, go to places where people already are – that is to say, in the public realm ‘, he says; When he first saw the news about the project by Es Devlin, he was approached by many thinking this was a collaboration. ‘I simply cannot leave this misinterpretation to be unchallenged’, he says. ‘If you compare the two images – the visualization of the installation in Somerset House and the image of the temporary art installation in the football stadium in Klagenfurt – you can see the Forest for Change project as an imitation. In addition, the same topics are addressed as with FOR FOREST. Perhaps Es Devlin and her team were inspired by my project. If this is the case, I would have been happy if that had been communicated that way.’ 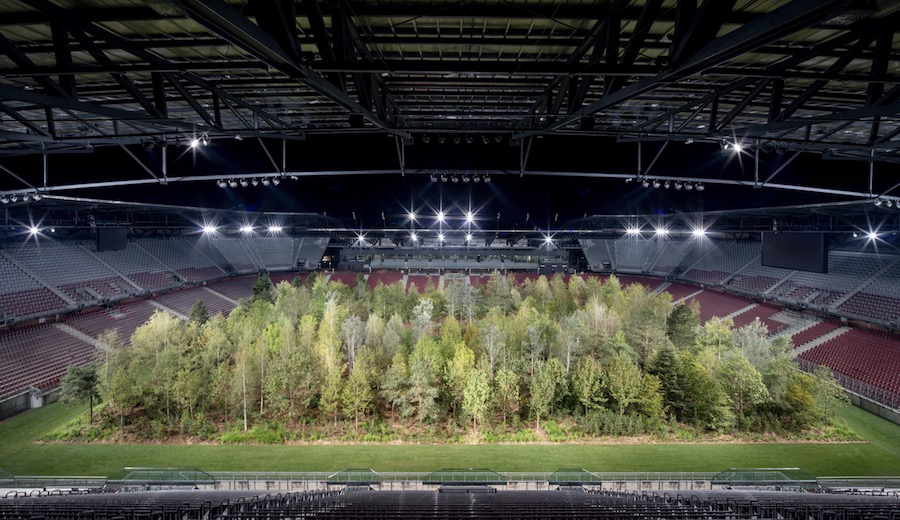 Klaus Littmann ‘For Forest – The Unending Attraction of Nature’ which took place in Klagenfurt, Austria in 2019

‘FOR FOREST’ campaigned for the most pressing problems related to climate change and deforestation and aimed to question our relationship to nature. ‘With this installation, I wanted to challenge our perception and sharpen our view of the future of the human-nature relationship’, he continues. The project saw itself as a memorial because one day, the self-evident nature of nature could only be marvelled at in specially assigned locations, as it is already happening today with animals in the zoo. The 2-month installation in Austria’s most modern football stadium was accompanied by a diverse supporting program of related satellite events such as exhibitions, cinema, music, literature, theatre, symposia, workshops, forest classes, talks by experts, etc., which dealt with the topics of nature and the environment.

Littmann says ‘The procedure adopted by Es Devlin for the dislocation and selection of trees is also similar to that one used for FOR FOREST. The internationally known landscape architect Enzo Enea was responsible for determining the trees and designing the mixed forest in the stadium.’
Littmann was not aware that someone was planning to create anything this similar to FOR FOREST. ‘While other artists are working with trees and there have been several before me, take Joseph Beuys, or Christo, each one of them had their own very individual message and artistic imprint’, he says.

‘Four artists, in particular, had a great impact on me and my work. These were Joseph Beuys, Kurt Schwitters, Jean Tinguely and Marcel Duchamp.’
When asked whether appropriation is a form of compliment, praise and respect or whether it’s just plain theft, he responds:
‘Appropriation is a principle of Art in itself. How did Oscar Wilde say? “Imitation is the sincerest form of flattery..”‘

Littmann’s future projects will see a two-part follow-up project of FOR FOREST that will take place in Basel, Switzerland, from 27th April to 11th July 2021.

The launch is marked by the temporary walk-in art intervention ‘Arena for a Tree’ on Basel’s Münsterplatz, followed by the exhibition’ Tree Connections’ at the Kulturstiftung Basel H.Geiger. The exhibition is dedicated to FOR FOREST and the tree as a versatile topic in art history – from the 19th century until today. 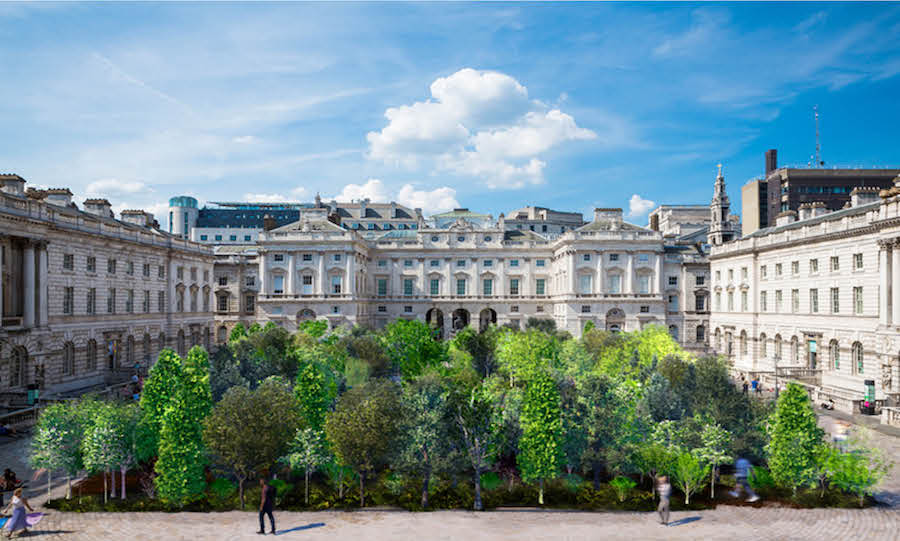 While in Klagenfurt, a football stadium was filled with 299 trees, here a single tree will become the main actor on the stage. ‘Perception is really a central theme in my projects; I question our eyes’ habits and irritate them. In Arena for a Tree, I do so by taking something we know in our everyday life and putting it in a new context. This forces people to question things that surround them and take for granted, in this case, trees’ he says.

‘Tree Connections’ at the KBH.G presents around 75 works by 45 artists, many of which have never been on public display.
The exhibition gives a strong emphasis to the Art of the 20th century. Here the tree is present in all forms of Art and representation. In the form of reliefs by Hans Arp, sculptures by Günther Uecker, Tony Cragg, Jannis Kounellis, Sol Lewitt, Giuseppe Penone, David Nash, project drawings by Christo, objects by Meret Oppenheim and of course in the works of Joseph Beuys, whose pupil I was at the Düsseldorf Art Academy in the 1970s.

Littmann says: ‘The beauty of nature, its presence around us as well as its indisputable necessity often go unnoticed. With this project, visitors might become aware of the fact that there is no future without nature and no life without a future. We have to reflect on what surrounds us.’