The gamble of selling it in a Post-War and Contemporary Art Evening Sale instead of an Old Master’s auction has paid off with totals $785,942,250 On a historic night at Christie’s in New York, Salvator Mundi, a depiction of Christ as ‘Saviour of the World’ by one of history’s greatest and most renowned artists, sold for $450,312,500 / £342,182,751 (including buyer’s premium), becoming the most expensive painting ever sold at auction.

This record-breaking price reflects the extreme rarity of paintings by Leonardo da Vinci — there are fewer than 20 in existence acknowledged as being from the artist’s own hand, and all apart from Salvator Mundi are in museum collections. The painting despite being in a poor and over-restored condition didn’t deter bidders on the night.

The international interest in the work hailed as one of the most important artistic finds of the last 100 years saw a rapt audience of nearly 1,000 art collectors, dealers, advisors, journalists and onlookers packed into the main auction room at Rockefeller Center, with many thousands more tuning in via a live stream. Since the sale of Salvator Mundi was announced on 10 October at Christie’s, almost 30,000 people have flocked to Christie’s exhibitions of the ‘Male Mona Lisa’ in Hong Kong, London, San Francisco and New York — the first time the painting had ever been shown to the public in Asia or the Americas. 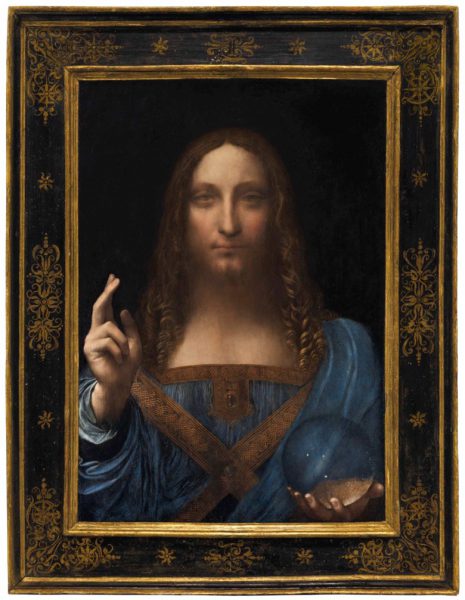 The inclusion of Salvator Mundi in the National Gallery’s landmark 2011-12 exhibition of Leonardo’s surviving paintings — a complete display of such works ever held — sealed its acceptance as a fully autograph work by Leonardo da Vinci. This came after more than six years of painstaking research and inquiry to document the painting’s authenticity. It was process that began shortly after the work was discovered — heavily veiled with overpaints, long mistaken for a copy — in a small, regional auction in the United States in 2005. Before that, it was consigned to a 1958 sale at Sotheby’s where it sold for £45.

The previous holder of the record price for an Old Master painting was Massacre of the Innocents by Peter Paul Rubens, which sold for $76.7 million (£49.5 million) in 2002. The previous auction record for Leonardo da Vinci was set at Christie’s in 2001 when Horse and Rider, work on paper, sold for $11,481,865. The previous record for the most expensive work of art at auction was set in the same Christie’s saleroom when Picasso’s Les Femmes d’Alger (Version ‘O’) achieved $179,364,992.
These records were obliterated when Jussi Pylkkänen, Christie’s Global President, brought the hammer down on Lot 9 after an extraordinary bidding battle that lasted just short of 20 minutes. The contest boiled down to two bidders, with the increments jumping at one point from $332 million to $350 million in one bid, and then, at just short of 18 minutes, from $370 million to $400 million. Gasps were heard in the saleroom, which gave way to applause when Christie’s co-chairman Alex Rotter made the winning bid for a client on the phone.

‘It is every auctioneer’s ambition to sell a Leonardo and likely the only chance I will ever have,’ said Pylkkänen. ‘It’s the pinnacle of my career so far. It is also wonderful for an Old Master to be at the centre of such attention. The excitement from the public for this work of art has been overwhelming and hugely heartening.’

Andy Warhol’s Sixty Last Suppers from 1986 — an outstanding example from the artist’s great final painting series, and the largest painting by the American Pop artist ever to come to auction — sold for $60,875,000. Based on Leonardo’s Renaissance masterpiece, the monumental piece is from a group of works created by Warhol on the suggestion of Milan-based gallerist Alexander Iolas in 1984.

The sale also saw strong demand for works from exceptional collections. The superb American Abstract Expressionist works acquired by Heinz and Ruthe Eppler — the first comprehensive survey to be offered at auction since 2012 — were among the evening’s highlights, with Franz Kline’s Light Mechanic producing the highest price when it was acquired for $20,000,000. The running total for The Eppler Collection stands at $71,943,500, with more works to be offered on Thursday.

The sale’s three works from the Collection of Nancy Lee and Percy R. Bass, which produced outstanding results in Monday’s Impressionist & Modern Art Evening Sale, were also highly sought after, with top honours going to Mark Rothko’s Untitled (1969), which sold for $11,000,000. The collection’s total moved to $161,149,750 with more works to come in the Post-War and Contemporary Art Day Sale.

Kerry James Marshall (B. 1955), Still Life with Wedding Portrait, painted in 2015. 59 1/2 x 47 1/2 in. (151.1 x 120.6 cm.). Sold for $5,037,500 in the Post-War & Contemporary Art Evening Sale on 15 November 2017 at Christie’s in New York. New world auction records for the artists were set with the first three works offered in the sale: Adam Pendleton’s Black Dada (K), Philippe Parreno’s My Room is Another Fish Bowl and Kerry James Marshall’s Still Life with Wedding Portrait. It set the tone as further auction highs were established for Vija Celmins, William Baziotes, Lee Krasner, Hans Hofman, Julian Schnabel and, in the very last lot of the night, Isamu Noguchi. Further records by medium were set for works by Alexander Calder, Mark Rothko, Jean Dubuffet and Richard Serra.

At a packed post-sale press conference Guillaume Cerutti praised the ‘incredible teamwork’ that led to the historic result for the Leonardo. ‘But in every team,’ Cerutti added, ‘there is a catalyst, and in this case, it was Loic Gouzer.’

Gouzer, the co-chairman of Post-War and Contemporary Art at Christie’s, talked of the ‘incredible journey’ this sale had involved, and how the ‘painting had captivated the imagination of so many people.’ Leonardo da Vinci’s Salvator Mundi not only became the most expensive work of art in history but more than doubled the previous auction record. It was, said Cerutti, ‘a great moment for Christie’s and a great moment for the art market.’