Priceless Leonardo da Vinci drawings are set to tour Britain as part of celebrations to mark the 500th anniversary of his death. One hundred and forty four drawings many considered the rarest examples of his work are going on display in 12 cities.

The exhibition will include two da Vinci drawings, studies of hands, which when placed under ultraviolet light revealed previously unknown images by the master. These have never been shown in past exhibitions. The studies of hands for the Adoration of the Magi were found on what was first thought to be completely blank pieces of paper. The drawings were revealed when the pages were examined in ultraviolet light. They had been among the 550 da Vinci sheets bound into a single album, acquired by Charles II. Both the sheets of paper and the ultraviolet photographs will be displayed. All the pieces have been selected to reflect the full range of da Vinci’s interests, including painting and sculpture. 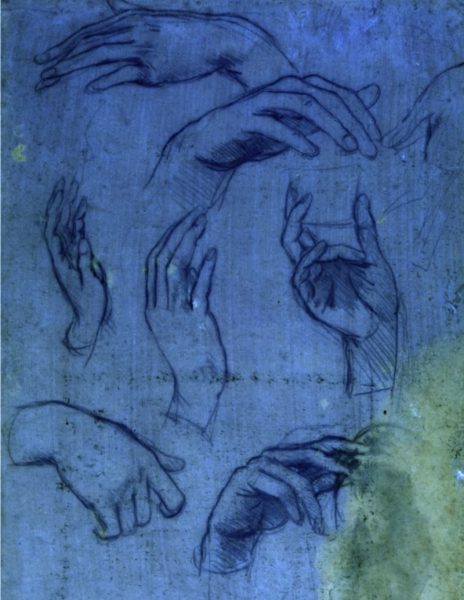 Curated by the Royal Collection, the da Vinci drawings will also reflect his passion for architecture, music, anatomy, engineering, cartography, geology and botany. The exhibitions will also include examples of all the drawing materials employed by the artist, including pen and ink, red and black chalks, watercolour and metal-point.  A drawing showing mortars firing into a fortress will go on display in Sunderland Martin Clayton, head of prints and drawings at the Royal Collection Trust, said: “The drawings of Leonardo da Vinci are a national treasure, both incredibly beautiful and the main source of our knowledge of the artist.

The Vitruvian Man (Italian: Le proporzioni del corpo umano secondo Vitruvio, which is translated to “The proportions of the human body according to Vitruvius”), or simply L’Uomo Vitruviano (Italian pronunciation: [ˈlwɔːmo vitruˈvjaːno]), is a drawing by Leonardo da Vinci around 1490. It is accompanied by notes based on the work of the architect Vitruvius. The drawing, which is in pen and ink on paper, depicts a man in two superimposed positions with his arms and legs apart and inscribed in a circle and square. The drawing and text are sometimes called the Canon of Proportions or, less often, Proportions of Man. It is kept in the Gabinetto dei disegni e stampe of the Gallerie dell’Accademia, in Venice, Italy, under reference 228. Like most works on paper, it is displayed to the public only occasionally.

The da Vinci drawing is based on the correlations of ideal human proportions with geometry described by the ancient Roman architect Vitruvius in Book III of his treatise De architectura. Vitruvius described the human figure as being the principal source of proportion among the classical orders of architecture. Vitruvius determined that the ideal body should be eight heads high. Leonardo’s drawing is traditionally named in honor of the architect.

Leonardo di ser Piero da Vinci (Italian: [leoˈnardo di ˌsɛr ˈpjɛːro da (v)ˈvintʃi] ( listen); 15 April 1452 – 2 May 1519), more commonly Leonardo da Vinci or simply Leonardo, was an Italian Renaissance polymath whose areas of interest included invention, painting, sculpting, architecture, science, music, mathematics, engineering, literature, anatomy, geology, astronomy, botany, writing, history, and cartography. He has been variously called the father of palaeontology, ichnology, and architecture, and is widely considered one of the greatest painters of all time. Sometimes credited with the inventions of the parachute, helicopter and tank, he epitomised the Renaissance humanist ideal.
Many historians and scholars regard Leonardo as the prime exemplar of the “Universal Genius” or “Renaissance Man”, an individual of “unquenchable curiosity” and “feverishly inventive imagination” and he is widely considered one of the most diversely talented individuals ever to have lived. According to art historian Helen Gardner, the scope and depth of his interests were without precedent in recorded history, and “his mind and personality seem to us superhuman, while the man himself mysterious and remote”. Marco Rosci notes that while there is much speculation regarding his life and personality, his view of the world was logical rather than mysterious, and that the empirical methods he employed were unorthodox for his time.

The exhibitions will take place in Belfast, Birmingham, Bristol, Cardiff, Glasgow, Leeds, Liverpool, Manchester, Sheffield, Southampton and Sunderland, with a further venue to be announced. Following on from the main exhibitions next February, in May 2019 they will be brought together to form part of an exhibition at The Queen’s Gallery, Buckingham Palace. This will be the largest exhibition of da Vinci’s work in more than 65 years.

“We hope that as many people as possible across the UK will take this unique opportunity to see these extraordinary works, which allow us to enter one of the greatest minds in history, and to understand the man and his achievements.”