The “Dark Side of Liberty, an exhibition launched with much fanfare at Liberty’s flagship Regent Street shop has removed a number of artworks and cancelled scheduled performance pieces. The exhibition which officially opened on 6 July, takes inspiration, “from London’s subcultures and Pink Floyd’s exploration of the conflict and turbulence of the Seventies, to create an immersive experience complete with mixed media art installations and live music performances.” Work by Jared Madere was removed from the atrium of Liberty London. The exhibition was curated by Victor Benady and included works by Julie Verhoeven, Architecture Social Club, Joris Van De Moortel, and Alex Morrison other pieces were taken down or in the case of performances canceled.

Mark Forsyth, Liberty’s head of brand communications, said in a statement, On behalf of the department store. “Liberty London is delighted to have launched ‘The Dark Side of Liberty’ summer art exhibition. Reluctantly due to technical issues two of the works will no longer be on display as previously advertised,” the statement read. “However, customers can still enjoy the works by the other artists both in the windows and around the store. We would like to thank all the artists involved for their hard work and commitment to this project.” Verhoeven’s work is now covered by blinds, and the lights have been turned off on the Van De Moorel installation. 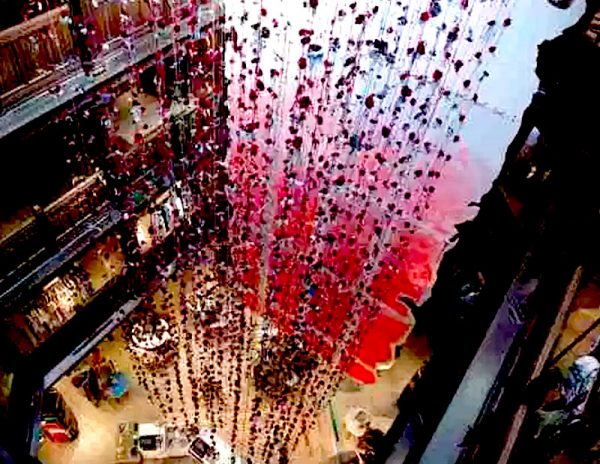 Liberty described it as, “A post-digital eye on ‘60s Soho: a flourishing counterculture of rebellion, expressed through music, fashion, art and political protest. Now in an era of fake news and social media, we’re rediscovering our local neighbourhood and celebrating the creativity that continues to linger within it; unveiling new, all-inclusive subcultures, where experience and physicality are the common threads. Calling upon three artists to interpret the sights and sounds of today, we present audio-visual representations of the way we live now – inviting you to discover our summer exhibition: The Dark Side of Liberty. Here, now, the boundaries are limitless.”

They continued, “This year has been about reinstating Liberty London as the home of the artistic shopper, so we wanted to revisit our cultural roots and celebrate art and culture today. Liberty London has always had a dark side, a gothic English intelligence; we look for the unique, the weird and the wonderful in everything we do,” said Liz Silvester, the store’s head of creative, who worked on the project alongside curator Victor Benady.

Benady and Silvester recruited five creatives to interpret the theme through a range of installations featured across the department store, from its windows to the main atrium and its new men’s department. Artists Jared Madere, Alex Morrison, Joris Van de Moortel and Julie Verhoeven, as well as the architect Satyajit Das have taken part in the project.

Van de Moortel, an artist, and musician from Belgium, recreated a recording studio as part of his installation, which is displayed in the store’s windows. On July 5 for the preview, de Moortel’s recording studio will be taken over by experimental musicians Mauro Pawlowski and Carlo Adriani, who will put on a live psychedelic music performance for passersby. Another store window will be transformed by the Canadian artist Morrison, who created a sculptural installation using Liberty prints.

Inside, the store’s main atrium a 12-meter comet sculpture by Madere, as well as a metallic pig sculpture by Das, which was designed to give the illusion that it’s breathing and references Pink Floyd’s “Animals.”

Benady said these installations aimed to celebrate “the physical and the experiential,” which is becoming more and more crucial for the future of retail. “In a post-digital world of drones and artificial intelligence, of social media and fake news, where the virtual is copied and commoditized, we believe that experience, physicality and materiality are the new currency.”

The launch of the exhibition coincided with the opening of Liberty’s new men’s department. Julie Verhoeven, who created an installation incorporating illustration and animation for the store, will also add her psychedelic drawings on murals in the new department.