The Golden Lion awards for Best National Participation at the 58th Venice Biennale has been announced. Lithuania’s Sun & Sea (Marina) an immersive sound installation on an artificial beach impressed the judging committee. The International Art Exhibition, titled May You Live In Interesting Times, was curated by Ralph Rugoff and organized by La Biennale di Venezia chaired by Paolo Baratta. The awards ceremony and inauguration were held on Saturday 11th May 2019.  The title of this Exhibition could be interpreted as a sort of curse – stated President Paolo Baratta – where the expression “interesting times” evokes the idea of challenging or even “menacing” times, but it could also simply be an invitation to always see and consider the course of human events in their complexity, an invitation, thus, that appears to be particularly important in times when, too often, oversimplification seems to prevail, generated by conformism or fear. And I believe that an exhibition of art is worth our attention, first and foremost, if it intends to present us with art and artists as a decisive challenge to all oversimplifying attitudes. Here is the list of winners. 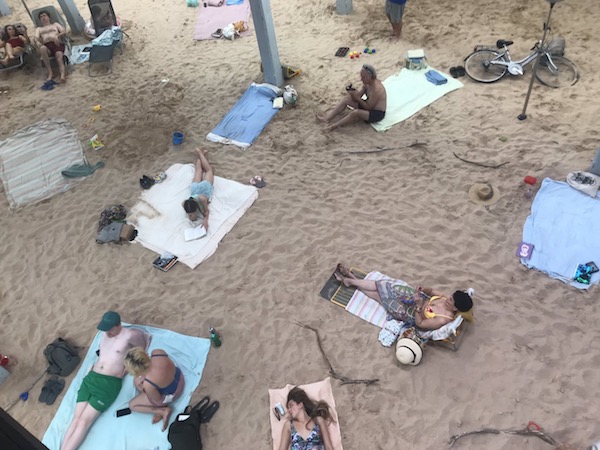 A special mention has been awarded to the following National Participation:

Golden Lion for the Best Participant in the International Exhibition May You Live In Interesting Times to:

Silver Lion for a Promising Young Participant in the International Exhibition May You Live In Interesting Times to:

Haris Epaminonda
(b. 1980 Republic of Cyprus, lives and works in Berlin)

The Jury has decided to award two special mentions to the following participants:

Teresa Margolles
(b. 1963 Mexico, lives and works in Mexico City and Madrid)

Otobong Nkanga
(b. 1974 Nigeria, lives and works in Antwerp)

The Awards Ceremony of the 58th International Art Exhibition took place today, 11th May 2019, at Ca’ Giustinian, Venice. Upon recommendation of the Curator of the 58th Exhibition Ralph Rugoff, the board of La Biennale di Venezia, chaired by Paolo Baratta, also awarded the Golden Lion for Lifetime Achievement to Jimmie Durham (USA).

Golden Lion for Best National Participation to Lithuania for the experimental spirit of the Pavilion and its unexpected treatment of national representation. The jury was impressed with the inventive use of the venue to present a Brechtian opera as well as the Pavilion’s engagement with the city of Venice and its inhabitants. Sun & Sea (Marina) is a critique of leisure and of our times as sung by a cast of performers and volunteers portraying everyday people.

Special mention as National Participation to Belgium. Unsparing in its humour, the Belgian Pavilion offered an alternative view of the under-recognised aspects of social relations across Europe. The uncanny staging of a series of fictional characters in the form of mechanised puppets based on folkloric stereotypes allow the Pavilion to act on several registers, while creating two if not more parallel realities.

Golden Lion for the Best Participant in the International Exhibition May You Live In Interesting Times to Arthur Jafa for his 2019 film The White Album (venue: Central Pavilion, Giardini), which, in equal measure, is an essay, a poem and portraiture. Jafa uses appropriated and original footage to reflect upon the issue of race. Just as the film critiques a moment fraught with violence, in tenderly portraying the artist’s friends and family, it also speaks to our capacity for love.

Silver Lion for a Promising Young Participant in the International Exhibition May You Live In Interesting Times to Haris Epaminonda for her carefully constructed constellations of images, objects, text, forms, and colours that are built out of fragmented memories, histories and imagined connections; for showing us that the personal and the historical can be compressed into a powerful yet loose web of multiple meanings.

This year, two Special Mentions were awarded to the following participants:

Teresa Margolles for her sharp and poignant works that deal with the plight of women grossly affected by the narcotics trade in her native Mexico, and for creating powerful testimonies by shifting existing structures from the real world into the Exhibition halls.

Otobong Nkanga for her ongoing and inspired exploration across media into the politics of land, body and time.