Liverpool Biennial has launched their programme for their 11th Edition happening in spring 2021, running from 20 March – 6 June, with previews held on 18 and 19 March. Despite internal political difficulties resulting in the departure of the Biennial Director Fatos Üstek, the show must go on. Üstek oversaw 80% of what you’ll see at the event but seems to be written out of the press release.

The programme of commissioned exhibitions, screenings, sculpture and sound will unfold over 12 weeks, showcasing and celebrating the city’s most iconic buildings and architecture. New venues announced include the historic Lewis’s Building which will host 16 works. The Grade II listed former department store is well-loved by Liverpool’s residents and after 10 years of closure, the site will be reopened for LB2021, with two floors dedicated to a wide array of multi-disciplinary art works, including many new commissions.

Titled ‘The Stomach and the Port,’ Liverpool Biennial 2021 explores notions of the body and ways of connecting with the world, drawing on non-Western ways of thinking and challenging an understanding of the individual as a defined, self-sufficient entity. Instead, the body is seen as fluid and without limits, being continuously shaped by and actively shaping its environment. The city of Liverpool’s dynamic history as an international port city and a point of global contact and circulation, provides the perfect ecosystem for this Edition and the artists involved have a strong connection and admiration for the city.

The artists and thinkers collaborating on this Edition committedly question the rigid categories defined and perpetuated by colonial capitalism through their expression. Their practices embrace kinship, co-dependence and embodied knowledge. This programme remains rooted in a commitment to decolonise our thought processes and our experience of the world, demanding a re-calibration of the senses, an acceptance of vulnerability and the recognition of our own privileges and prejudices. It is much more than a reflection; it must be integral to all aspects of our life as we move into this new future.

Liverpool’s position as a port and hub of cross-cultural encounters, circulation, distribution and global transnational mobility – along with its difficult history of humans forcibly moved from Africa to the Americans and beyond – is central to the narrative of this Edition. It is a bringing together of the near and far with notions of movement and digestion; the stomach’s role within the body and the movement from inside to outside, on a global scale.

During such unprecedented times, art can be the most powerful place to go, through a wide variety of practices – from sound, to film, to sculpture, to dance – all art opens up our understanding. It positions us as active participants in this process of change and asks us to reconsider what we know and how we know it.”

The public programme of performances and events for the 11th Edition will be announced in January 2021, to ensure that the Biennial can provide clear details of the safest attendance procedures for our artists, partners, supporters and audiences.

Many of the partner venues will also showcase exciting exhibitions that run alongside the Liverpool Biennial programme. Highlights include ‘AI: More Than Human’ exhibition (Barbican 2019) arriving at the World Museum on 22 January. The UK’s biggest painting competition, The John Moores Painting Prize, opens at the Walker Art Gallery on 12 February. Aliza Nisenbaum’s paintings of Merseyside’s NHS Frontline workers will be unveiled at Tate Liverpool on 15 December. All exhibitions run until the final week of June. Running alongside the Biennial, FACT will also present a solo presentation of the Liverpool-based artist Kiara Mohamed, including a new moving image work, and curated by Fauziya Johnson.

Liverpool Biennial will once again be releasing a collection of limited edition prints by selected artists when the festival opens in March 2021.

The list of participating artists can be found below:

Alys Tomlinson has won first prize in the prestigious Taylor Wessing Photographic Portrait Prize 2020 for Lost Summer, her series of black and white portraits of London school leavers dressed up for their proms, which were cancelled due to the Coronavirus pandemic. The winner of the £15,000 first prize was announced today, Tuesday 24 November, on the National Portrait Gallery’s social media channels. Second prize was awarded to Lydia Goldblatt for Eden, a portrait of her young daughter alone in her garden during lockdown. Yolanda Y. Liou was awarded third prize for her portrait of model, plus size advocate and Instagram influencer, Enam Ewura Adjoa Asiama.

The winning portraits are now on display in a new online exhibition on the National Portrait Gallery’s website, featuring 54 portraits from 37 different artists selected for display by a panel of judges including Edward Enninful, Editor-in-chief of British Vogue, photographer Mark Neville and Penny Martin, Editor-in-Chief of The Gentlewoman. This is the first time in the history of the award that all the prize-winning photographers are women. 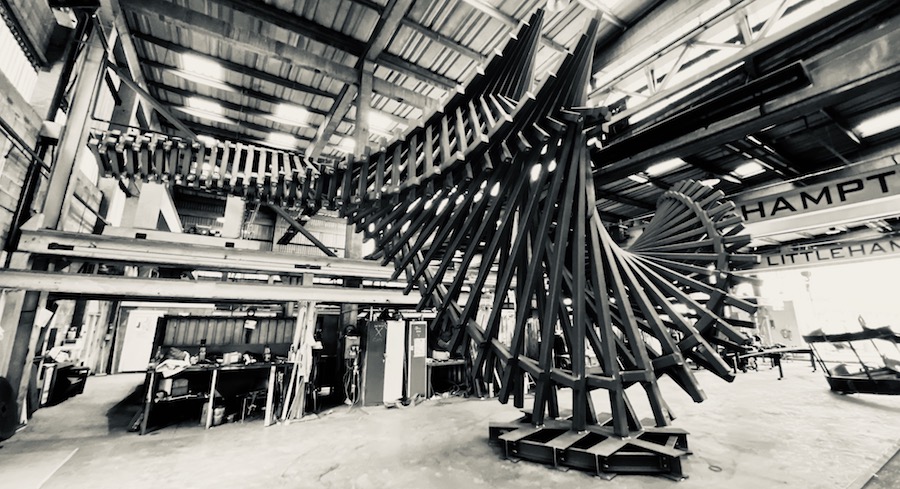 In Texas, the Belt-Line Road stretches thirty miles in a straight line through the hills and valleys between Dallas and Fort Worth. If you pause at the Olympus crossroad to North Lake, you will find DRIFT, the latest sculpture by Gerry Judah, dazzling in the sun like the bleached bones of an ancient leviathan. The installation; cut, welded and ground from steel has its origins in the green fields of England and the mountains of New Zealand. It’s the latest in a series of sculptures exploring writhing, twisting forms assembled from stacks of steel blocks.

At 6.3 metres high and 13 metres long, DRIFT spreads horizontally, a counterpoint to Gerry Judah’s MAZDA, 2015 sculpture at Goodwood Festival of Speed, West Sussex, and JACOB’S LADDER, 2018sculpture in the deep hills of Gibbs Farm Sculpture Park, New Zealand. Three hundred and ten steel blocks varying in thickness from 60mm to 140mm are carefully stacked, each at a slightly different angle to the one before, to form a gently flowing wisp, floating in the air like eighteen and a half tonnes of frozen steel smoke.

Built for a huge temperature range and high winds – being at the southern end of Tornado Alley – DRIFTwas engineered to meet the most demanding American wind and seismic codes. The sculpture was designed, engineered, fabricated and painted in the United Kingdom and shipped to the United States in three custom-built crates ready for lifting and bolting on-site by a local US crew.

DRIFT was commissioned by Billingsley Company as an indelible gateway into The Sound at Cypress Waters community. “After being enchanted by JACOB’S LADDER, we sought out the artist and began a conversation with him regarding a site-specific sculpture for The Sound. We provided Mr Judah with topographical information and he became familiar with our landscape intentions. The sculpture he designed beautifully accommodates the complexities of the location; DRIFT provides a dynamic and gripping artistic foundation for this community,” said Billingsley Company Partner, Lucy Billingsley.