An Artist-led campaign to save a street dubbed the ‘Living War Memorial’ has resulted in a dramatic victory for a community stirred into art-activism.

A remarkable story of a community artists’ campaign to save an avenue of trees in Sheffield has finally resulted in a dramatic U-turn by a council. 53 trees in Western Road, were planted in 1918 by the pupils of the now Westways School to honour the ex-pupils who never returned from the Great War. The London plane, Lime, Sycamore and Ash trees are registered by the Imperial War Museum and the War Memorials Trust as living war memorials. Two years ago it was announced that the majority of these trees would be cut down in a severe widespread mass destruction of 40,000 street trees in Sheffield – the UK’s greenest city. 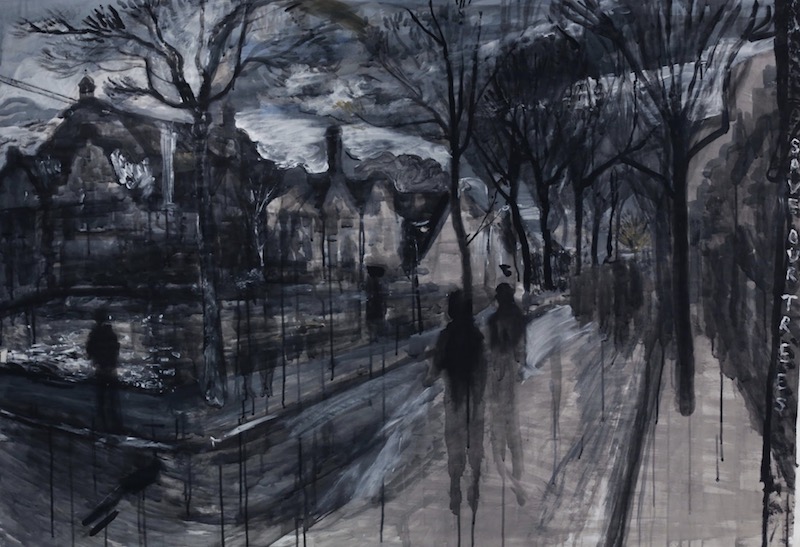 Painting by Dan made on the Western Road in 2017

Before long, the residents of Western Road and campaigners who were formed under an organisation call STAG (Sheffield Tree Action Group) led by retired actor David Dillner decided an awareness campaign was needed.
In 2017 ‘The Treehunter’ Rob McBride – a national tree campaigner – contacted artist Dan Llywelyn Hall and invited him to visualise the plight through some drawings or paintings. After the visit by Dan, he became compelled to record some examples of the trees under threat with particular focus to the Western Road trees – having painted a portrait of the last Tommy, Harry Patch that was exhibited at the National Portrait Gallery at the time of the veteran’s passing in 2009.
What emerged was a body of work made on the street that created a wave of national interest in the campaign, and soon enough an idea was unhatched with local, Sarah Deakin, to mount a day-long Armistice paint-out in 2017 of the 53 trees by over 100 artists from all corners of the country. What followed was a large-scale exhibition ‘Fallen Boys, Standing Trees’ in Sheffield of all the work made by amateur and professional artists alike from the campaign. (listed below)

Roll on one-year later. On the eve of the centenary of the Armistice, the news broke that Sheffield Council made a dramatic U-turn in their decision to spare the trees under the weight of community pressure which was much welcome news and a momentous success for a bewildered community.

Dan said ‘There is a role for art in protest, as it clearly helps both visualise the cause and capture the imagination of an audience disconnected from the geo-specific and help galvanise much greater activism. What I discovered from my location paintings of these trees, was firstly the cathartic nature of searching for the individuality and personality of these beauties then how an affiliated cause can be expressed through the exploration of beauty. Art- as a form of protest, has a slow-burn endurance that permeates in a way that words don’t; communities are invigorated when a shared cause is elevated through self-expression, a sort of collective individualism where all voices are heard in one clear message of defiance.’

Sarah Deakin who helped organised the ongoing art campaign says ‘Art can offer people a way to express themselves, and the brush is sometimes mightier than the sword. For some residents of Sheffield, what started as a simple way to appreciate street trees among friends has quickly grown into something much more. It’s a very gentle, passive way of getting the message across to people who might not be aware of what’s going on or who don’t want to see an active protest – they might feel a bit threatened to talk to people in that sort of situation. So it’s a much more gentle way of just sharing our love of the trees. The movement caught on. It’s become a way of supporting residents who have been affected by the felling of trees, and it’s resonated with many.’

LINK TO ALL IMAGES OF THE 53 TREES:

Names of the participants in Fallen Boys, Standing Trees 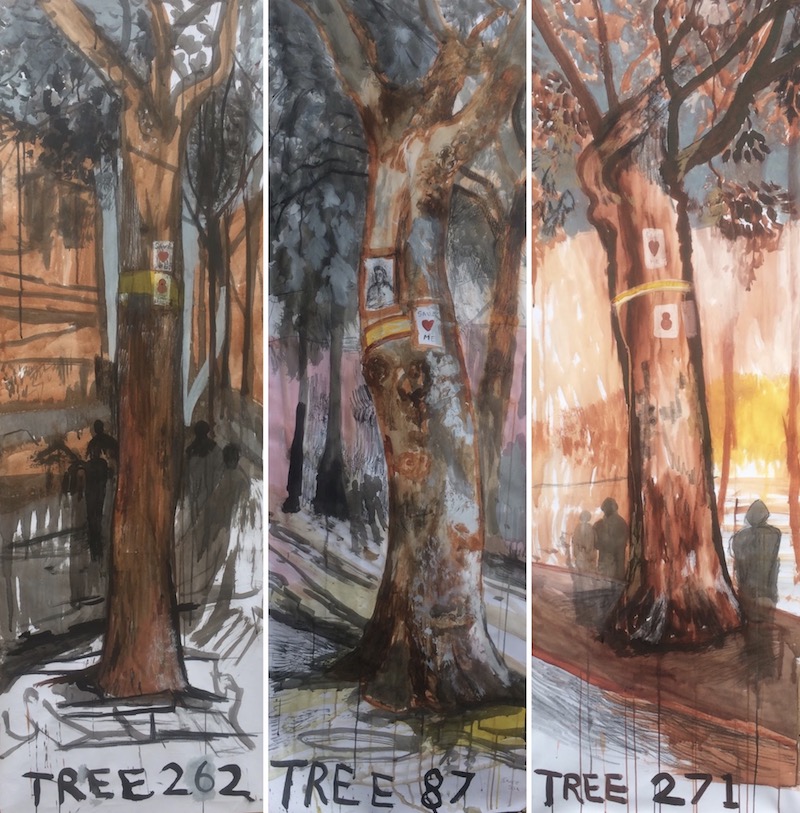 Painting by Dan made on the Western Road in 2017