Being asked to write about an art fair is a bit like being commissioned to write about Waitrose and compare tins of baked beans with sardines or chocolate biscuits. These items have little in common, except they are all food and sold in the same venue. Pretty much the same can be said of the modern art fair if you substitute art for food. The variety is enormous from the good, the bad, to the merely ugly. Occasionally, if you’re lucky, you may come across something outstanding.

For many years the London Art Fair, once the big hitter in town, seemed to suffer an identity crisis after the arrival of that parvenue Frieze. But over the last few years under the direction of Sarah Monk it has settled into a valuable role promoting Modern British Art, whilst also cultivating an interesting Art Project space on the upper floor – now in its 16th year and featuring 18 galleries from 5 countries – where younger artists and innovative dealers can exhibit. 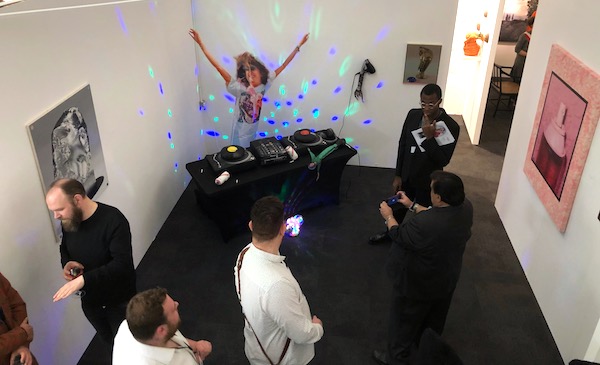 There’s a diverse range of work this year.  At the Eagle Gallery/EMH Arts, the painter on show is not young. Natalie Dower is in her 80s, but her work is worth looking at because it’s fresh and intelligent, embracing the vocabulary of Thirties Vorticism, along with colour theory and geometry. These have been hung in conversation with a range of younger artists that includes an abstract paperwork by Andrew Bick. At the other end of the visual spectrum, Standpoint is showing sculptures by Anna Reading. At once both familiar and odd, they sit somewhere between architecture and biomorphic forms. While in the Arts Project Screening Room the exhibition, Playtime, topically asks how we assess and commodify contemporary ideas of leisure.

This year Alister Hicks has guest-curated Dialogues, which pairs international contemporary galleries in conversation around the theme Talk! Talk! Talk! that focuses on the battle between text and image. Domobaal has included Christopher Hanlon. an interesting painter trained at the Royal College, who paints everyday objects, including stones and aspidistra. These have an uncanny feel. Rooted in the tradition of painting, they engage the viewer in a conversation that subverts the very genre in which they have been fabricated. In contrast, on Division of Labour’s stand, Rosie McGinn’s inflated figures bop up and down like demented, hipsters, challenging you to either love or hate them. The second edition of Platform, Threading Forms curated by Candida Steven, demonstrates the variety of fine art textiles with work that includes the hand-stitched and the machine-made, tapestry, deconstructed fabrics and collage. While Photo50, inspired by Gaston Bachelard’s Poetics of Space, focuses on three main issues: how women occupy space, the psychological effects of space, and how time affects space. 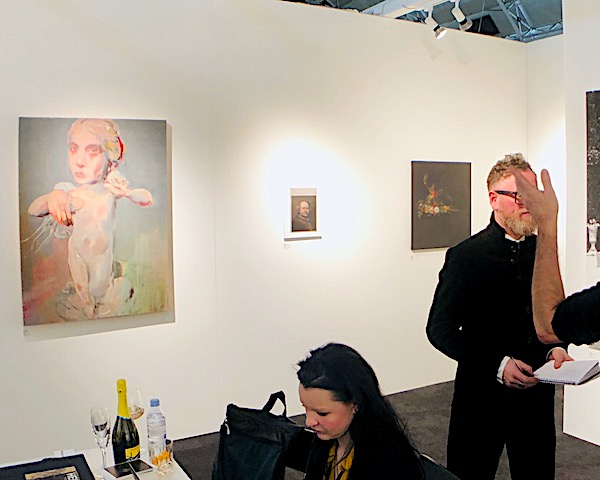 The 2020 London Art Fair Museum Partner is the Southampton City Art Gallery. Anyone interested in Modern British art is in for a treat. The works selected reveal the depth and variety of the collection, which has been ‘designated’ by the Arts Council of England as having ‘pre-eminent national significance’. It includes paintings from the Camden Town Group and St. Ives, through to works by Turner prize nominees and winners. Some of the gems on show here are Mark Gertler’s poignant The Rabbi and His Grandchild, 1913, C. W. Nevinson’s tautly modernist Loading Timber Southampton Docks 1917, and a gloriously ebullient Roger Hilton, Figure 61. In the commercial galleries, there are still a number of fine Modern British paintings for sale such as Ivon Hitchens’ Yellow Autumn from a Terrace 1948 at Osborne Samuel.

Other works that caught my eye as I wandered through the many booths were the fine seascapes by Irish artist Donald Teskey at Art First, and the exquisitely detailed pigment prints of trees by Santeri Tuori at Purdy Hicks.  While at Giles-Baker Smith there were some rather beautiful tondos of imagined landscapes and cloudy moonlit nights, inspired by photography and English Romanticism, by Gill Rocca.

This is an art fair where, if you are a novice collector, you can still find things worth buying for under a thousand pounds. While for those of you feeling flush there are some very good examples of British Modernism to be had for your walls.

Sue Hubbard is an award-winning novelist, poet and freelance critic. Her latest novel Rainsongs is available from Duckworth and her fourth poetry collection Swimming to Albania is due from Salmon Press this spring.