Each January the London Art Fair takes over the Business Design Centre for a week of exhibiting and schmoozing.  With over 100 galleries present it can be overwhelming trying to see everything on display. Much of the fair is taken up with ‘Modern British’ art from the Post War years and there are some fine pieces on display. However, the Art Projects section, now in its eighth year, has been consistently praised for being the most exciting aspect of the fair. Art Journalist, Pryle Behrman, the organiser has worked on Art Projects as curator since its inauguration in 2005 and is curating Art Projects again this year. Many of the thirty galleries and the Video selection in the Art Projects are relatively new or small, but they prove that fresh and interesting things are happening in contemporary art. 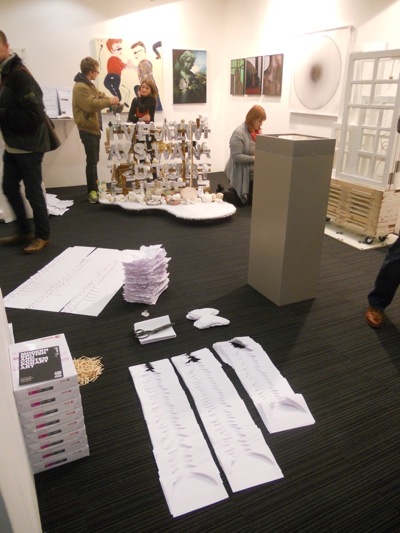 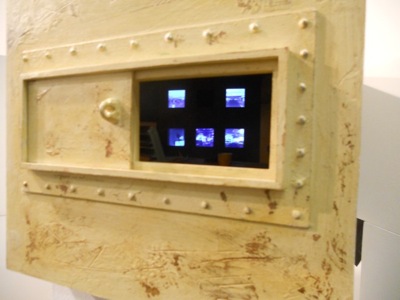 The Artist-Led Initiatives Support Network (A.L.I.S.N.) project rented a stand at the London Art Fair with a unique view in mind: subletting.  True to their ethos of providing opportunities and support to artist-led projects, seventeen organisations come together to share the space and experience.  Featuring performances, installations, film, photography, and other media A.L.I.S.N.’s stand demonstrates the vibrancy and creativity of contemporary art. The Video projects at this years fair has included three ALISN submissions, outstanding is David Blandy’s film contribution through MOCA.  On Friday performance group ]performance s p a c e [ set up an office of mundane tasks working from 9 to 5.  The Dover Arts Development (DAD) showcases the work of six photographers who have worked with the organisation in the past five years.  Occupy My Time gallery is displaying works by Shona Davies and David Monaghan that explore voyeurism and power relationships through slightly unsettling miniatures – as though gazing into a separate and tiny world.  ArtLyst is also excited to be a part of A.L.I.S.N.’s shared stand.  Artist-led spaces and organisations are often constricted by limited funding and see little commercial success, but as the press release notes, “SUBLET has transformed the art fair booth from a stand into a stage,” creating a platform for creativity to the artists and exposure to surprising and interesting projects for fair visitors. 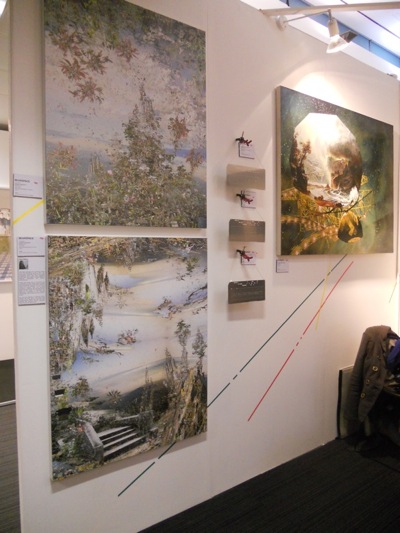 Based in Deptford, Bearspace brought an innovative exploration of science fiction and science reality through the artistic perspective to the fair.  Artists working in painting, photography and mixed media sculpture create alternately utopian and dystopian worlds where nature and technology are intermixed.  This is probably one of the most cohesive exhibitions on view and the individually complex works converse clearly across the walls.  Perhaps prophetic, the exhibition is entitled “We’re Building Something Better Than You” and seems to be tremendously successful as evidenced by the many little red dots alongside the works. 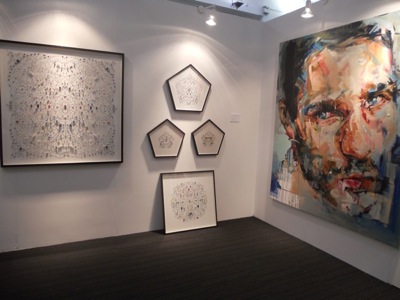 “The Artist, As Viewed from the Outside” features the work of five artists working with the theme of personal memory and the potential fallibility of the perspective.  Italian artists take the forefront of the exhibition, though Canadian Andrew Salgado holds his own.  Leonardo Ulian became an artist after a previous career as an engineer, and this drastic shift is reflected in the intricate collages created with circuitry and computer components.  The works reference Hindu and Buddhist symbolism, and one imagines that the artist would necessarily be in a meditative state in order to complete the precise and precious webs of no longer functional technology.  While most works are two-dimensional (or in the case of Ulian, low relief), Fabio Lattazini Antinori’s creation in collaboration with Alicja Pytlewska stands out for it’s size and three-dimensionality.  “The Four Sisters” is what appears to be a hooded cloak, noted as being shamanistic, composed of shredded bank documents.  Looking at the power of “the big four” (religion, politics, economics, and greater social ills), Antinori destroys official documentation thereby obscuring the memory of the data.  Brother Roberto and Renato Miaz paint portraits.  However, the subjects are completely blurred and obscured, recognized only as portraits by the fuzzy human form.  These paintings evoke the sensation of loss of memory of a person’s features after a long absence or loss – the formerly clear details are reduced to generalities. 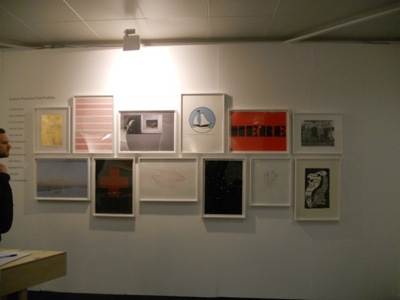 Eastern Pavilions is a unique collaborative project among galleries and museums from the east of England.  Each of the participating organisations commissioned a print from an artist of local significance or relevance to the exhibition programme to be compiled into a print portfolio.  The portfolio contains work by Gareth Bayliss, Adam Bridgland, Coco Crampton, Demián Flores, Ryan Gander, Nigel Henderson, Andy Holden, Frances Kearney, Kate Owens, Elizabeth Price, Colin Self, and Tris Vonna-Michell.  Relying primarily on the use of black, white, and red, the prints form a cohesive collection when displayed together despite the different styles of each artist.  The limited edition print collection and Eastern Pavilions’ talks programme offer an accessible opportunity to collect contemporary art. 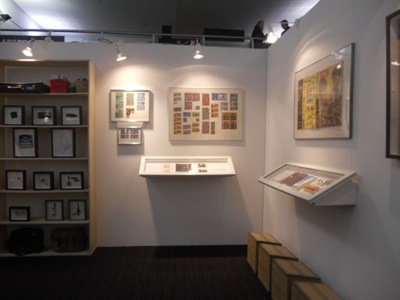 Most galleries opted to exhibit the work of multiple artists to demonstrate the range of their gallery, but Hannah Barry took the road less travelled by emphasizing a single artist, hoping that a strong solo exhibition would generate interest in other gallery artists.  In an arrangement that resembles a cabinet of curiosities, artist Oliver Griffin has created a personal archive, chronicling varied aspects of his life in the past decade with great detail.  From a framed collection of lottery cards to a found collection of holiday photographs on slides, the exhibition draws the visitor in and creates a mental separation between the calm contemplation of seemingly mundane objects and the busyness of the surrounding fair.  Despite the particularity and quiet, there is an underlying sense of frenzy and obsession, perhaps attempting to combat a fear of being forgotten, leaving without making an imprint.

Hannah Barry also represents sculptor James Capper, whose large-scale work stands just outside the Business Design Centre.  In addition to a prestigious display location at the fair, the young artist will soon have a solo exhibition at the Yorkshire Sculpture Park. 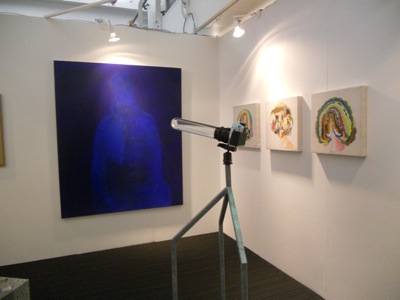 Bringing together the work of Beatrice Haines, HaYoung Kim, Julia Vogl, Nadine Feinson, Nadine Mahoney, and Steven Dickie, the Hoxton Art Gallery is looking at the role of (and dependency on) modern technology.  The works share a mostly skeptical outlook, and aesthetically the works are linked by a saturated colour palette.  For Nadine Mahoney, mixing her own pigments is a fundamental aspect of her practice, and the resulting colours are vibrant and rich, adding depth to her anonymous portraits.

In addition to the primary stand, two artists represented by the gallery are featured elsewhere in the fair.  Julia Vogl was selected to present an interactive piece in one of the public spaces of the Art Projects section.  Called “PREDICTING – The London Winter Weather,” Vogl invites fair visitors to become meterologists and tie a ribbon representing a weather condition for each day of the fair, and this weekend’s snow has led to some varied responses. The project is a cheerful look at dreary London weather and a humorous acknowledgement of the notoriously difficult task of predicting the weather.  Steven Dickie was also selected to participate in the fair’s larger performance programme.  Dickie’s Thursday performance looked at the themes of knowledge and understanding. 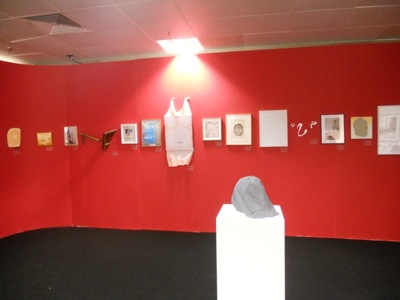 As a comment on the tendency for galleries and individual works to compete for attention at art fairs, Limoncello cleverly uses the guilty pleasure television programme “Take Me Out” as a reference point.  Like the programme, thirty female artists are lined up along the perimeter of the space with a lone male figure, both ominous and anonymous, in the centre.  The disparate works are in a variety of media and depict different subjects, but they stand elbow to elbow confronting the viewer.  While these works vie for our attention, there is an understood transience as each work does what it can to be matched with a buyer and the subsequent replacement by someone else.  Though the works on display vary in quality, viewers can appreciate Limoncello’s tongue-in-cheek and self-referential presentation of a microcosm of an art fair. 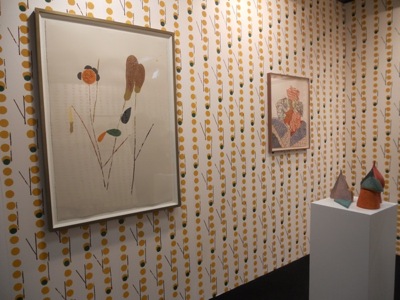 In a sea of stark white walls, the warm and cheerful wallpaper of Poppy Sebire’s stand is a welcome relief.  The solo exhibition of works by Georgie Hopton features collage, painting, sculpture, and the previously mentioned wallpaper.  Relying on a similar colour palette, the works from different stages of the artist’s career fit together seamlessly and inspire a feeling of nostalgia.  Using materials fondly collected such as old gift wrap and wallpapers or vegetables from her personal garden, the works are labours of love and often, as in the vegetable prints, a result of repeated trial and error.  Though most of works are two-dimensional, they exhibit a rich blending of texture using layered paper, yarn, and objects gathered from the garden.  Individually Hopton’s works are nice combinations of nature and artist intervention, but together in this display they are truly lovely, a contemporary Arts and Crafts interior. 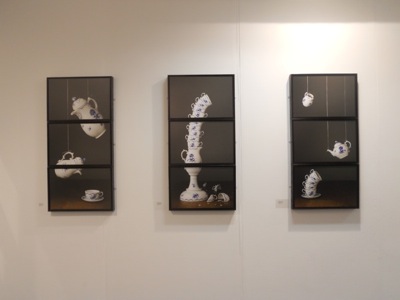 For photography buffs Troika Editions has put together a great display of four artists who attempt to defy documentary conventions and instead construct a reality to capture.  The photographer is not a passive observer but rather an active choreographer.

Lynne Collins is represented by her series known as “The Trespasser.”  In these images, Collins combines images of derelict buildings and opulent still life arrangements.  Calling to mind Dutch vanitas paintings, the contrast of decadence and destruction creates visually stunning images while also questioning contemporary practice of accumulation and neglect.

Looking at the construction not only of photography but also memory, Joachim Froese uses simple objects in intricate and precarious arrangements as the subjects of his work.  The series entitled “Archive” looks at collections of inherited objects as conductors of memory and family lineage.  Books stacked like a game of Jenga and a ceramic tea set arranged as though it belongs at the Mad Hatter’s tea party are vividly captured in sets of three or four vertically arranged prints.  These works, like the memories they embody, end up in fragments carefully pieced together.