Two works on paper by the Secessionist artist Egon Schiele, stolen from a Jewish family by the Nazis in the late 1930s, have been ordered to be restituted to the heirs of an Austrian Holocaust victim. The works of art, ‘Woman Hiding Her Face’ and ‘Woman in a Black Pinafore’ by Schiele, valued at £3.5m, will now be returned to the family of Fritz Grunbaum, who was killed in the Dachau concentration camp in 1941. The Facist Third Reich government confiscated Grunbaum’s 449-piece art collection when he was arrested in 1938. The two disputed drawings wound up in the hands of the London based international art dealer Richard Nagy.

Nagy claimed legal title to the works, which were purchased in good faith. He claimed he had good title to the artworks stemming from Grünbaum’s sister-in-law, Mathilde Lukacs, who in 1956 sold 45 Schiele works to a gallery in Switzerland. The London art dealer exhibited the drawings in 2015 at an art show in New York, where the heirs of the Grunbaum family discovered the lost artworks were being offered for sale. ‘We should give back art looted by the Nazis’ Is this your family’s lost ‘Nazi art’? Mr Nagy said he had bought them legally. But the Manhattan state court ruled against him, citing the 2016 Holocaust Expropriated Art Recovery (Hear) Act. Mr Nagy has been a key dealer in Modern art since 1980. He started the Dover Street Gallery in 1989, and in the autumn of 2010 opened a new space in Old Bond Street, London. The first exhibition, in the new gallery was titled, Egon Schiele. Women. It opened in May 2011 to glowing reviews. Since then, he has staged one museum-quality exhibition a year, which has included The Silverman Collection – a single-owner group of outstanding Austrian and German Expressionist works – and George Grosz, Berlin. Prostitutes, Politicians and Profiteers. 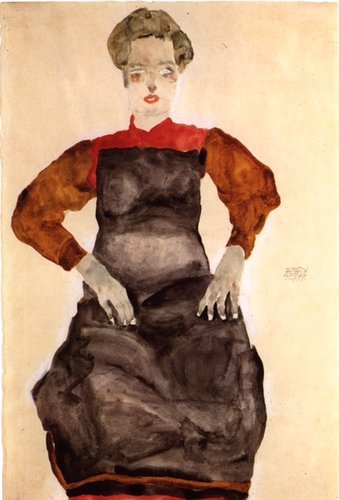 Raymond Dowd, a lawyer for the Grunbaum heirs – Timothy Reif, David Fraenkel and Milos Vavra – argued that the lost works were not discovered by his clients until they noticed they were up for sale at the art fair. After the ruling, Mr Dowd praised the decision for moving “a step closer” to recovering art taken in “the largest mass theft in history”. The recently revised act now extends the statue of limitations for making claims on Nazi-stolen art to six years after its “actual discovery”.

The case follows a failed attempt by Milos Vavra and Mr Dowd in 2005 to win restitution for another Schiele drawing from Grunbaum’s collection. The court in that case ruled in favour of a Boston businessman who owned the work, on the grounds that too much time had passed since the heirs had made their claim.

The restitution of stolen works of art during conflict is being addressed by many nations. Most recently in Syria and Iraq. The Metropolitan Museum in New York announced yesterday that they will return antiquities to both India and Nepal. Two separate agreements have been signed to step up the return of a looted ancient Hindu goddess sculpture, a stele, and a Standing Buddha.

Egon Schiele, the enfant terrible of 20th-century art, was born in June 1890 in the town of Tulln, outside Vienna. His phenomenal skills were employed, with the lack of restraint typical of adolescence, on subjects often left well alone by his predecessors and contemporaries – Eros and Thanatos, worked out with pencil, crayon, gouache and oil. Sex and death invaded his middle-class life at a young age – his syphilitic father went insane and died when Schiele was 14 years old. This major blow to the boy led to his confrontational approach to life and art. This has had popular psychologists analysing his so-called pathology ever since. That he was prosecuted, aged 21, for carnal knowledge (he spent 24 days in jail on remand before being acquitted) has not helped – emphasising his wild-child status for some and confirming his victimhood at the hands of bourgeois society for others.