There was a huge pair of medical looking rubber gloves attached to St John’s Church tower, wafting in the breeze. 20-foot arms drawing you into the Waterloo festival – were you about to be operated on, or cleansed or your thoughts manipulated? – the Mind Transformed was the theme of this year’s festival.

These collaborative exhibitions are bringing exciting new energies to London

The festival was more ambitious than ever expanding from its previous single weekend to several weeks of music, art, talks, workshops and events. Teaming up with the London Group who’s current base, the Cello Factory, is encamped just behind the Church allowed the festival to suck in a huge breath of air and expel a great range of art and ideas into the hazy and humid Waterloo summer.

Asked by the festival to contribute a visual aspect to run alongside the musical offerings – the London Group, which is growing in confidence and energy as it enters its second millennium, called upon its members and expanding group of friends to stage not one, not two but three shows concurrently around the Church, both above and below ground, in the light and in the dark. These collaborative exhibitions are bringing exciting new energies to the group and a growing talent pool of skills across all genres which should see the group well into the future. 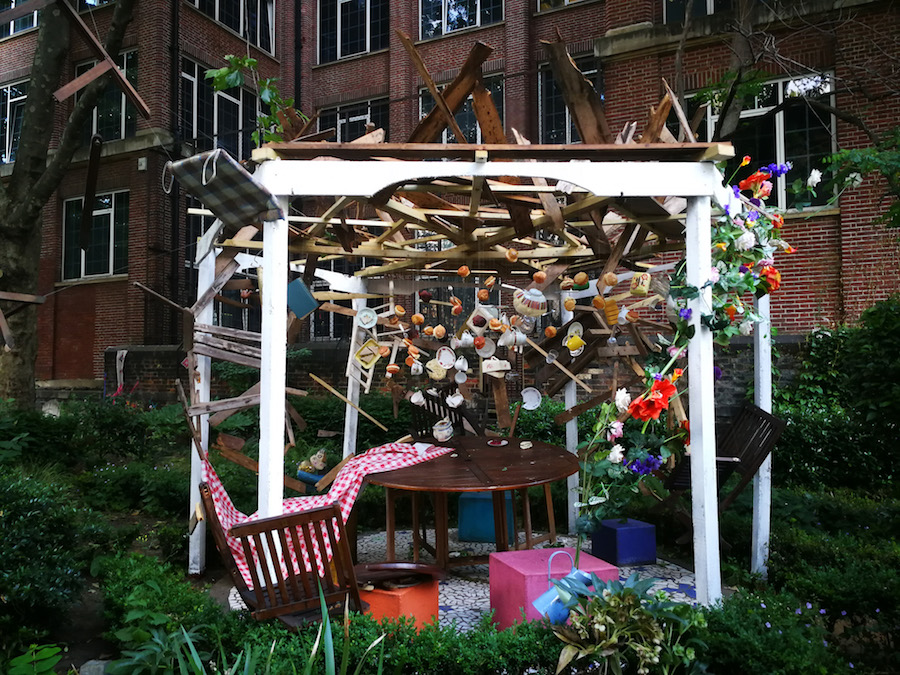 Given the transitory nature of Waterloo and the fact that it has been a place of support for homeless and vulnerable people for many years, the idea of an outdoor show based on the theme of ephemerality seemed a natural and challenging one. Would the works survive the duration of the show outdoors? The show was curated by Susan Haire the President of The London Group.

In the end, some of the works didn’t even survive the night, balloons popped, pieces drifted, crinkled and desiccated, a tent sculpture was transformed into someone’s home and disappeared. But given the rough and tumble area, on the whole, the work did endure and provided a thoughtful back-drop for the busy Waterloo lunchtime crowd and evening dwellers. Given the nature of the show, it was no surprise that many works were politically reflecting the vast changes which appear to be surrounding us. Artworks worked in teams, making parallel statements as simply as possible in great letters around the Church garden HOME (by Peter Avery) and GOING, GOING, GONE (by Graham Tunnadine). Putting a metaphorical bomb under an English Tea Party, Andrea Cavallari’s piece dominated the left side of the Church, the side where the homeless urinate. This calamitous scene would have been extraordinary in any year but is devastating post Brexit. To the right of the Church, the small park area housed multiple artworks and staged several lunch-time concerts. The Immemorial string sculpture by London Group member Martin Heron was so popular that it was left up after the exhibition had finished. The more than two hundred trips up and down the ladder which Martin made to install this work (imagine his knees) resulted in the lightest of touches, ray tracing a notion of hope across the festival. 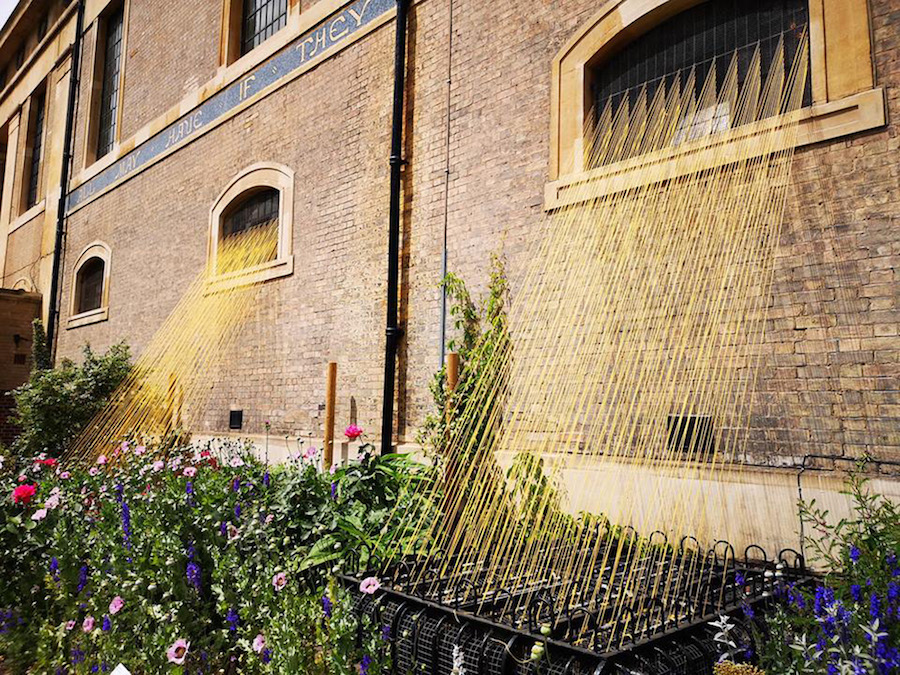 The Church holds a food bank each Wednesday where people with vouchers can fill their bags with as much food as they can carry.
There was plenty of free art food on display too, so it was surprising that the wildlife of the area – I’d guess mainly Pigeons and rats didn’t engage more with the art. The Waterloo Sparrow by Angela Carol Stocker consisted of a 4-foot sculpture made of birdseed. It took the pigeons a week to work out it was edible. Perhaps being shaped like a vast sparrow frightened them off, still once they got going the poor sculpture didn’t stand a chance. Elsewhere apples, dozens of eggs, flowers, and goldfish bowls offered up other treats. It was good to see artists giving away free stuff. As a passing man said as a flock of pigeons munched at the sparrow’s head, “it’s art, and it’s useful”.

The second exhibition with the slightly grandiose title was at the Cello Factory and saw 10 members of the group come together with photographs by recent Open award winner Anita Bryan. Usually, the group’s shows here are crammed out wall to wall, so it was great to see the space open up allowing the artworks to float lightly on the surface. Many pieces had a kind of tentative explorative feel as the artists reached beyond the image into an illusionistic space. Least I think that’s what the show was about. In contrast to all this airiness, and stealing the show, was a bloody substantial black girder constructed by Clive Burton to keep the Cello Factory from collapsing in on itself. Bravo.

The show was curated by London Group member Tom Scase who staged two private views including one for London Group supporters JPES Morgan and also a debate on the question of “is art transformative?” which apparently ended up as a draw. 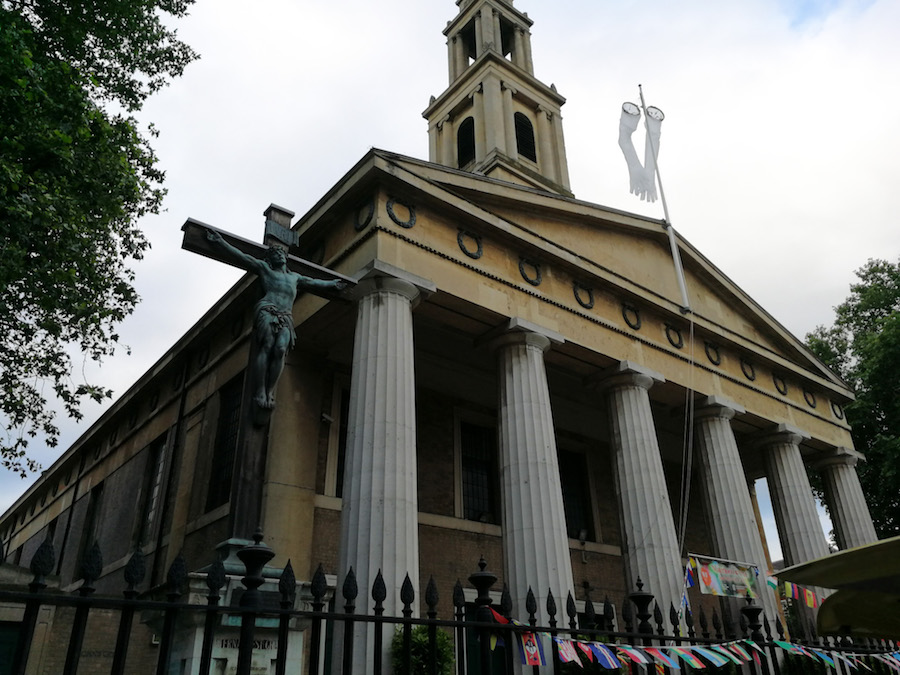 The final show by the London Group variously described as “eyeball cooking”, “like an acid trip without the acid”, and “batshit crazy”, was down in the crypt. A mind opening show inspired by Ken Russel’s 1980 science fiction horror film, with 22 short films immersing the viewers into various spaces, states and emotional baths. Curated by London Group members Nicola Schauerman and David Theobald this show’s open call proved so popular that the show was doubled in size. It’s great to see so much brilliant and varied action in video art and the moving image arena. The booming ambient sound and psychotropic visuals were lapped up by an attentive and buzzy audience on the opening night, and the show was well attended throughout with many people managing to sit through the hour-long show in the fetid atmosphere. I hear they are putting in some ventilation next year which would be nice. And maybe stop the dripping pipes too. Having said that the venue fitted the theme of the show perfectly and was the next best thing to actually being in a floatation chamber.

All the artists have agreed to extend the show’s life, and their videos can be seen on the London Group’s video channel until September. Visit Here

The London Group’s contribution to the festival was much appreciated and offered an excellent chance for the members to really stretch out and challenge themselves. The ‘friends’ bring new audiences and the capacity to recharge and amaze the group. There is already talk of doing the festival again next year.

The range of works on show also included some performances by friends of the group Ann Grim who staged three acts involving the last in utero human beings which she magicked out from her ovular techno-pods. It was fitting that the very last embryo in the form of a small blue egg was handed out to the President of The London Group Susan Haire, who had devoted so much effort to organise the festival in all its components. Susan looked happy to receive this gift. There could not be a more fitting pair of hands for the future gestation of the group. Subsequently Ann Grim blow-torched the stage, walked off and the performance was complete. The audience clapped. The fire was put out. The egg remained safe.

A Gallery of images can be seen on the Waterloo Festival website
www.waterloofestival.com