Just in from Tate. From tomorrow, Tate Modern and Tate Britain will close temporarily in line with government guidance. Tate Liverpool and Tate St Ives will remain open – discover what’s on. Just when we thought it was safe to go back into galleries Tate, soon to be followed by The Royal Academy, National Gallery, and British Museum look set to shut because of Government tier 3 restrictions.

The landmark partnership project spans 1400km of stunning coastline stretching from the East Sussex Downs through to the Thames Estuary, launching at Turner Contemporary on 1 May and running until November.

England’s Creative Coast launches with lead partner Turner Contemporary on 1 May 2021 and then sequentially with each of the partner arts organisations presenting their Waterfronts commission — a series of site-specific artworks curated by Tamsin Dillon — and part of the GeoTour.

England’s Creative Coast crowns an exceptional year for culture along England’s South East coastline. In 2021 Turner Contemporary celebrates its 10th anniversary year; Cement Fields and Metal in partnership lead Estuary 2021, an art, literature, music and film festival celebrating the lives, landscapes and histories of the spectacular Thames Estuary (21 May – 13 June); and later in the year the Folkestone Triennial presents ‘The Plot’, the largest exhibition of newly commissioned work in the UK.

The beautiful and dramatic landscape stretching along the Essex, Kent and East Sussex shorelines has inspired artists for centuries and is home to some of the UK’s most distinctive and visionary galleries and art events, attracting visitors from far and wide. With so much creative commissioning in the public realm next year their cultural contributions are especially valuable, giving visitors the chance to see some of the UK’s best new art works safely in the outdoors.

Sarah Dance, Project Director of England’s Creative Coast comments: ‘Conceived as a project outside of gallery walls, England’s Creative Coast offers a naturally socially-distanced experience that connects people and places across the extraordinary network of arts organisations along the South East coast. We hope that in these troubled times these site-specific art commissions and geocache trail brimming with seaside tales inspire creativity through adventure.’

Cement Fields presents Jasleen Kaur: ‘The first thing I did was to kiss the ground’

Gravesend, 22 May (launching with Estuary Festival 2021)

Southend-on-Sea, 22 May (launching with Estuary Festival 2021)

Towner Eastbourne presents Mariana Castillo Deball: ‘Walking through the town I followed a pattern on the pavement that became the magnified silhouette of a woman’s profile’

Folkestone, 29 May (launch date tbc; and featured in the 2021 Folkestone Triennial) 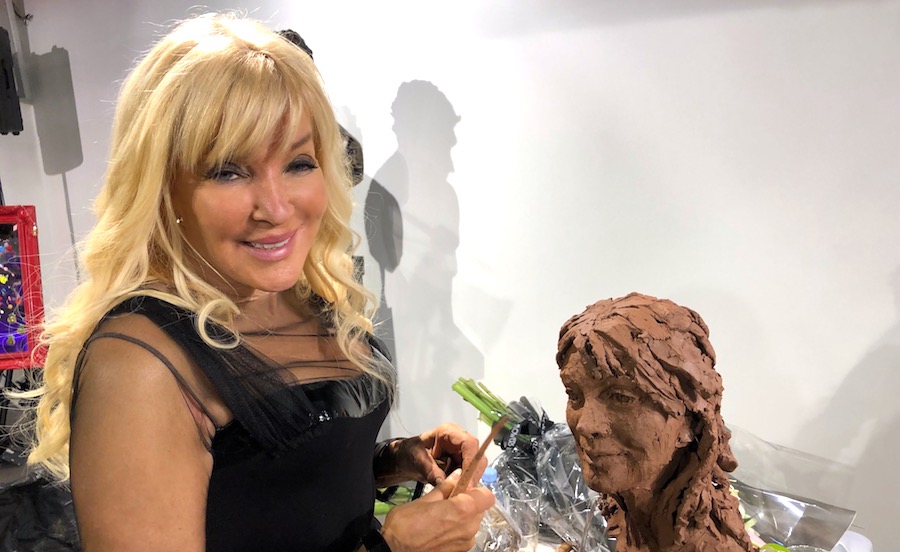 The critically acclaimed classical music trio, the Korros Ensemble, whose work in the music industry has been largely decimated by COVID-19 will broadcast an online Christmas Concert and prize draw in aid of Barnardo’s children’s charity this month via TicketCo TV. The Royal Sculptor Frances Segelman has donated an artwork in honour of the event.

The musicians have experienced a year like no other as restrictions imposed by the UK Government severely impacted their work and way of life. But they have turned the challenging era for the performing arts sector into a positive.

The ensemble will present an hour-long festive concert from a renovated old chapel in West Berkshire that has been appropriately adorned in atmospheric yuletide decorations suitable for a unique stay-at-home classical music experience. The concert will be pre-recorded and available on-demand online from 7 pm on Thursday, December 17.

Comprising the beautiful and unusual combination of flute – Eliza Marshall, clarinet – Nick Ellis and harp – Camilla Pay, the Korros Ensemble has been wowing audiences since its formation in 2001 during the musicians’ studies at the Royal Academy of Music. In recent years, the group has collaborated with Ballet Rambert and Pineapple Dance Studios and individually performed with major artists such as Elton John, Beyoncé, and Andrea Bocelli.

Clarinettist, Nick Ellis said, “Like so many others, 2020 has presented a whirlwind of emotions, and it has been great to focus on a positive venture. We are thrilled to present this year’s nut-cracking Christmas Concert in aid of Barnardo’s.”

The ensemble’s flautist Eliza Marshall, who also has the flute chair in Disney’s West End Hit ‘The Lion King’ said, “We’re not the type to sit and watch the world go by, so when the opportunity came around to host an event at a time where live music events are so few, and far between, we simply could not refuse.”

Harpist, Camilla Pay said, “Korros Ensemble’s passion and love for music will easily translate into the homes of our viewers, and we look forward to welcoming as many people as possible to our on-demand virtual event. It’s our first time using TicketCo TV’s multi-purpose broadcasting platform, and we have been impressed by the company’s modern approach to broadcasting and selling tickets which makes our job of delivering a memorable show much easier.”

Joe Edwards, global key account manager at TicketCo, said: “It is great to partner with such an innovative group who are using modern technology in such a refreshing way to help Barnardo’s. We are looking forward to working with the team to deliver a successful online concert via video-on-demand.” Barnardo’s supports hundreds of thousands of children, young people, parents and carers through its services across the UK.

“As we enter a challenging winter season, many more families are falling into poverty and the pandemic is wreaking havoc on children’s mental health and increasing their risk of harm at home, online, and in the community.

“All this means too many children and young people will be deprived of the chance to enjoy the festive season. With the help of this prize draw held by the Korros Ensemble, we can raise vital funds to support vulnerable children through this crisis and beyond.”