Pirelli Hangar Bicocca in Milan this autumn will stage a major exhibition of Lucio Fontana’s celebrated ‘environments’. The exhibition will be displayed in a setting where the visitors will be able to walk through several of the works. They will feature different forms and colours which unfold through rooms, corridors, glass walls and labyrinthine paths. The show, opening on 20 September 2017, has been developed in collaboration with Fondazione Lucio Fontana.

Fontana dedicated his entire career to investigating the concepts of space

Despite the innovation of the artist’s environments, this area of Fontana’s work is not widely known. It is only in recent years that scholars have started extensive research into this aspect of his practice and the show at Pirelli HangarBicocca will be a unique opportunity to see ten environments reconstructed in full scale and presented together for the very first time. The exhibition has been developed as the result of research into so far unknown historical documents such as personal letters, architectural plans, photographs, magazine reviews, films and interviews with art historians and Fontana’s collaborators. All the traced material has been reviewed and approved by the Fondazione Lucio Fontana
Among the exhibited works, the show will include reconstructions of key environments conceived for museums, such as the Walker Art Center in Minneapolis in 1966 and the Stedelijk Museum in Amsterdam in 1967, and never exhibited since then.
The exhibition is curated by art historian Marina Pugliese, Adjunct Professor at the California College of the Arts in San Francisco and former Director of the Museum of 20th Century Art in Milan, conservator Barbara Ferriani, lecturer at the Centro di Conservazione e Restauro “La Venaria Reale” and at the University of Milan, and Vicente Todolí, Artistic Director of Pirelli HangarBicocca and previously Director of Tate Modern in London from 2003-10. 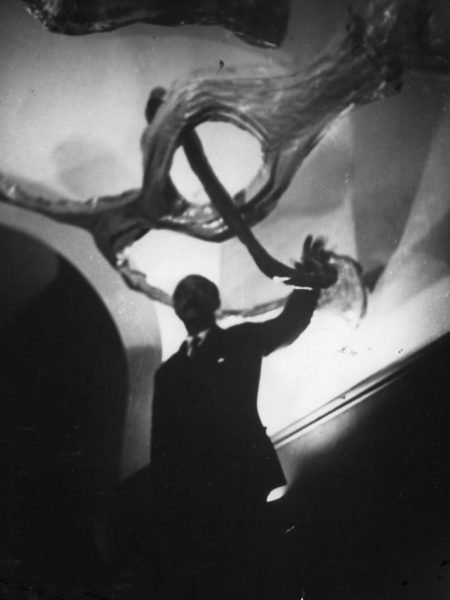 Lucio Fontana (1899 – 1968) is internationally recognised as one of the most innovative artists of the 20th century. His legendary works have been shown in museums all over the world and they are represented in many international collections, both public and private, including the Guggenheim and MoMA in New York, Tate Modern in London and Centre Pompidou in Paris.

Fontana dedicated his entire career to investigating the concepts of space, light, the void and the cosmos. He extended the boundaries of art through an awareness of new technology, such as neon and UV light, and new media such as television. In order to introduce these avant-garde concepts, Fontana wrote several manifestos in which he defined his artistic research in terms of spatial movement, known in Italian as Spazialismo, which he founded in Italy in 1947. Trained as a sculptor, he introduced the third dimension to his canvases first by puncturing them with holes in 1949 and then, from 1958, but performing his most famous gesture: the Cut.

From 1949 on, Fontana further developed his research into spatial ideas and the third dimension through works conceived inside existing architecture and by collaborating with the most important Italian architects such as BBPR, Figini, Pollini, Zanuso and Carlo Scarpa. The artist would call these innovative and groundbreaking artworks “Ambienti spaziali” (Spatial Environments). The very first of this new type of work was Ambiente spaziale a luce nera (Spatial Environment in Black Light) in 1949, in which a series of swaying phosphorescent elements hang from the ceiling in a completely black exhibition space.

Fontana’s second environment Struttura al neon per la IX Triennale di Milano (1951) is an elaborate, looping neon sculpture originally designed for the ceiling of the Triennale di Milano. In subsequent Ambienti spaziali made between 1961 and 1968, Fontana continues to experiment with empty rooms and light as a medium to generate space, introducing the use of innovative materials and techniques—such as neon, light, fluorescent paint, acrylic mirrors, rubber floors, and metallic wallpapers—while also experimenting with forms of instability, testing the spectator’s sense of balance and perception, thus anticipating the revolutionary Space and Light research of the 1970s in the US.

Pirelli HangarBicocca is a non-profit foundation, established in 2004, which has converted a former industrial plant in Milan into an institution for producing and promoting contemporary art. This dynamic centre for experimentation and discovery covers 15,000 square metres, making it one of the largest contiguous exhibition spaces in Europe. It presents major solo shows every year by Italian and international artists, with each project conceived to work in close relation to the architecture of the complex. Admission to the space and the shows is completely free of charge, and facilitators are on hand to help the general public connect with the art. Since 2013, Vicente Todolí has been the Foundation’s Artistic Director. The complex, which once housed a locomotive factory, includes an area for educational activities, and three exhibition spaces.