He was announced as the 2018 winner of the prestigious £30,000 prize by BBC Front Row broadcaster and journalist, John Wilson, at a special award ceremony at The Photographers’ Gallery. The four nominated projects from the 2018 shortlisted artists: Mathieu Asselin, Rafal Milach, Batia Suter and Luke Willis Thompson will go on display at a special exhibition at The Photographers’ Gallery until 3 June 2018.

Thompson’s 35mm film autoportrait is a portrayal of Diamond Reynolds. In July 2016, Reynolds used Facebook Live to broadcast the moments immediately after the fatal shooting of her partner Philando Castile by a police officer during a traffic-stop in Minnesota, United States. Reynolds’ video circulated widely online and amassed over six million views. In November 2016, Thompson contacted Reynolds to invite her to collaborate on a project which would act as a ‘sister-image’ to her video broadcast, and break with her more publically consumed image.

Silent apart from the whirr of a 35mm projector, the intensely focused installation presented at The Photographers’ Gallery comprises barely more than a single shot of Diamond in private mediation. Seemingly unaware of the camera – and by definition the audience – this is a startling presentation of a personal and autonomous moment.

The winner was selected by the members of the 2018 Deutsche Börse Photography Foundation Prize jury, who included: 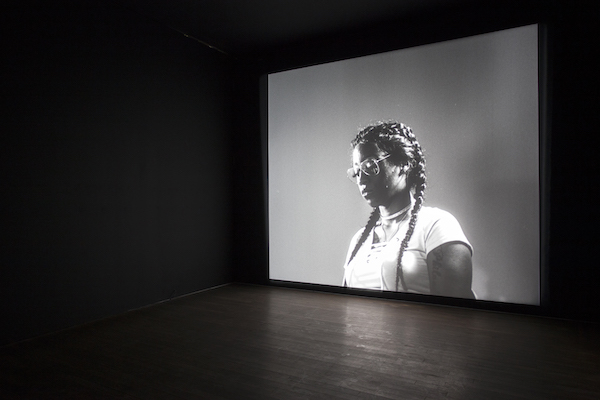 Brett Rogers, Director, The Photographers’ Gallery and Chair of Jury, said: “The judging session to decide the 2018 winner encompassed lengthy and complex discussions around the role and form of photography today, its almost unrivalled power as a social, political and creative force, and its unique ability to bring to public focus some of the most urgent and relevant issues of today.

Within that context, the panel decided to award the 2018 prize to Luke. His singular and uncompromising portrait, made in collaboration with its subject, Diamond Reynolds, was conceived as a way to return agency to the protagonist.

As a contender for a prize focused on photography, the jury felt autoportrait imbued the moving image format with the singular and almost obsessional quality of a still photograph, drawing attention to its materiality, and challenging viewers to consider the personal stakes of representation in an environment at once intimate and collective.

Ultimately though, the project was felt to invite a timely and prescient conversation around the nature of image control, authorship and distribution in a way that expands rather than shuts down the debate.”

Anne-Marie Beckmann, Director, Deutsche Börse Photography Foundation Prize, said: “We congratulate the winner of the Deutsche Börse Photography Foundation prize 2018, Luke Willis Thompson. His silent filmic study autoportrait is a significant contribution to contemporary photography, reflecting on the most relevant issue of self-representation and the ownership of image in today’s complex media world. We are excited to present the works of all four finalists soon at Frankfurt’s MMK Museum für Moderne Kunst as part of the photo triennial RAY 2018.”

Luke Willis Thompson (b. 1988, New Zealand) attended the Elam School of Fine Arts University in Auckland and the Städelschule in Frankfurt am Main. His works have been included in exhibitions such as the São Paulo Biennale; the Montréal Biennale; the Asia Pacific Triennial, Queensland; and the New Museum Triennial, New York. Thompson was awarded the 2014 Walters’ Prize and has been nominated for the Turner Prize in 2018.

The Deutsche Börse Photography Foundation Prize 2018 included works by artists Mathieu Asselin, Rafal Milach, Batia Suter and Luke Willis Thompson, all of which will remain on display at The Photographers’ Gallery until 3 June 2018. The show will then tour to the MMK Museum für Moderne Kunst in Frankfurt as part of the photo triennial RAY 2018 from 22 June until 9 September 2018.

The 2018 shortlist has been heralded for reflecting on the production and manipulation of knowledge and systems of representation through visual formats. Collectively and individually, the four projects drive forward an artistic enquiry into the mechanics of visibility and concealment and interrogate the status and position of the image in contemporary culture.

The annual award was established by The Photographers’ Gallery, London, in 1997 and has been in partnership with the Deutsche Börse Group since 2005. Since 2016 it has been awarded together with the Deutsche Börse Photography Foundation, a non-profit organisation specifically focused on the collecting, exhibiting and promoting of contemporary photography. The £30,000 prize rewards a living photographer, of any nationality, for a specific body of work in an exhibition or publication format in Europe, which is felt to have significantly contributed to the medium of photography between 1 October 2016 and 30 September 2017.