The temporary removal by the Manchester Art Gallery of a popular painting, Hylas and the Nymphs by JW Waterhouse is part of a project with the Conceptual artist Sonia Boyce, who has a solo exhibition opening at the gallery on 23 March 2018. The move has caused so much controversy that It has now been decided that the painting will go back on display Saturday 3 February.

Manchester Art Gallery said it took down Hylas and the Nymphs by JW Waterhouse to “encourage debate” about how such images should be displayed. But critics accused curators of being puritanical and politically correct.

The temporary removal of the painting is not about censorship – MAG

The painting was one of several similar pictures in a gallery area titled In Pursuit of Beauty, described as “very old-fashioned” because it depicts women as “either as beautiful passive objects or femmes fatales”. The decision was influenced by recent movements against the objectification and exploitation of women such as the #metoo campaign.

Sonia’s artwork is all about bringing people together in different situations to see what happens. On Friday 26 January an event took place at Manchester Art Gallery where gallery users and performance artists ‘took over’ some of the gallery spaces. The taking down of the painting was one part of this event, which was filmed and will form the basis of new artwork for Sonia’s exhibition.

Exhibitions and displays are always being changed but the particular part of the gallery which includes Hylas and the Nymphs has been the same since 2002. With Sonia, the gallery has been talking about interpreting this gallery in a more contemporary way, acknowledging that Victorian painting is a major part of the collection, but it also exists in a contemporary world full of complex issues around gender, race and representation. 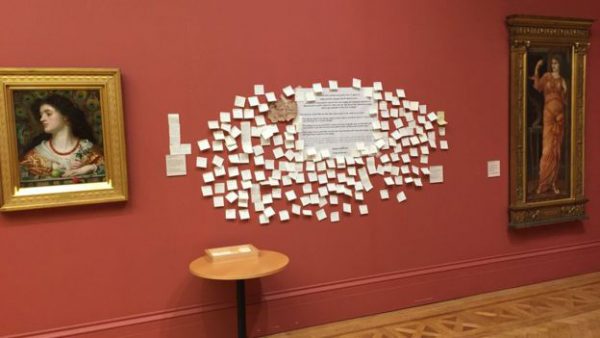 Hylas and the Nymphs by Waterhouse

Instead of making these decisions and discussions closed and hidden from view, the gallery is making a continuing process of conversation, as well as online. Manchester Art Gallery is in the process of organising some public events to continue this process.

The temporary removal of the painting is not about censorship; rather it is about opening up space for debate and discussion about the gallery collection and questions of representation. The painting has been temporarily replaced with the following text:

“We have left a temporary space here in place of Hylas and the Nymphs by JW Waterhouse to prompt conversation about how we display and interpret artworks in Manchester’s public collection. How can MAG talk about the collection in ways which are relevant in the 21st century?”

Here are some of the ideas they have been talking about so far:

This gallery presents the female body as either a ‘passive decorative form’ or a ‘femme fatale’. Let’s challenge this Victorian fantasy!

The gallery exists in a world full of intertwined issues of gender, race, sexuality and class which affect us all. How could artworks speak in more contemporary, relevant ways?

What other stories could these artworks and their characters tell? What other themes would be interesting to explore in the gallery?

The act of taking down this painting was part of a group gallery takeover that took place during the evening of 26 January 2018. People from the gallery team and people associated with the gallery took part. The takeover was filmed and is part of an exhibition by Sonia Boyce, 23 March to 2 September 2018.