Manifesta 12 have unveiled the theme for the next event taking place 16 June 2018 until 4 November 2018. Titled “The Planetary Garden. Cultivating Coexistence”, the concept explores coexistence in a world moved by invisible networks, transnational private interests, algorithmic intelligence and ever-increasing inequalities through the unique lens of Palermo – a crossroads of three continents in the heart of the Mediterranean.

Closely collaborating with Palermitan partners, Manifesta 12 will co-inhabit Palermo as a laboratory to investigate the challenges of our time and look for traces of possible futures. Throughout history, the City of Palermo has been a laboratory for diversity and cross-pollination, shaped by continuous migration. In the 1875 painting by Francesco Lojacono, View of Palermo (in the collection of the GAM Museum in Palermo), nothing was indigenous. Olive trees came from Asia, aspen from the Middle East and eucalyptus from Australia. Citrus trees – the symbol of Sicily – were introduced under Arab sovereign. 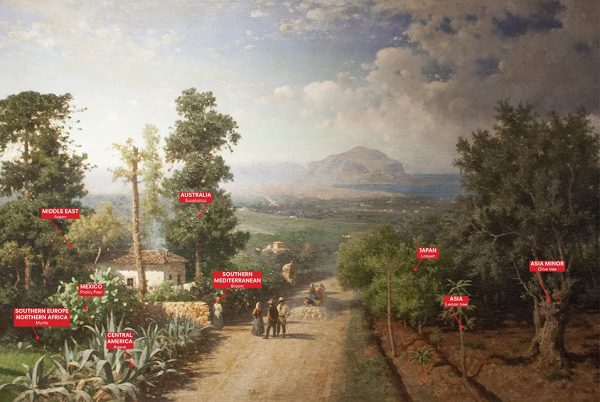 The botanical garden of Palermo, Orto Botanico, was founded in 1789 as a laboratory to nurture, test, mix and gather diverse species. Inspired by Palermo’s Orto Botanico, Manifesta 12 will look at the idea of the “garden”, exploring its capacity to aggregate difference and to compose life out of movement and migration.

Gardens are places where diverse forms of life mix and adapt to co-exist. They allow for cross-pollination based on the encounter. In 1997, French Botanist Gilles Clément described the world as a “planetary garden” with humanity in charge of being its gardener. Twenty years later, Manifesta 12 will revisit the metaphor of the “garden”, not as a space for humans to take control, but rather as a site where “gardeners” recognise their dependency on other species, and respond to climate, time, or an array of social factors, in a shared responsibility.

“The Planetary Garden. Cultivating Coexistence” will host four main sections, each touching on key topics of the concept: Garden of Flows, Out of Control Room, City on Stage and Teatro Garibaldi as the main centre of Manifesta 12 (currently hosting a pre-biennial programme “Aspettando Manifesta 12” – Waiting for Manifesta 12).

Palermo Atlas by OMA (Office for Metropolitan Architecture)  The Manifesta 12 concept was extracted from the city itself through a preliminary phase of investigation by OMA, Palermo Atlas. It was the first time that Manifesta had kicked- off the biennial with research by an architecture office. The goal was to have a deeper understanding of social, cultural and geographical textures of the city; highlight its existing opportunities, and provide a source for audiences to understand contemporary transformations through “the eyes” of Palermo.
Manifesta is the European Nomadic Biennial, held in a different host city every two years. It is a major international art event, attracting visitors from all over the world. Manifesta is the go-to place for discovering emerging artists, thought-provoking ideas, new artworks specially commissioned for the event, and creative experiences in dialogue with spectacular locations of each host city.

Manifesta was founded in Amsterdam in the late 1990s as a European biennial of contemporary art striving to enhance artistic and cultural exchanges after the end of Cold War. In the next decade, Manifesta will focus on evolving from an art exhibition into an interdisciplinary platform for social change, introducing holistic urban research and legacy-oriented programming as the core of its model.

Manifesta is still run by its founder, Dutch historian Hedwig Fijen, and managed by a permanent team of international specialists. Each new edition is started up and fundraised individually. Currently, Manifesta is working from its offices in Amsterdam and Palermo, with an upcoming office in Marseille for Manifesta 13 opening in the French city in 2020.