The performance artist Marina Abramović had a framed painting smashed over her head as she left the private view of her latest exhibition in Florence Italy. The work on paper depicted a portrait of the well-known Serbian artist.

Why this hatred against me? What’s the reason? Why this violence?” – Marina Abramović

A 51-year-old Czech artist living in Florence was arrested at the scene but later released as the artist decided not to prosecute. He said, ‘I had to do it for my art.’  Following the attack and in shock, “The first thing I asked for was: I want to talk to him, I want to know why he did it. Why does he hate me?” When Abramović confronted the man, who she says she had never met before, he told her “I had to do it for my art“For me, it is difficult to understand and process violence,” Abramović says. “Violence against others doesn’t make art. I was also a young artist who was not famous, but I have never hurt anyone. In my work I stage different situations and put my life at risk. But this is my decision and I set the conditions.” 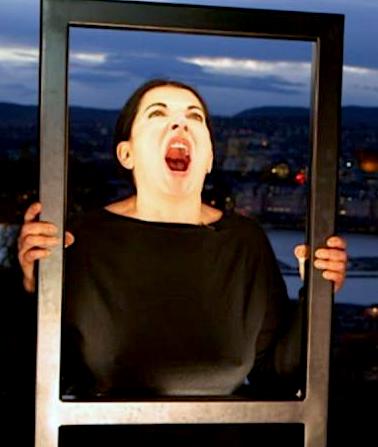 The Italian city’s mayor, Dario Nardella, tweeted that Abramović’s assailant was “not new to this type of gesture.” Authorities have not yet named the man in question.

The gallery’s director Arturo Galansino posted on Instagram that Abramović was unharmed by the assault, posting a selfie with the artist. “We’re fine! Everything is fine!” read the photo’s caption. “Marina Abramović is fine and has not suffered any physical damage. After checking with the police, she left Palazzo Strozzi with serenity. Immediately after the incident, she wanted to meet the aggressor for a direct-confrontation on the reasons for this action.”Speaking with the local edition of the Italian newspaper, La Repubblica, Abramović said that she initially thought the man was approaching her with the painting as a present. That was before his expression suddenly changed, and he became very violent. Abramović recalls that she was suddenly trapped inside the portrait’s frame while guards apprehended her assailant and she was whisked away from the scene by the Palazzo’s director.

“Why this hatred against me?” Abramović asked. “What’s the reason? Why this violence? I had not done anything. I had never met him before.