Marisa Merz (born 1931, Turin, Italy) the only woman artist closely associated with the Arte Povera movement has died age 93. Her 2013 exhibition which inaugurated the Serpentine Sackler Gallery in London was highly regarded. It included a selection of sculptures, paintings and installations from across her remarkable fifty-year career. The show was the artist’s first after winning the Golden Lion for Lifetime Achievement at the 2013 Venice Biennale.

Merz’s work consistently played with scale and materials, ranging from the domestic to the industrial

Her series of Living Sculptures, suspended clusters of forms made up of swirling shards of aluminium, are at once industrial and ethereal highlighting the materials that Merz continually explored. Throughout the late 1960s, Merzer first was actively involved with the Turin-based Arte Povera movement. She often worked with textiles, linking material of typically feminine creativity with Arte Povera’s call to embrace ‘poor’, which could be used in art. She continued to demonstrate a sense of openness concerning materials and processes, as evinced by her application of craft techniques, such as weaving and knitting, embracing non-traditional materials, including nylon, copper and iron, continuing to inspire so many young artists. 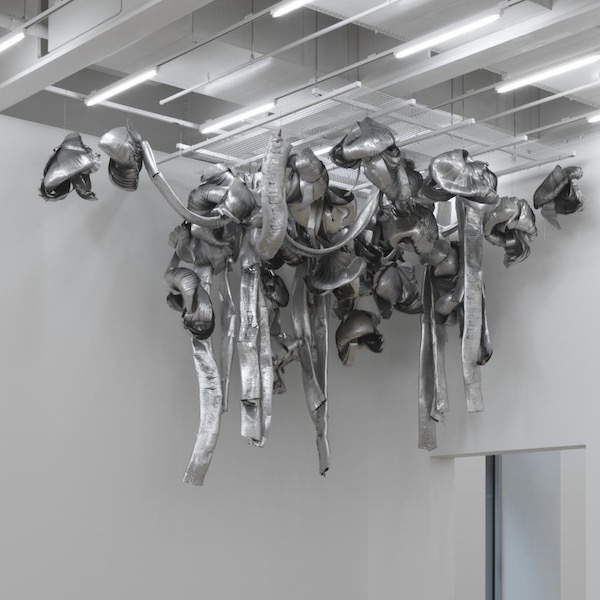 Since the 1970s Merz explored and expanded upon the threshold between abstraction and figuration in her mixed media works on paper, expressionistic clay heads and larger sculptural installations.

In the 1950s, she met Mario Merz while she was a student in Turin. They married in 1960 and had one daughter, Beatrice Merz. In 2005, Beatrice Merz opened a contemporary art centre in Turin, the Fondazione Merz.

As a young artist, Merz did not receive widespread recognition, despite her vast contribution to the scene. Later on, the growth of feminism brought her more significant consideration. Marisa Merz’s art has been described as lyrical, subtle, visionary and private. Her installations feature the idea of the home as an intimate place, secluded and feminine. An example is her 1966 installation Untitled (Living Sculpture), which was intended both for her home and to be presented in a gallery (she once said ‘There has never been any division between my life and my work’). The installation consisted of thin strips of aluminium, clipped and suspended from the ceiling, forming coils and spirals. Tate Modern acquired the work in 2009.

Merz participated five times in the Venice Biennale. Her work has been the subject of numerous solo exhibitions internationally, including shows at the Kunstmuseum Winterthur (2003), the Galleria d’Arte Moderna Bologna (1998), the Stedelijk Museum Amsterdam (1996) and the Centre Pompidou (1994).