Hölle der Vögel (Birds’ Hell) continues the Germanic tradition of using gruesome allegorical scenes at the same time as taking aspects of Classicism and mythology to turn reality into a timeless evocation of human suffering. In this sense, the painting transcends the time and political situation in which it was created to become a universal symbol of humanity like Pablo Picasso’s Guernica of the same period. Begun in Amsterdam in 1937 and completed in Paris at the end of 1938, this work ranks amongst the clearest and most important anti-Nazi statements that the artist ever made, mirroring the escalating violence, oppression, and terror of the National Socialist regime.

Adrien Meyer, International Director of Impressionist & Modern Art, Christie’s New York: “The sale of such a historically significant painting as Beckmann’s Birds’ Hell demonstrates Christie’s ability to lead with masterpieces that resonate on the international market. This emblematic picture has become unanimously recognised as the Guernica of Expressionism and the international appetite was evidenced in the spirited bidding witnessed in the saleroom and on the phone.” 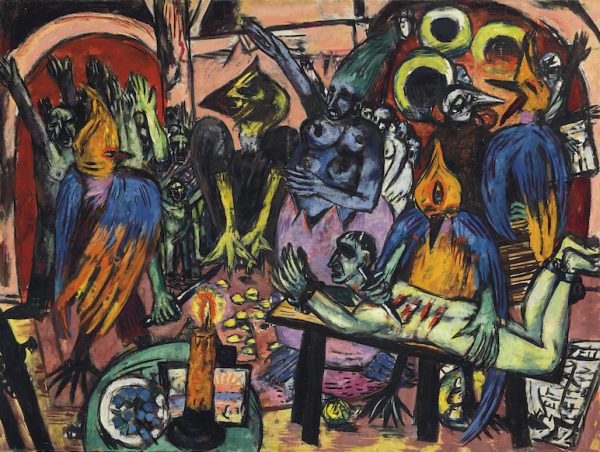 Painted with vigorous, almost gestural brushstrokes and bold, garish colours, Bird’s Hell envelops the viewer in a sinister underworld in which monstrous bird-like creatures are engaged in an evil ritual of torture. Presiding over the scene is a multi-breasted bird who emerges from a pink egg in the centre of the composition. To her right, a crouching black and yellow bird loom over golden coins spread before him, while behind the central figure, a group of naked women stands huddled together. Heightening the sense of hysteria is the group of figures standing within a glowing, blood red doorway to the left of the composition. Guarded by another knife-wielding bird, they return the bird woman’s gesture, their right arms raised in unison in the same furious salute. At the front of the scene, a naked man – the symbol of innocence within this reign of terror – is shackled to a table, held down by another bird that is slashing his back in careful, horizontal lines.

Hitler became German Chancellor in 1933 and Beckmann almost immediately lost his job at the Art School in Frankfurt. In 1937, the Degenerate Art exhibition took place in Munich. ‘It was hung in a very haphazard way,’ Lloyd says, ‘with lots of slogans calling [the artists] “cultural Bolsheviks”, or [describing the works] as “the art of the insane”.’ Hitler gave a speech in which he threatened artists who created such works with imprisonment or castration. Beckmann listened to this speech, and within a few hours he was on a train to Amsterdam. He never set foot in Germany again.