Several hundred fundamentalist Christians have staged a protest outside the Haifa Museum of Art in Israel demanding the removal of ‘McJesus’ a sculpture of a crucified Ronald McDonald by Finnish artist Jani Leinonen.

“When I heard that that there have been violent demonstrations around it, I immediately sent the curator a request to remove it” – JL

My first thought concerning the sculpture by Mr Leinonen was that I’d, in fact, seen it before. It is nearly identical to a sculpture by the Chapman Brothers. (see top photo) This unoriginal artwork is just inflammatory isolated from the context of what the Chapmans had intended. 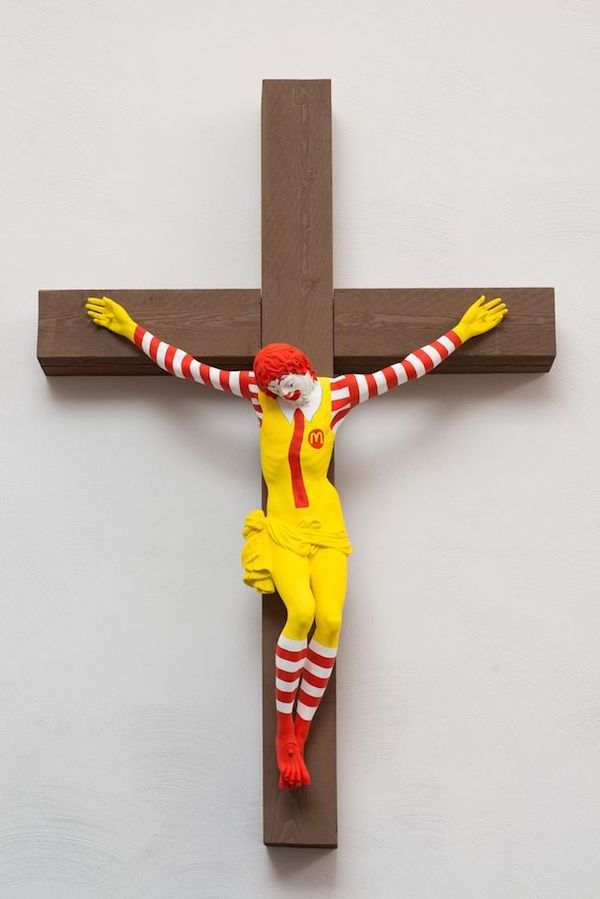 As it turns out, Mr Leinonen had previously asked curator Shaked Shamir to remove McJesus because he had joined the Boycott, Divestment and Sanctions movement against Israel. This highly contentious group intends to isolate the country via boycotts. The curator replied that she was sorry about the decision and that the artist’s message had been forwarded to the management and it was assumed that the artwork had been taken out.

“When I heard that it is still in the exhibition and that there have been violent demonstrations around it, I immediately sent the curator another request to remove it. I have not heard anything back from the museum. I insist my work be taken out of the exhibition instantly.” the artist stated.

Hundreds of Christians were seen protesting outside the Museum of Art on Friday, and a molotov cocktail was thrown at the museum. Clashes broke out between Christian protesters who tried to storm their way into the museum and the police the day before.

Christian leaders in Israel have condemned the work. “We denounce the exhibition and the injury to the holiest symbol of Christianity by an institution that is supposed to serve citizens of all religions,” Reverend Archimandrite Agapious Abu Sa’ada of the Greek Melkite Catholic Archeparchy of Akko told Haaretz newspaper. The pastor of Saint Elijah Cathedral in Haifa added that “what is suitable for Europe and the Christian population of Finland is not suitable for our community and cannot be met with understanding.”

Jani Leinonen (b. 1978 lives and works in Helsinki) plays with the systems of commodity exchange and celebrity, and the marketing strategies through which they operate. Leinonen attacks symbols and marketing strategies, turning them into objects of ridicule, clichéing our agreed marketing society and economic every day. With these strikes, Leinonen unfolds the chain reaction we all are voluntarily involved in and plays up the iconographies of the global brand land. Leinonen’s installations are shops, bars, slot machines but also every day painting exhibitions. What is displayed, though, are not goods but an artistic allegorisation that appropriates these marketing strategies only in order to unhinge their underlying assumptions about value and appropriateness. Leinonen graduated from Academy of Fine Arts in Helsinki in 2002. His works have been exhibited widely internationally, i.e at the Nordic Pavillion at the 53rd Venice Biennial, Galerie Gmurzynska, Wilhem Hack Museum Ludwgshafen and Frankfurter Kunstverein.
Leinonen’s new works are once again thought-provoking and timely. If these are our heroes who needs enemies questions why certain heroic statues still stand in the centers of the European capitals, and why so many do not know – or if they know – subvert – the unspeakable atrocities of some of these historical figures?

Leinonen’s McJesus draws attention to the collective loss of memory that those heroic descriptions maintain: they wipe out the shocking acts of the rulers of history and replace them with sacrificial heroism, romantic adventures, and noble generosity. The exhibition speaks of unobtrusive but effective ways of building and maintaining social power – also through art.