The latest artist to exhibit a work for the “Fourth Plinth’ commission is the US artist Michael Rakowitz’. ‘The Invisible Enemy Should Not Exist’ is a sculpture entirely executed from empty date tins and depicts an ancient Babylonian ‘Winged God’. The work was unveiled on the Fourth Plinth in London’s Trafalgar Square today, Thursday 28 March, by the Mayor of London Sadiq Khan.

I see this work as a ghost of the original, and as a placeholder for those human lives that cannot be reconstructed – Michael Rakowitz

The Invisible Enemy Should Not Exist is a project that Rakowitz started in 2006. It attempts to recreate more than 7,000 objects looted from the Iraq Museum in 2003 or destroyed at archaeological sites across the country in the aftermath of the war. For the Fourth Plinth Rakowitz has recreated the Lamassu, a winged bull and protective deity that stood at the entrance to Nergal Gate of Nineveh (near modern-day Mosul) from c 700 B.C, until it was destroyed by ISIS in 2015. It will be the 12th work to appear on the Fourth Plinth since the commissioning programme began in 1998 and will be on the plinth until March 2020.

The reconstructions of The Invisible Enemy are made from recycled food packaging, similar to the reliefs at the base of Nelson’s Column being made from canons salvaged from the wreck of HMS Royal George. The Lamassu is made of 10,500 empty Iraqi date syrup cans, representative of a once-renowned industry decimated by the Iraq Wars. 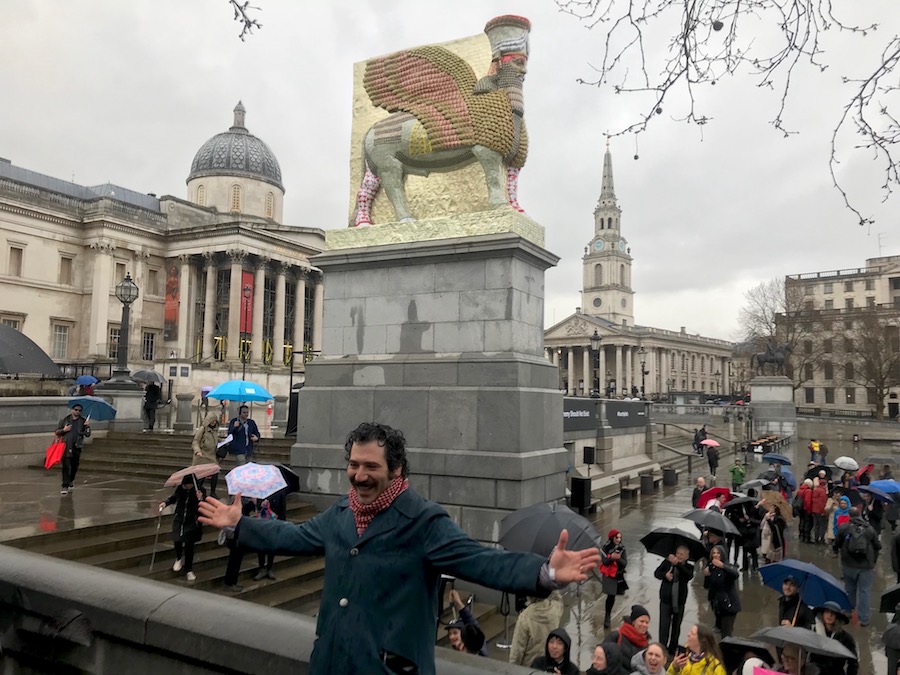 Artist Michael Rakowitz said: “This work is unveiled in Trafalgar Square at a time when we are witnessing a massive migration of people fleeing Iraq and Syria. I see this work as a ghost of the original, and as a placeholder for those human lives that cannot be reconstructed, that is still searching for sanctuary.”

Sadiq Khan said: “This is the world’s most famous public art platform. Michael’s work shows the power of art to bring to life politics, cultures and personal stories from around the world and across generations.”

Chair of the Fourth Plinth Commissioning Group, Ekow Eshun said: “Michael has created a powerful, timely artwork that reaches back through history to offer pertinent commentary on the world today. I’m sure it will become a new landmark for London. Michael was chosen from the most international shortlist for the Fourth Plinth to date, demonstrating our commitment to bringing the work of leading national and international artists to London.” 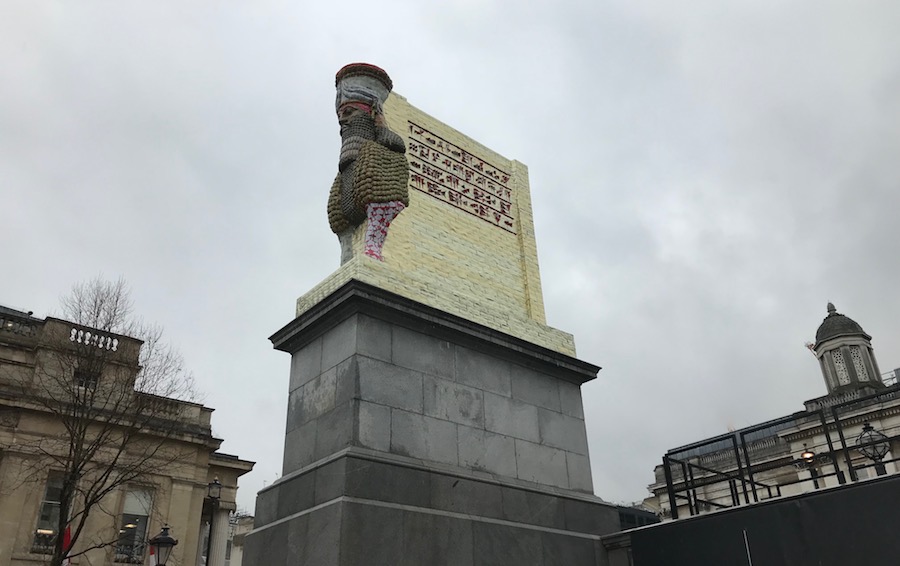 To coincide with the unveiling, Rakowitz is creating a limited-edition artwork using date syrup tins sourced from Karbala in Iraq. Each is accompanied by a book of date syrup recipes, including contributions from chef Claudia Roden, Middle Eastern restaurant Honey & Co., and the artist’s mother, Yvonne Rakowitz. A new range of products from design company Plinth and the Mayor of London will accompany the work, inspired by the use of food in Rakowitz’s art as a way of bridging cultural and political divides. It includes tote bags, wooden spoons and aprons, and the items feature the Arabic proverb: A House With A Date Palm Will Never Starve. A portion of the profits from the merchandise sales will be given to support the Mayor of London’s educational projects. These will be available at a pop-up in Trafalgar Square on the 28 March, and online at plinth.uk.com.

Michael Rakowitz was born in New York in 1973 and lives and works in Chicago, where he is professor at Northwestern University. His first museum survey Backstroke of the West was at the Museum of Contemporary Art in Chicago in 2017/18. Rakowitz’s work explores global issues and invites others into the conversations fostered by his public projects, installations and events. 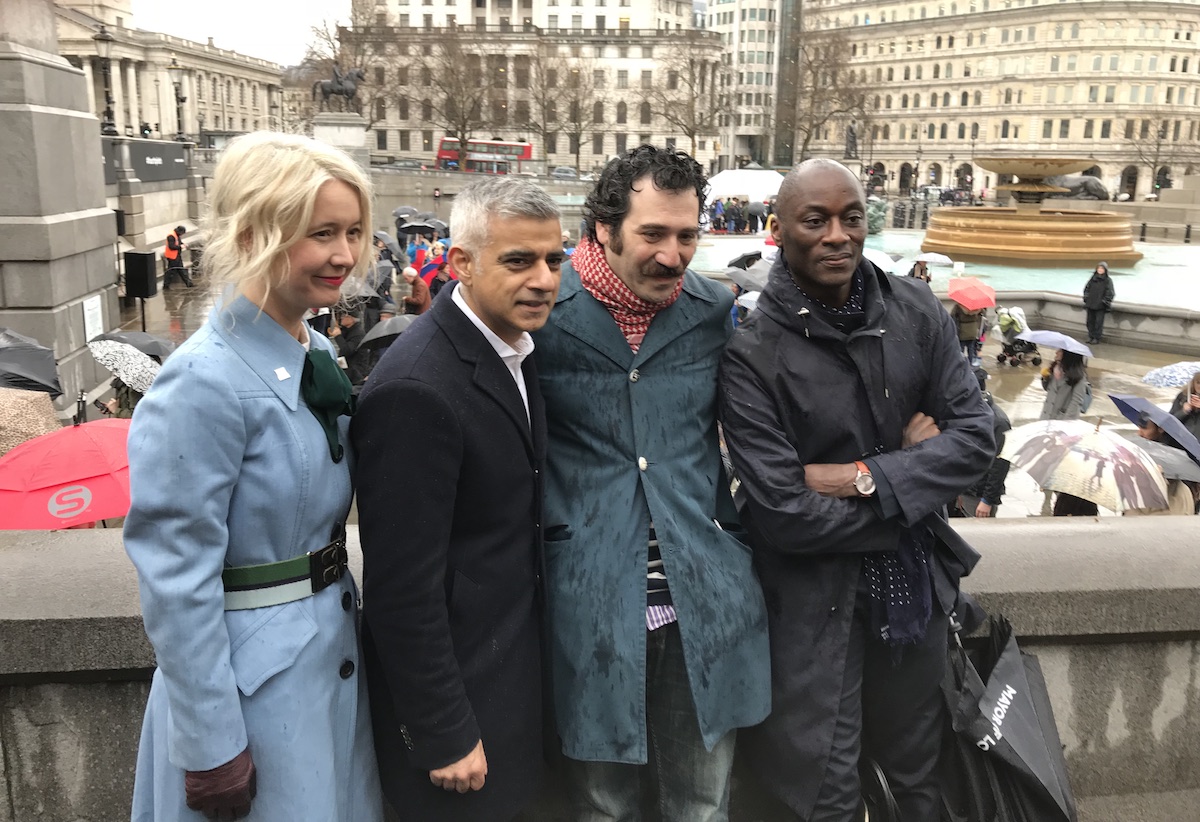 The Fourth Plinth Programme is the most popular public art project in the UK. Funded by the Mayor of London with support from Arts Council England, the programme invites world-class artists to make astonishing new works for the centre of the capital city. An established icon for London, it brings out the art critic in everyone.The programme was initiated in 1998 by the RSA with the support of the Cass Sculpture Foundation for the following commissions: Ecce Homo by Mark Wallinger (1999), Regardless of History by Bill Woodrow (2000) and Monument by Rachel Whiteread (2001).

In 1999 responsibility for Trafalgar Square was transferred to the Mayor of London and the Fourth Plinth Programme is now led by the Mayor’s Culture Team, under the guidance of the Fourth Plinth Commissioning Group (FPCG). Its first commission was Marc Quinn’s sculpture Alison Lapper Pregnant, unveiled in September 2005. It was followed by Thomas Schütte’s Model for a Hotel in 2007 and by Antony Gormley’s One & Other in 2009. Yinka Shonibare MBE’s sculpture Nelson’s Ship in a Bottle was unveiled in 2010. Powerless Structures, Fig 101 by Elmgreen & Dragset followed for 2012. Katharina Fritsch’s Hahn / Cock, was launched in July 2013 and Hans Haacke’s Gift Horse in 2015. Really Good by David Shrigley was the 11th commission and unveiled in 2016.