Tate Britain has unveiled a major new commissioned work by Mike Nelson. The Asset Strippers has been created for the annual Tate Britain Commission, supported by Sotheby’s, which invites artists to create a new artwork in response to the grand space of the Duveen Galleries.

Mike Nelson has transformed the heart of Tate Britain into somewhere between a sculpture court and an asset strippers’ warehouse, carefully selecting objects from a past world, the post-war Britain that framed his childhood. The Duveen Galleries’ origins have informed Nelson’s project as the first purpose-built sculpture galleries in England, intended to rival the sculpture court at the British Museum and the V&A’s cast room, turning the neo-classical galleries into a warehouse of monuments to a lost era and the vision of society it represented. 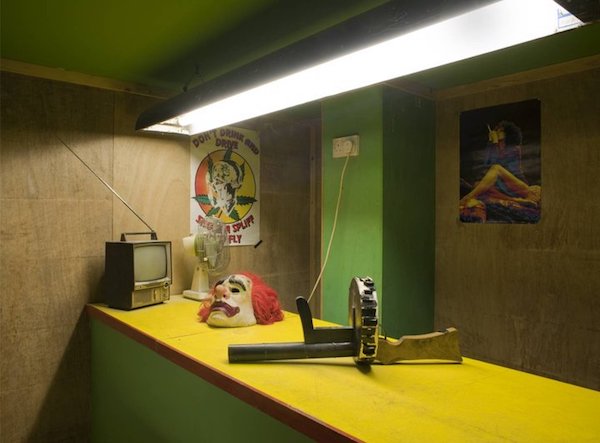 The artist has scoured online auctions of company liquidators and salvage yards to amass a collection of objects which point to the decline of British industry, infrastructure and the welfare state. Similar to the ancient artefacts displayed in museums, The Asset Strippers presents remnants from a bygone era: knitting machines from textile factories reminiscent of the ones he grew up around in the East Midlands, woodwork stripped from a former army barracks, graffitied steel awnings used to secure a condemned housing estate and doors from an NHS hospital. Presented together in an installation which fills the Duveen Galleries, Nelson creates a melancholic journey through Britain’s recent social and political history.
Nelson is interested in the cultural and social contexts behind the objects he has carefully selected, as well as their material qualities. As the artist explains: “Their manipulation and arrangement subtly shifts them from what they once were into sculpture, and then back again to what they are – examples of the machines and equipment left over from industry and infrastructure. The exhibition weaves this allusion with that of British history. It presents us with a vision of artifacts cannibalised from the last days of the industrial era in place of the treasures of the empire that would normally adorn such halls.”

Isabelle Paagman Senior Director, European Head of Private Sales, Sotheby’s said: “Each year, the Duveens Commission brings a spectacular installation to the heart of Tate Britain. It is with great pleasure that we support the commission in its twelfth iteration, which will see Mike Nelson take on the historic architecture of the Duveen galleries with a labyrinthine sculptural work, attesting to the artist’s unique contribution to the British artistic landscape.”