When I went to the Royal Academy Summer Exhibition this year I noticed that Dame Elisabeth Frink’s iconic Horse and Rider located in front of Cafe Nero at Picadilly and Dover Street had gone missing. This grade two listed sculpture had stood at the foot of Dover Street since 1975.

“Dame Elisabeth Frink RA was one of the leading artists of the 20th century. She was considered an ideal candidate to become the first female president of the Royal Academy. ” – Christopher Le Brun PRA

The Frink was originally commissioned by Trafalgar House in 1974 for its site in Dover Street. It will be missed by many visitors to the cafe. I remember many afternoons sitting in the shadow of the sculpture enjoying a coffee. When the building was opened in the 1970s the work of art stood outside the Russian National air carrier Aeroflot’s London office.

The work of art has now undergone a full restoration and is part of the £10 million public works regeneration of New Bond street and Burlington Gardens. This includes the new David Chipperfield designed entrance to the Royal Academy of Arts in the former Museum of Mankind location. 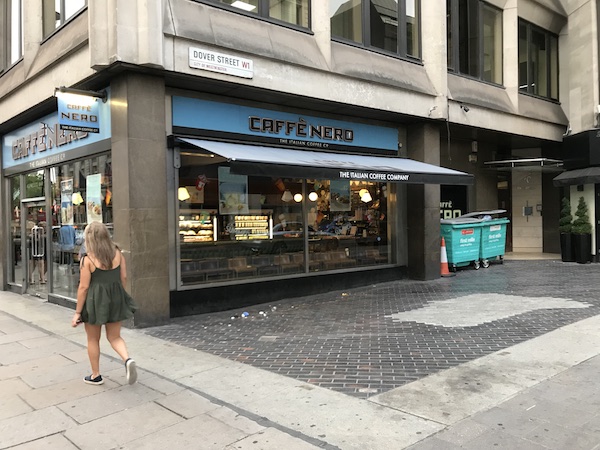 RA president Christopher Le Brun said: “Dame Elisabeth Frink RA was one of the most important artists of the 20th century. Elected as a Royal Academician in 1977, her prestige was such that she was considered an ideal candidate to become the first female president of the Royal Academy. We are delighted that Horse and Rider has been given to Westminster and will be displayed in pride of place in the New Bond Street Town Square, enabling this masterpiece to be enjoyed and admired by the local community as well as all the new visitors to the area.”

The bronze, which used to be in Dover Street, was created as “an ageless symbol of man and horse” was recently donated by the Crosstree Real Estate Partners to Westminster Council.

With funding from the Mayor’s Office and the New West End Company, the council has created a new town square between New Bond Street and Burlington Gardens. It is part of a major project ahead of the expected additional 60 million visits to the area when the Elizabeth line Bond Street station opens at the end of the year.

Jace Tyrrell, chief executive of the New West End Company, said: “The Horse and Rider sculpture forms an important part of this development, becoming a new artistic landmark for the district.”
The RA is marking its 250th anniversary this year.

Dame Elisabeth Frink RA (1930-1993) was born in Suffolk and attended the Guildford School of Art in 1947 and the Chelsea School of Art 1949- 1953. Her first major commissions were the Harlow New Town Boar, and the Blind Beggar and Dog in Tower Hamlets. Her preferred sculptural technique involved modelling directly into plaster and then modifying the work with carving tools. Figurative sculptures of animals, particularly horses, and men, dominated her work, earning Frink a national and international reputation. She was elected a Royal Academician in 1977 and awarded a DBE in 1982.