Amedeo Modigliani Nu Couché Sur le Côté Gauche 1917 has become the most valuable work ever sold at Sotheby’s—selling for $157 million in the 14 May Impressionist & Modern Evening Sale.

Possibly his greatest nude, the painting was acquired by its previous owner at auction in 2003 for $26.9 million. In 2010, the Modigliani oil painting Nu Assis Sur Un Divan (La Belle Romaine) also of 1917 sold at Sotheby’s New York for $69 million. In 2014 his 1911–12 sculpture Tête achieved $70.7 million at Sotheby’s New York, which was the second highest price for the artist at auction prior to this evening’s sale.

Sotheby’s evening sale of Impressionist and Modern art realised a total of $318.3m double last year’s $173.8m, and an improvement on November’s $269.7m sale in the same category. The Modigliani’s Nu Couché contributed to around half of the final tally at the auction.

Painted a century ago, Nu couché (sur le côté gauche) is the greatest work from the iconic series in which Amedeo Modigliani reinvented the nude for the Modern era. Upon their debut exhibition in 1917, these striking and sensual images quite literally stopped traffic and prompted the police to close the show. Today, the series is recognised as one of the seminal achievements in Modern painting. The shock and awe that Modigliani’s nudes continue to elicit was evident during Tate Modern’s recent celebrated retrospective of the artist’s work that included Nu couché (sur le côté gauche) as its cover star. 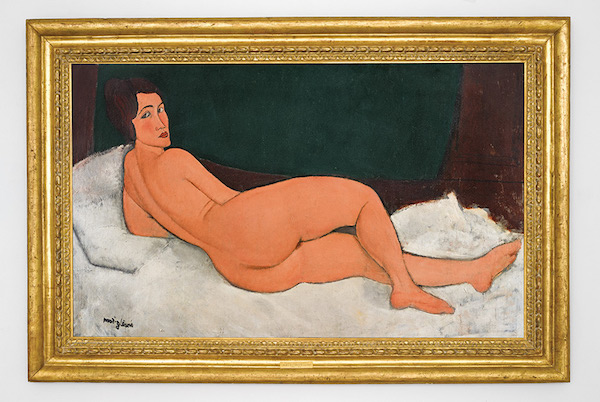 In addition to being the finest example from the series, Nu couché (sur le côté gauche) is distinguished further as the largest painting of Modigliani’s entire oeuvre – measuring nearly 58 inches (147 centimeters) across – and the only one of his horizontal nudes to contain the entire figure within the canvas. The majority of the 22 reclining nudes from the series are found in museums, with particular depth in the United States: the Solomon R. Guggenheim Museum, The Museum of Modern Art and The Metropolitan Museum of Art in New York each hold three examples. Outside of the United States, institutions with reclining nudes include the Long Museum in Shanghai and The Courtauld Gallery in London.

Amadeo Modigliani was born in Italy on July 12, 1884; he suffered considerably from childhood illnesses, the symptoms of which would persist throughout his life until his death from tuberculosis at age 35 in 1920. Although he initially studied art in both Florence and Venice, by 1906 he had settled in the Paris district of Montmartre. Modigliani’s early work, little of which survives, is clearly influenced by French artists such as Paul Gauguin, the Fauves, and Paul Cézanne (like many of his contemporaries, Modigliani was greatly impressed by the memorial exhibition of Cézanne at the Salon d’Automne in 1907). By 1909, Modigliani met and became close friends with the sculptor Constantin Brancusi, resulting in a several year period where he devoted himself to sculpture that was inspired predominantly by African, Egyptian, and ancient Etruscan and Greek sculpture.

With worsening health, Modigliani ultimately gave up sculpture, as his method of working directly with the stone was quite taxing, and devoted himself to painting. It was during this period that he developed his signature style: portraits and nudes that consistently depict elongated, simplified forms and masklike faces, often featuring blank eyes.

Many of his important works belong to museums, including the Metropolitan Museum of Art, New York; Barnes Foundation, Philadelphia; Tate Modern, London; and the Centre Pompidou, Paris. Because of his short life and limited period of artistic production, Modigliani is a highly sought-after artist, resulting in an overall positive market for his works. According to Sotheby’s Mei Moses the compound annual return for Modigliani is 8.2%, with 91.7% of works increasing in value.