A 19th-century copy of a painting by the Baroque artist Bartolomé Esteban Murillo’s titled The Immaculate Conception of Los Venerables has been destroyed by an amateur artist, in Spain.

This is yet another example of works of art in Spain that have been updated by well-meaning Sunday painters. The incident is reminiscent of the restoration of Elías García Martínez, Ecce Homo, by Cecilia Giménez’s in 2012, which gained the nickname ‘Behold The Monkey’. 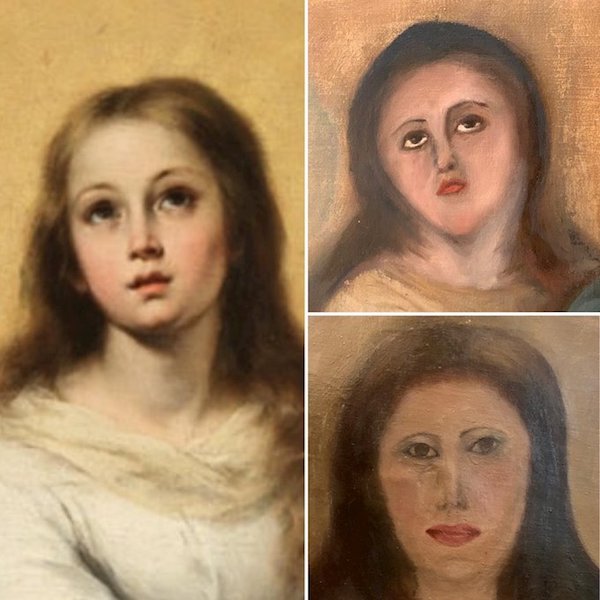 In the case of Ecco Homo, an elderly parishioner stunned Spanish cultural officials with an amateur and unauthorised restoration of a prized local fresco of Jesus. It soon became an international sensation. The fresco which was botched by an 80-year-old woman in a small-town church was responsible for a surge in tourism to the small Spanish village.

Celia Gimenez’s painting became an internet sensation last August when “Ecce Homo” (“Behold the Man”) a mural in a chapel in the town of Borja depicting Christ with a crown of thorns, was disfigured by Seniora Gimenez, while she attempted to restore it. It was re-dubbed “Ecce Mono” (“Behold the Monkey”) on social networking sites internationally. The painting has since become a pilgrimage site for art enthusiasts and the image has been used on T-shirts and wine labels. 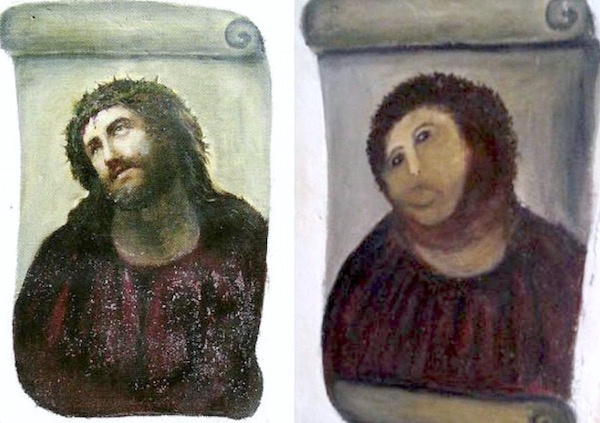 The story broke when fellow worshippers raised the alarm that the 120-year-old fresco had been transformed into something which resembled a character from “Planet of the Apes”. To add to the humiliation, a local Catholic cultural foundation, the Centre for Borjanos, had just received a donation from the granddaughter of the artist to return the fresco to its former glory. ‘The woman, apparently considered herself to be an artist and acted without authorisation from anyone. ‘The church was always open, as it was actively in use. Many people saw the restoration in progress but no one questioned the authority of Seniora Gimenez and even though there was a guard in attendance at all times, no one realised what she was doing until she had finished.’

Experts in Spain have called for strict regulations on the restoration of works of art. It has been reported that the owner of the Murillo copy paid €1,200 ($1,350) to a furniture restorer who over-cleaned the painting before trying to repaint the figure.