A new exhibition featuring iconic naked images of some of the Twentieth Century’s most famous celebrities, thinkers and artists opens at Newcastle’s Laing Art Gallery, this autumn (27 October – 3 March 2019).

Exposed: The Naked Portrait reveals over eighty people – from the world of rock and pop, sport, fashion, art, TV, film and theatre, plus writers, philosophers and those involved in infamous liaisons – portrayed either completely nude, partially clothed or where nakedness is implied.

This fascinating exhibition of photographs, paintings, drawings, prints and film from the National Portrait Gallery Collection invites the viewer to contemplate a multitude of questions and philosophical concepts; is being seen naked a ‘harmful’ or a welcome experience? Does it reveal a shameful secret or achieve longed-for publicity for the sitter or a chosen cause? Many of the images convey either a sense of vulnerability or self-assurance.
The exhibition is a partnership project, jointly curated between the National Portrait Gallery and the Laing Art Gallery. Laing Exposed curator Amy Barker says “The various meanings of ‘exposed’ can be found in the portraits in this exhibition, hence its title. A distinction is often made between the naked and the nude. Nakedness is associated with authenticity – ‘the naked truth’. In contrast, the nude belongs to a tradition of idealised figures that extends back to ancient Greece and was central to artistic training from the Renaissance to the late nineteenth century.

“All of the images in ‘Exposed’ are nude portraits rather than depictions of the nude. This is due to their focus on particular individuals. There are numerous reasons for artists to create nude portraits and for sitters to pose for them. Freed from the social and cultural markers of clothing, naked portraits explore various expressive and formal questions. The portraits in this display show that naked portraits can be flattering or honest, seductive or shocking, vulnerable or liberating.” 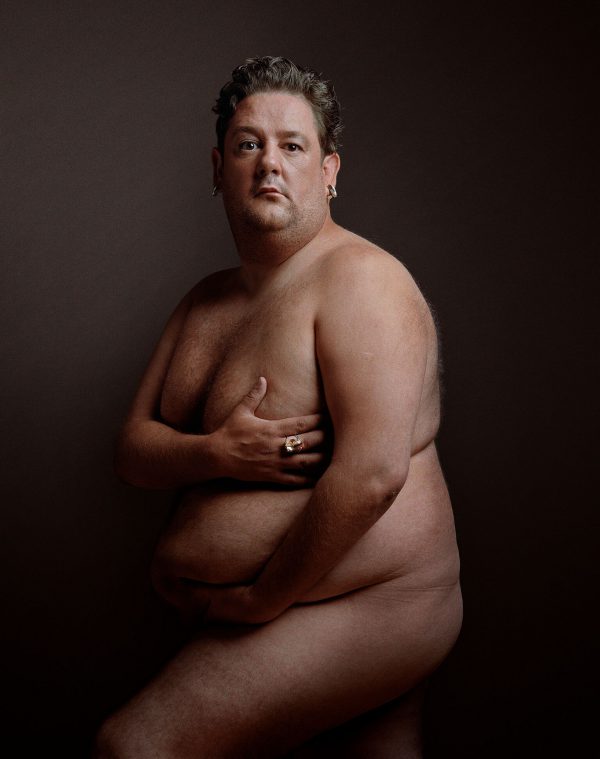 They can also be humorous. Johnny Vegas mimics the famous Demi Moore Vanity Fair cover, in which she posed naked for Annie Leibovitz while heavily pregnant. Vegas, then very overweight, modestly covers a ‘moob’ while the other hand protectively supports his stomach.

Similarly, Barry Humphries was photographed as Dame Edna Everage by Lewis Morley in 1982, cheekily paying homage to the photographer’s own famous portrait of Christine Keeler sitting naked, the wrong way round on a Habitat chair. It became one of the defining images of the Sixties, not least because of its combination of pin-up and icon, suggestive both of sexual liberation and, at the same time, of the penalties of sexual exploitation. It was taken in May 1963, when she came to Lewis Morley’s studio above the Establishment Club in Greek Street, to be photographed to promote a film about the infamous Profumo Affair.

The photo of Christine Keeler occupies a morally ambiguous universe and visitors to Exposed at the Laing will surely consider the roles that gender and sexuality play in many of the other the portraits featured in the exhibition. There are clearly elements associated with nude figures, such as the eroticised or idealised body. Although such images can obscure the line between art and pornography, the portraits featured in Exposed never stray into what could be considered offensive. Challenging, certainly – but salacious, no.

The exhibition also explores postmodern and feminist theories about how the naked body has been – or should be – reappraised in art. Nadav Kander’s 2008 photograph of the Team GB cyclist Rebecca Romero sitting naked on her track bike and Alastair Morrison’s 1996 shot of the athlete Jacqui Agyepong crouched on invisible ‘marks’ (left) reveal another sense of the phrase ‘powerful women’. When she was sixty-one years old, Germaine Greer posed for Penny Borland and the resultant image of the writer and broadcaster is laden with humour, confidence and inner, mental strength.
Greer said: “It was my idea to take my clothes off because I did not fancy being portrayed on my bed like an old lady… I don’t usually have any clothes on in that room and I don’t have any clothes on for a good half of my life”.

Dame Vivienne Westwood was photographed in her late sixties, naked on an antique sofa, by Juergen Teller. He commented: “There should be nothing shocking about it apart from that she looks so beautiful and that she’s so comfortable and open with herself… I think people should be like that.” 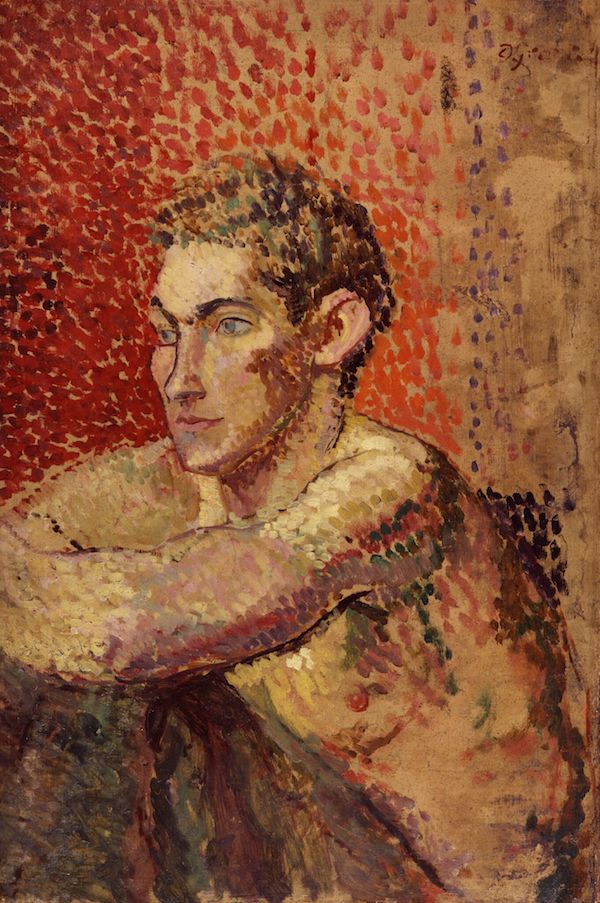 Pennie Smith’s photograph of the pioneering post-punk band The Slits, also subverts established traditions of naked representation. Smith’s image shows the band, most notably with lead singer Ari Up dangling from a tree branch, semi-naked and caked in mud. While Andy Earl’s controversial image of Bow Wow Wow that was the cover of their debut album, recreates Manet’s Le Déjeneur Sur L’Herbe, with the then-teenaged Annabella Lwin naked, surrounded by her fully-clothed male bandmates.

“Yeah, that was a shock for my mother,” Lwin said wryly in an interview with The Guardian. In fact, such was her mother’s indignation, Scotland Yard launched an investigation into whether the image represented the exploitation of a minor for immoral purposes. Earl’s photograph held in the National Portrait Gallery Collection is travelling to Newcastle for Exposed. For those worried about seeing the photo, Lwin’s own thoughts may reassure them: “It was art,” she says, dismissing concerns that the image of her in the all-together, while only a teenager, hangs in one of the nation’s great art collections. “It’s quite a compliment.”

The Bow Wow Wow image also has echoes of Lee Miller’s famous Picnic photograph from 1937. This bohemian gathering of artists, shows Nusch Eluard, Paul Eluard, Sir Roland Algernon Penrose, Man Ray and Adrienne ‘Ady’ Fidelin shows the group of friends relaxing on holiday in Mougins, in the south of France. Penrose had met the American-born photographer and photojournalist Lee Miller (1907-77) in Paris in 1937, and this photograph depicts a carefree moment before 1940, when Miller became British Vogue’s first female war correspondent and photojournalist.

Other artists pictured in Exposed include Gilbert & George, Tracey Emin, Sarah Lucas, Lucien Freud and Sir Antony Gormley. On the other side of the lens or canvas, some of the photographers and painters are as renowned and famous as their sitters. Pieces by David Hockney, Annie Leibovitz, Linda McCartney, Robert Mapplethorpe, Lord Snowdon, David Bailey, Mario Testino, Cecil Beaton and Norman Parkinson form a significant part of this fascinating show.

The series of three photographs by John Lennon, of himself with Yoko Ono, were taken when the former Beatle was planning to release his first solo album, Unfinished Music No. 1: Two Virgins, in 1968. The cover image was taken in private in Ringo Starr’s flat in Montagu Square. The evening following the photo shoot, Lennon requested Jeremy Banks, who worked closely with Lennon as art director, to have the photographs secretly developed for use on the cover. Upon the album’s release in 1968, the images provoked so much outrage that the album was sold in a brown paper wrapper. Lennon was unbowed: “It isn’t anything. We’re all naked really.”

All income generated from ticket sales support the Laing Art Gallery’s ambitious exhibition programme, help the gallery to inspire audiences through innovative learning activities and help keep the permanent collection free to all. The Laing Art Gallery is managed by Tyne & Wear Archives & Museums on behalf of Newcastle City Council and is home to an internationally important collection of art, focusing on British oil paintings, watercolours, ceramics, silver and glassware. The Gallery holds regularly changing exhibitions of historic, modern and contemporary art, and events including artist and curator talks and family activities. Recent achievements include becoming the first gallery to benefit from the Contemporary Art Society’s Great Works Scheme with an acquisition of a Glenn Brown work, and winning an award for Best Programme 2016 from Living North Magazines.