The American photographer Nan Goldin was arrested yesterday and charged with disorderly conduct. She and a group of protesters were stopped outside the Manhattan office of New York Governor Andrew Cuomo.

The P.A.I.N activists founded by Goldin are protesting the Sackler family’s involvement in the opioid crisis which has killed over 400,000 people in the US.

Governor Cuomo has been blamed for complacency in not tackling prescription overdose deaths. Placards reading “Governor, while you wait New Yorkers die” were displayed. The group chanted “Cuomo lies, people die!” with arms linked in front of the government offices. Arrests followed as protesters had blocked the building’s access. 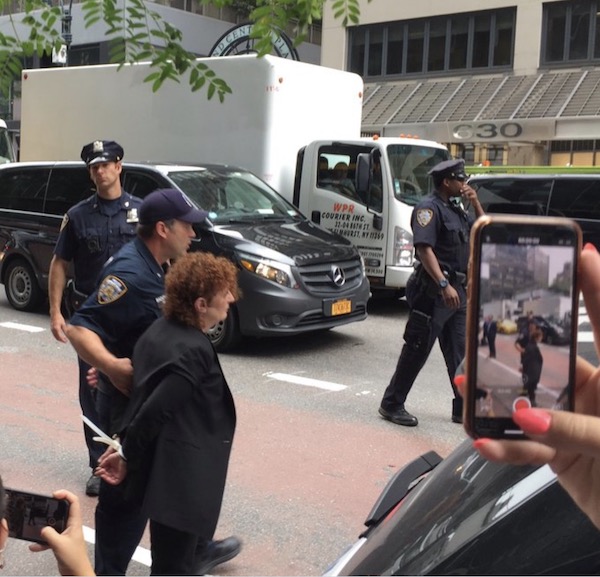 The Sackler family have made an offer to settle litigation. In a statement, Purdue did not state an exact settlement amount but it’s thought to be in the region of $12 billion. They also promised to make Purdue Pharma a public trust. The protesters have stated, “Too little too late”.

Goldin responded in an interview, “I think it’s completely unacceptable and so deeply cynical”. “To them, this is really good PR–it looks so benevolent and generous and it makes it look as though they’re paying their dues.”

“I’d rather that the Sackler family faced trial and that their personal wealth was clawed back” far more significantly, the artist says, adding, “They’ve ignited a public health emergency and they need to make restitution and they need to be held responsible.”

NBC reported the deal could see Purdue declare a form of bankruptcy allowing it to restructure into a for-profit “public benefit trust,” that would fund addiction treatment.

The protest was organised by Housing Works along with VOCAL-NY and the Harm Reduction Coalition, and was aimed at the governor, who they claim “he’s progressive, but his policies and funding for the overdose crisis is regressive,” activist Jasmine Budnella told Patch. She added that “we’re losing thousands of people a year—year after year.”

The Sacklers made their fortune promoting addiction. OxyContin is one of the most addictive painkillers in the history of pharmacology. They advertised and distributed their medication, knowing all the dangers. The Sackler family and their private company, Purdue Pharma, built their empire with the lives of hundreds of thousands. The bodies are piling up. In 2018, in the US alone, more than thirty-three thousand people died from opioid overdoses, half of them from prescription opioids; 80 per cent of those who use heroin or buy fentanyl on the black market began with an opioid prescription. These statistics are growing exponentially.

Artist Nan Goldin stated; “I’ve started the group, P.A.I.N. (Prescription Addiction Intervention Now), to hold the Sacklers accountable. To get their ear, we will target their philanthropy. They have washed their blood money through the halls of museums and universities around the world. We demand that the Sacklers and Purdue Pharma use their fortune to fund addiction treatment and education. There is no time to waste.”