Nan Goldin has woven a practice revolving around human crisis whether it be the 1980s AIDS epidemic or domestic abuse. Her own experiences offer a first-hand insight into many of today’s issues  “Most of my community was lost to AIDS,” Goldin states in a new essay highlighting her latest cause, the current Oxycontin addiction pandemic.

“I can’t stand by and watch another generation disappear.” – Nan Goldin

Opioids are now responsible for a 19 percent rise in death rates in the US with over 52,404 recorded in 2016. All evidence suggests the problem has continued to worsen in 2017. This is a crisis Goldin has had first-hand experience with. 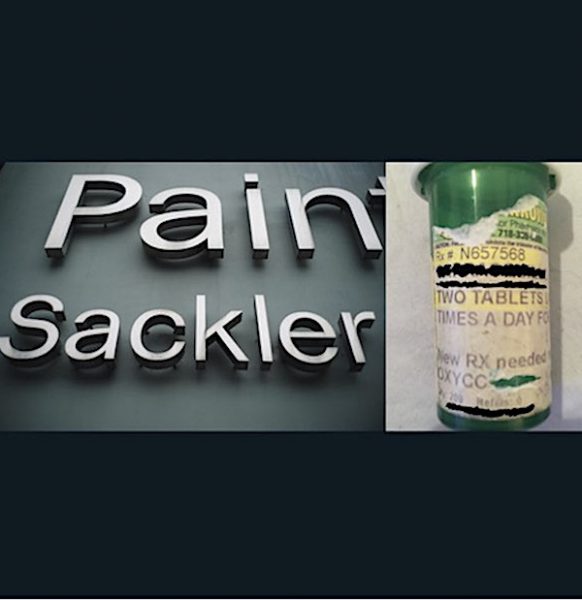 Her latest series of photographs depict the artist in a state of inebriation from the pills. Goldin was prescribed the drug after surgery in Berlin. Her Oxycontin addiction caused her to over-dose and nearly die from their side effects. She is now recovering and angry, but instead of expressing her anger privately Goldin has come out by calling for the art patron Sackler family who own Perdue Pharma, which has made billions from making Oxycontin to not only discontinue the addictive meds but to set up free rehab facilities around the world to help the millions effected by addiction.

Goldin’s latest work titled Sackler/Pain, explores the families philanthropic donations to galleries and museums around the world. They include the Elizabeth A. Sackler Center for Feminist Art at the Brooklyn Museum, The new V&A courtyard and the Sackler/Serpentine gallery.

Golden writes about her return to New York from Germany and going from three pills a day to 18. With the rise in price and unavailability of prescription Oxycontin, she started snorting fentanyl a street drug replacement. “I wanted to get clean, but I waited a year to go into treatment because of my fear of withdrawal,” she says. “Then in January, I went into rehab for two and a half months. I was one of the fortunate ones who could afford an excellent hospital, which isn’t an option for most people.” After being clean for a year, she is ready to share her experiences.

P.A.I.N.has produced an open call for museums and universities to refuse future donations from the Sacklers, will launch a petition to hold public actions, and build a robust social media presence to correct misinformation about opioids.  “illustrating the impact of the crisis on individuals, families, and communities.”

“To get their ear we will target their philanthropy,” Goldin states. “They have washed their blood money through the halls of museums and universities around the world. We demand that the Sacklers and Purdue Pharma use their fortune to fund addiction treatment and education. There is no time to waste.”

I SURVIVED THE OPIOID CRISIS. I narrowly escaped. I went from the darkness and ran full speed into The World. I was isolated, but I realized I wasn’t alone. When I got out of treatment, I became absorbed in reports of addicts dropping dead from my drug, OxyContin.

I learned that the Sackler family, whose name I knew from museums and galleries, were responsible for the epidemic. This family formulated, marketed, and distributed OxyContin. I decided to make the private public by calling them to the task. My first action is to publish personal photographs from my history.

My relationship to OxyContin began several years ago in Berlin. It was originally prescribed for surgery. Though I took it as directed, I got addicted overnight. It was the cleanest drug I’d ever met. In the beginning, forty milligrams was too strong but as my habit grew there was never enough. At first, I could maintain. Then it got messier and messier. I worked the medical field in Berlin for scripts. When they shut me out, I turned to FedEx. That worked until it didn’t. The drug, like all drugs, lost its effect, so I picked up the straw.

I returned to New York. My dealer never ran out of Oxy and delivered 24/7. He had massive prescriptions and made massive amounts of money. For every penny, he spent on a script he made a dollar on the black market. I went from three pills a day, as prescribed, to eighteen. I got a private endowment and spent it all. Like all opiate addicts, my crippling fear of withdrawal was my guiding force.

I didn’t get high, but I couldn’t get sick. My life revolved entirely around getting and using Oxy. Counting and recounting, crushing and snorting was my full-time job. I rarely left the house. It was as if I was Locked-In. All work, all friendships, all news took place on my bed. When I ran out of money for Oxy, I copped dope. I ended up snorting fentanyl, and I overdosed.

I wanted to get clean, but I waited a year to go into treatment because of my fear of withdrawal. Then in January, I went into rehab for two and a half months. I was one of the fortunate ones who could afford an excellent hospital, which isn’t an option for most people. I’ve stayed clean for almost a year. Getting off drugs and staying off drugs are two different things, each painful in their way. But going back is not an option. My endowment was cut off, and I regret the money I wasted. I regret the time I lost, which is irretrievable. Now I find the world hard to navigate, but I have a sharpened clarity and a sense of purpose.

I believe I owe it to those affected by this epidemic to make the personal political. I read the brilliant articles by Patrick Radden Keefe, and Margaret Talbot (in the New Yorker) and Christopher Glazek (in Esquire) and I interpreted them as a call to arms. I knew of no political movements on the ground like ACT UP. Most of my community was lost to AIDS. I can’t stand by and watch another generation disappear.

The Sacklers made their fortune promoting addiction. OxyContin is one of the most addictive painkillers in the history of pharmacology. They advertised and distributed their medication knowing all the dangers. The Sackler family and their private company, Purdue Pharma, built their empire with the lives of hundreds of thousands. The bodies are piling up. In 2015, in the US alone, more than thirty-three thousand people died from opioid overdoses, half of them from prescription opioids; 80 percent of those who use heroin or buy fentanyl on the black market began with an opioid prescription. These statistics are growing exponentially.

I’ve started a group, P.A.I.N. (Prescription Addiction Intervention Now), to hold them accountable. To get their ear, we will target their philanthropy. They have washed their blood money through the halls of museums and universities around the world. We demand that the Sacklers and Purdue Pharma use their fortune to fund addiction treatment and education. There is no time to waste. – Essay Courtesy Artforum

Post Script: It has been pointed out to Artlyst that the descendants of the Dr. Arthur M. Sackler wing of the family has never owned a share of Purdue Pharma nor benefited in any way from the sale of Oxycontin. Arthur M. Sackler passed away in 1987, eight years before Oxycontin existed. His brothers, Mortimer and Raymond, purchased his one-third option in Purdue Frederick from his estate a few months after his death. None of his descendants have had any involvement with, nor ownership of, Purdue Pharma or benefitted from the sale of Oxycontin in any way.