The National Gallery is re-opening its doors, somewhat in advance of the Tates. The Titian show of mythological paintings made for Philp II of Spain is once again available, though it isn’t continuing on to Scotland. Cue for cries of ‘Oh, but this is so unfair!’ The fact is that two of the four paintings in the series belong to foreign museums – one to the Prado, the other to Boston – and now, after a long absence, these institutions want their masterpieces back. They are already making quite a concession by agreeing to allow them to remain in London a while longer. Before the big shutdown, the paintings were only on view at the NG for three days. I saw them then and wrote about them here, noting that the compositions, though superbly beautiful, could not, for today’s taste, be more politically incorrect. Perhaps the Me/Too brigade will now don anti-viral masks and arrive to picket the show. Talking of masks, you won’t get into the re-opened NG without one.

The main thing to celebrate, however, is the renewal of access to the NG’s superb permanent collection 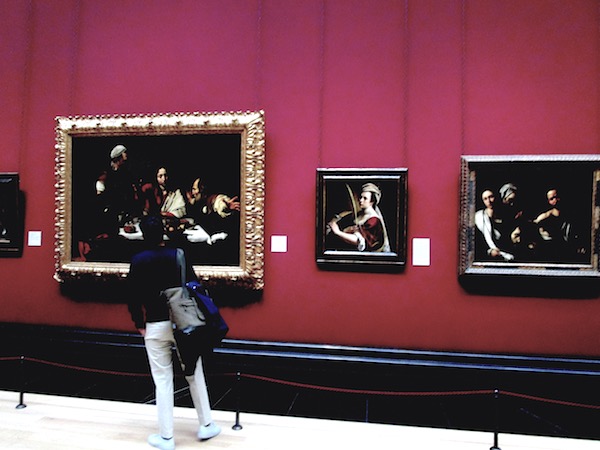 The main thing to celebrate, however, is the renewal of access to the NG’s superb permanent collection available to the public for free. The conditions under which this can now be enjoyed are very different from those that prevailed of yore. You have to book in advance, even for free entrance (that is to say, for a visit without the Titian show). For the press view, you went in at one entrance, the one furthest to the west, and made your way through the building to emerge at the one furthest to the east. I suspect the gallery will henceforth discourage aimless wandering around, and will certainly forbid visitors to crowd together, should they evince any inclination to do so. The gallery staff, however, were particularly charming and helpful during my visit.

What I most wanted to see, apart from how the new visitor mechanism works, was a huge newly decorated space. This – room 32, now designated the Julia and Hans Rausing Space, after the patrons who paid to upgrade it, is one of the largest spaces in the building. The rehab has been in hand for 21 months – which is to say from considerably before the pandemic hit. Going forward with the rehab has
Involved in going back to the original look of the gallery – that is to say to its first, High Victorian identity. As the NG handout informs one:
“The decision was taken to reconstruct faithfully [the original] lunettes: their designs were traced, cut and painted with coloured matching the original pigments. One exception is the lunette dedicated to Titian, above the south doorway, which was uncovered completely and restored. As well as reinstating the dark red cloth to the walls, the ornately painted frieze has been put back, and the plaster decoration tip-gilded with 23.5-carat gold leaf.”

The result is pretty splendid: an excellent example of more being more.

The space is now hung with Italian baroque paintings, among them those from the legacy of the late Denys Mahon. Also present are three Caravaggios, and the work by Artemisia Gentileschi that the NG recently acquired. Artemisia is, of course, a big deal nowadays. The painting, quite small, is a self-portrait of the artist, lightly disguised as a martyred saint. It is. By any standard, an excellent painting. Does it make one think that Artemisia was a game-changer? Alas, I think not. It shows that she was an excellent second-generation baroque artist, making use of an already well-established idiom. Its interest, apart from its undoubted quality, lies in its autobiographical element. Artemisia, a female artist, exceptional in her epoch for that reason, was raped by one of her artist-father’s assistants. At the trial of the miscreant, she was tortured to make sure she was telling the truth.

However, as the direct comparison offered here shows, Caravaggio, pretty much of a miscreant himself, was a much more original artist, and much more widely influential over the art of his own time. It’s a case of bad boy versus good girl, and the bad boy wins hands down. You can’t alter the past, however, much you might like to, in order to satisfy the moral imperatives of the present.

The Royal Academy’s Picasso On Paper Exhibition is already completely booked up in advance of the reopening of the gallery. As for the National Gallery, better hurry!

Read More About The National Gallery