Banksy seems to be active again these days with two new murals, one in London at Marble Arch, where Extinction Rebellion’s climate change activists were protesting for a few weeks. His latest offering is in Venice in time for the 58th Biennale. To make things even more difficult for the press, he has not been posting credit for his work on the official Banksy website lately, making authentication difficult for us writers.

The new artworks seem to be the real deal and experts have been quick to agree, but without the official Pest Control seal of approval, it is impossible to say they are Banksys’ hand for sure.

The new Venice Biennale stencil depicts a migrant child wearing a lifejacket while holding up a sparkling magenta coloured flare. It could have been created as a reaction to the controversial Swiss-Icelandic artist Christoph Büchel’s fishing ship ‘Barca Nostra’, which sank off the Libyan coast killing over 1,000 migrants who were locked in the below deck cabin of the boat. The episode was the worst shipping disaster in Europe since the Second World War. The display of this boat at an arts festival has backfired and created a storm on Twitter, although it has raised awareness and remembrance, is this something that is acceptable? 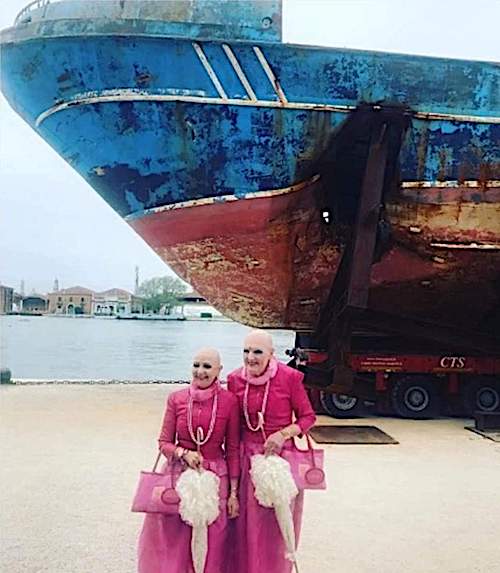 Eva and Adele: This is the type of totally inappropriate Biennale behavior that has come out of wrongly displaying a grave as part of an arts festival

The Biennale’s artistic director, Ralph Rugoff told John Snow on Channel 4 news: “It’s one thing to see an image in a newspaper or on television but when you confront the physical thing, you have a whole other group of sensations. You feel it in a different way; you’re processing the information in a different way, hopefully that leads you to think in a different way.”

Matthew Collings stated in the Evening Standard that “Over the six-month duration of the Biennale the boat will be a sign among signs. Venice is replete with visible reminders of militarism, colonialism and looting. The Biennale itself is such a reminder: how was it paid for when it began, 120 years ago? Today it is all rich and privileged fun, and now the boat is a great big reminder of separation, the remnants of a physical object standing for those excluded from the fun. Not just the ones who died in it, but the part of the world exploited to create the extra wealth for all this fun.”

Waldemar Januszczak from the Sunday Times wrote that: “There’s been a lot of fake news spread about on Twitter about the [migrant] boat at the Venice Biennale. It is not true to say that it has no context and ignores death. The context is spelled out clearly in the catalogue. I found it dark, upsetting, accusatory and powerful….to suggest that the piece somehow glorified or ignored death is, at best, plain wrong.”

OK, I need to shift part of the guilt to the audience. Many seem oblivious to the fact that this is a grave or memorial and not just an installation /sculpture. I saw a number of people taking selfies in front of the wreck…It made my stomach turn!!!! There is no placard to explain what this actually is. This is not educating people. It is easy to interoperate as cynical.

The artwork appeared on a canal yesterday in the Dorsoduro district which has a high student population.

Banksy is an anonymous graffiti artist from Bristol, who uses subversive epigrams and dark humour to provide political and social commentary on streets, walls, and bridges of cities throughout the world. Banksy’s work grew out of the Bristol underground scene, which involved collaborations between artists and musicians. Banksy authentication and artist enquiries or reports of stolen work should be directed to Pest Control. The latest work has not appeared on the official Banksy website, the usual confirmation of an authentic Banksy, but stylistically this looks like the real deal! More to follow.