A painting by the British Artist Lucian Freud from his ‘last great nudes’ series, Portrait on a White Cover has sold at Sotheby’s London for £a record 22.5million / $29.8 million. This is now the most expensive painting by the artist ever sold in London. The previous highest price for a work by the artist was £16.1 million for ‘Pregnant Girl’ also at Sotheby’s in February 2016.

Portrait on a White Cover was painted when the artist was 80 and represents the culmination of Freud’s lifelong engagement with the reclining nude. Alongside the self-portrait, the reclining nude was the defining leitmotif of Freud’s career. Across sixty years of painting, many mutations of painterly style, and a multitude of sitters, he returned to this challenging subject time and again. Portrait on a White Cover sits at the pinnacle of this endeavour. 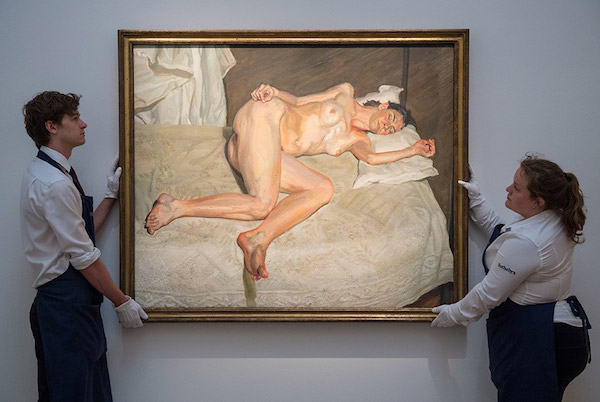 last great nudes’ series, Portrait on a White Cover has sold at Sotheby’s London for £a record 22.5million / $29.8 million

Portrait on a White Cover depicts Sophie Lawrence, who worked for Tate publishing and was spotted by Freud whilst preparing for his Tate retrospective in 2002. This is her only known portrait and there is little written about her in the literature surrounding the artist’s work. She shared her story of sitting for the artist: “I wouldn’t have done it for anyone else, but he is one of the best artists who has ever lived. It was incredibly intimidating, but he made me feel at ease. He was very good at building a rapport with people. I was very fond of him.”

This June, Sotheby’s offered many important pieces by celebrated artists spanning the mid-Twentieth century right through to the present day. Masterpieces by Lucian Freud, David Hockney, Jean-Michel Basquiat, Peter Doig and Yves Klein were among the many highlights that comprise the Contemporary Art Evening Auction which took place on 26 June in London.

PROPERTY FROM THE COLLECTION OF SIR MICHAEL CAINE