The life-sized portrait is the latest in a series of sculptures created by Frances Segelman (Lady Petchey) of Holocaust survivors living in the UK and celebrates Sir Ben’s recent knighthood for his contribution to services to Holocaust remembrance and education. 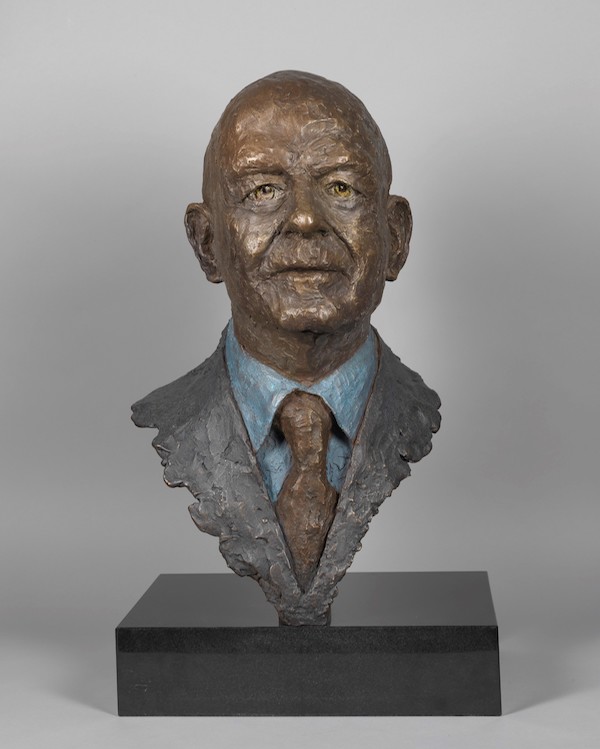 The sculpture is typical of Segelman’s ‘live’ work, with the first clay bust taking just two hours to complete, and subsequently being cast into bronze at Bronze Age Foundry in Limehouse. Helfgott hopes his portrait ‘will be made use of to tell my story and as a memorial to those that were murdered in the Holocaust.’ Helfgott was almost ten years old when Germany invaded his home country of Poland in 1939. He was ghettoized with his family, but in 1942 his mother and youngest sister were shot by the Nazis.

In 1944, Helfgott was sent to Buchenwald concentration camp with his father, and his surviving sister was sent to Ravensbruck. From there he was sent to Theresienstadt ghetto and transit camp before being liberated and sent to England to recuperate with 750 other teenage survivors. He was reunited with his sister in 1947 but discovered that his father had been shot shortly before the war’s end.

In London, Helfgott attended Plaistow Grammar School to make up for six years of lost schooling. His athletic ability was spotted when he joined the Primrose Club for young survivors. He began weight-lifting while at Southampton University and went to Israel to participate in the 1950 Maccabiah Games, where he won a gold medal. He later represented Britain at the 1956 and 1960 Olympic Games and the 1958 Commonwealth Games as captain of the British weightlifting team. In 1963, he founded the ’45 Aid Society to support Holocaust survivors living in the UK. The Society is also now devoted to collecting Holocaust testimonies for use as educative tools.

Frances Segelman (Lady Petchey) said ‘It has been a great honour to sculpt the legendary Sir Ben, and I feel immensely proud this sculpture is now part of the National Portrait Gallery’s Collection. Sculpting Holocaust survivors helps ensure the lives and stories of these extraordinary people are never forgotten.’

Simon Bentley, Chairman of Yad Vashem UK Foundation, said “We are thrilled to be hosting, together with Frances Segelman (Lady Petchey), this prestigious event in honour of our President Sir Ben Helfgott. An inspirational Holocaust survivor who has been dedicated for most of his life in educating others about the lessons of the Holocaust.”

The National Portrait Gallery was founded in 1856 to encourage through portraiture the appreciation and understanding of the people who have made and are making British history and culture. Today it promotes engagement with portraiture in all media to a wide-ranging public by conserving, growing and sharing the world’s most extensive Collection of portraits. The Gallery, just off Trafalgar Square, holds the most extensive Collection of portraits in the world. With over 1000 portraits on display, across three floors, from Elizabeth I to David Beckham, the Gallery has something for everyone. Artists featured range from Holbein to Hockney, and the Collection includes work across all media, from painting and sculpture to photography and video. As well as the permanent displays, the Gallery has a diverse and ever-changing programme of exhibitions and events that promote an understanding and appreciation of portraiture in all forms.