With Pablo Picasso 1932 – Tate Modern’s major exhibition for the first half of this year – ready to open (March 8th), the drumbeats are already beginning. Both The Times (Saturday Review, Rachel Campbell Johnson) and the Sunday Times (Colour Supplement, Laura Freeman) have published laudatory articles. The theme of the exhibition is Picasso’s relationship with Marie-Thérese Walter, one of his mistresses, aged just seventeen when they met. Picasso was then in his 50s. The liaison lasted for around five years. They had a daughter, Maya, but never married.

What was painfully noticeable, in the present climate of #MeToo, was the way these encomiums tended to skitter round the well-established fact that the great artist was a shit to women. Laura Freeman did have more to say about this than Campbell Johnson. She describes the end of Picasso’s relationship to Marie Thérese thus:

‘He edged Marie-Thérese out; sent her cheques, but refused to sign the paintings she kept’.

When he died, in 1973, she was barred from the funeral. In 1977 she hanged herself.’ She wasn’t the only one of Picasso’s women to commit suicide. Jacqueline Roque, his second wife, survived him for a bit longer but shot herself in 1986.

Freeman reports Picasso’s reaction to a 1937 meeting in his studio between Walter and her successor Dora Maar. They had a catfight. ‘It’s one of my choicest memories.’ Picasso said later. 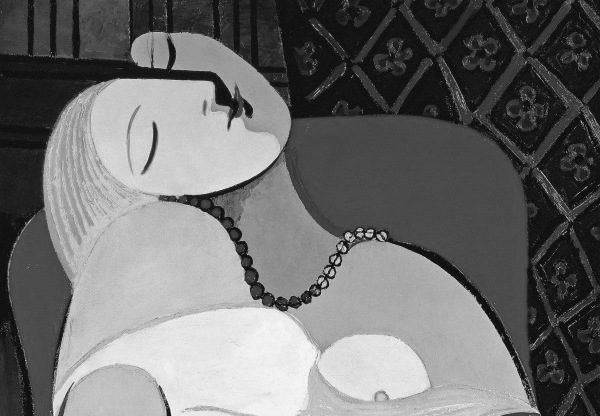 The fact is, of course, that artistic genius has never been intrinsically linked to morality – not to what society recognises as good conduct, nor indeed to what we ourselves recognise in our inner selves as being the right path to take. If anything, the audience for art tends to delight in the fact that many major artists – males in the mainstream Western tradition – were flagrantly ‘bad boys’. Step forward, please, Mr Caravaggio, and take a well-deserved bow.

Now that social norms are shifting; criticism is going to have to take this change into account. At the moment – see a list of other Tate exhibitions scheduled for this year, see indeed the list of recent winners of the Turner Prize – there is a shift towards art that can be thought of as morally righteous (or, as one is tempted to say, morally self-righteous). But these standards can’t be applied retrospectively. Which makes life uncomfortable for critics and art historians.

In fact, where it is now beginning to look as if the only artist who is permitted to be bad, in the old moralistic sense, is a dead artist. Preferably indeed a very famous dead artist.

But it’s hard to see how this double standard will work in the long run.