Marc Glimcher, President and CEO of Pace Gallery, has announced plans to expand in London taking over the empty Blain Southern space located at 4 Hanover Square.

Pace’s new London gallery will open in autumn 2021 following a significant renovation by architect Jamie Fobert Architects. Fobert enjoyed a longstanding relationship with Pace and was responsible for designing their original London gallery on Lexington Street in 2011. For this project, Fobert will completely transform the interior architecture of the existing building to incorporate several flexible gallery spaces. Fobert’sFobert’s refurbishment will include two elegant galleries on the ground floor and will open up the basement level to create an additional 1,000-sq- ft public gallery. The basement and entry-level will be connected by a feature staircase rendered in black steel, giving the impression of a fully integrated space. The new modular layout will allow for dynamic presentations and will accommodate installations of works ranging from intimate to monumental in scale. Space will also be reconfigured to include two substantial private viewing rooms. Visit Pace 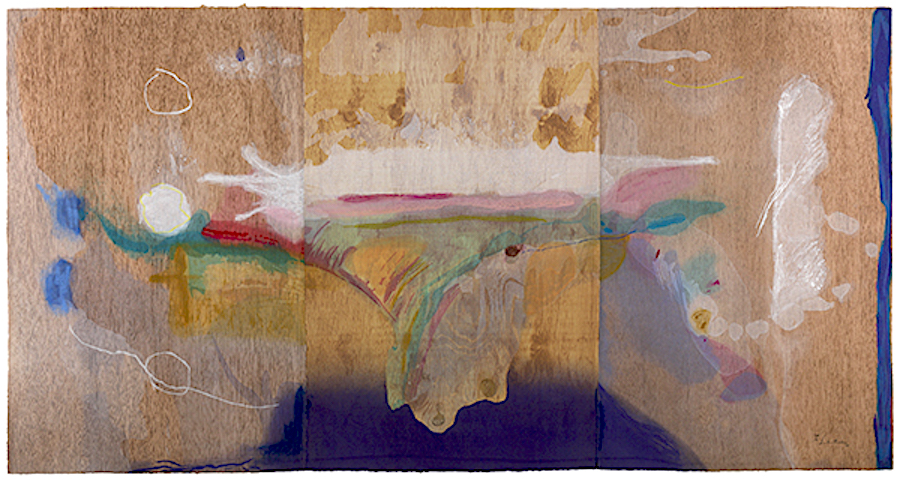 In May 2021, Dulwich Picture Gallery will present the first major UK exhibition of woodcuts by the leading Abstract Expressionist, Helen Frankenthaler (1928-2011). Shining a light on the artist’s artist’s groundbreaking woodcuts, it will showcase works never shown before in the UK, to reveal Frankenthaler as a creative force and a trailblazer of printmaking, who endlessly pushed the possibilities of the medium.

At the age of only 23 Frankenthaler created her influential oil painting Mountain and Sea (1952), the first work produced using her signature soak stain technique – pouring thinned paint directly onto the canvas from above to create broad expanses of translucent colour. It was a breakthrough that would propel Frankenthaler into the spotlight of the New York art scene at a time where Jackson Pollock and Willem de Kooning dominated. This technique went on to influence the artists of the Color Field school of painting, including Morris Louis and Kenneth Noland,

A rare work by controversial English artist Austin Osman Spare (1886-1956) has been discovered on the back of an unassuming watercolour. The hidden painting, which bears a secret portrait of the artist in the bottom left-hand corner, was found by the current owner when he decided to reframe a watercolour that had hung on his wall for many years. It will now be offered at auction, in a sale of Antiques & Collectibles at Mellors & Kirk auctioneers on 9th & 10th December 2020, where it is estimated to fetch £2,000-£3,000. 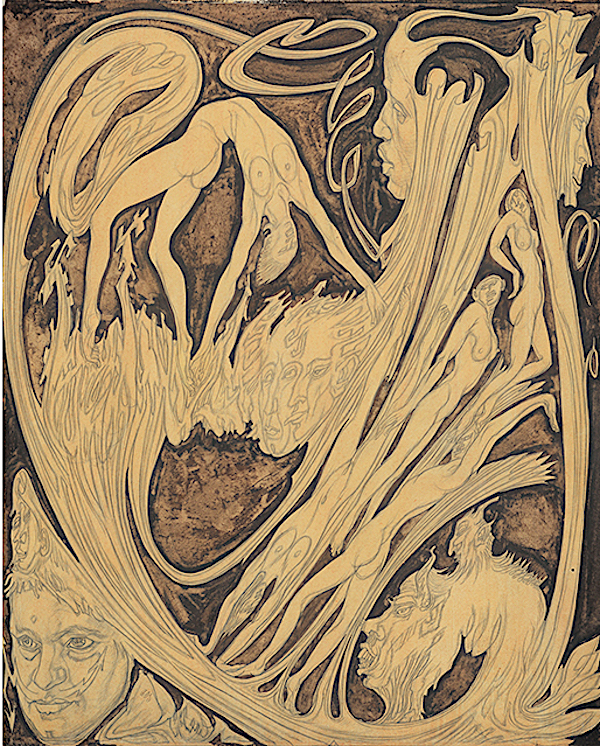 Speaking about the discovery Nigel Kirk, of Mellors & Kirk, said: “We are thrilled that a work by Spare has been discovered after all this time. Much of what Spare produced was disturbing, which probably is the reason why this particular work only came to light when the vendor decided to reframe a watercolour by an amateur artist of little merit (and no connection to Spare) that they had bought years before. We are delighted to offer it for auction, where it can hopefully be displayed publicly, rather than hidden away.”

Austin Osman Spare, born in Smithfield in 1886, the son of a policeman, was an ”enfant terrible” on the Edwardian art scene. He was a draughtsman, painter, illustrator and occultist, whose works often sparked controversy due to their sexually explicit and often frightening ”other-worldly”, or grotesque depictions, which challenged both the scientific beliefs and rules of decency of Edwardian society.

He won a scholarship at the Royal College of Art in South Kensington at an early age and trained as a draughtsman. He also achieved significant press attention for being the youngest entrant at the 1904 Royal Academy summer exhibition. Spare was declared an official war artist in the First World War, but following this became reclusive, working inconspicuously in a series of studios across London, occasionally holding sales of his paintings, during what would now be described as an ”open studio” event. His work was prolific, as well as pioneering, for example, he experimented with automatic drawing, years before the Surrealists.

His range of styles was extraordinary, as a draughtsman his drawing captured those around him accurately and uncompromisingly, so much so that he was compared to Dürer, Michelangelo and Rembrandt. His carefully finished pastel portraits were juxtaposed with works that saw figures emerging from scrawled calligraphy. Spare held exhibitions of his work at the St. George’sGeorge’s Gallery in Hanover Square in 1927, and then at the Lefevre Gallery in 1929.

He was experimental and at one point, based in a studio above the Elephant and Castle Woolworth’sWoolworth’s, Spare spent a period creating much-admired stylisations of film stars, such as Jean Harlow and Mary Pickford, using a technique of altered perspective that he termed ”siderealism”, Pan-like “satyrisations” of male faces and pastel portraits of local cockneys, incredibly old women. Two hundred of his works were presented in an exhibition at the Archer Gallery in 1947. It was a very successful show and led to something of a post-war renaissance of interest in Spare’sSpare’s work.

When a bomb destroyed his flat and all the artwork in it in May 1941, he ended up in a small, dark basement in Brixton. Struggling to survive outside of the gallery system, he came up with the idea of holding exhibitions in South London pubs and continued exhibiting until his death in 1956.

Many exhibitions of his work have since taken place, such as the Greenwich Gallery held, who held an exhibition of Spare’sSpare’s creation in 1964. A catalogue essay accompanied it by the Pop Artist Mario Amaya, who believed that Spare’sSpare’s artworks depicting celebrities from the late 1930s and 1940s, represented ”the first examples of Pop art in this country”. In 2016 a new street was named after the artist, near his former home in Elephant and Castle and collectors of his work include rock stars, such as Jimmy Page of Led Zeppelin.