The Paul Hamlyn Foundation have unveiled the Ten visual artists and composers living and working in the UK who will each receive £60,000 with no strings attached, making this the largest and most flexible award for individual artists in the UK. The recipients join an impressive list of artists that the Foundation has recognised over the last twenty-four years. Guest speaker Kwame Kwei-Armah OBE, award-winning writer, actor and playwright, and Artistic Director of the Young Vic, spoke with passion about the importance of support for artists’ time and space.

Launched in 1994, the awards support visual artists and composers with financial assistance at a pivotal moment in their careers. Each award offers recipients £60,000 over three years – with no obligations or conditions as to how the money is used. Not only the largest award in the UK, this “no strings attached” approach sets the awards apart from other schemes by giving artists the time and freedom to develop their creative ideas and to further their personal and professional growth. In 2017, each award increased from £50,000 to £60,000 in acknowledgement of the increasing costs of living in the UK. 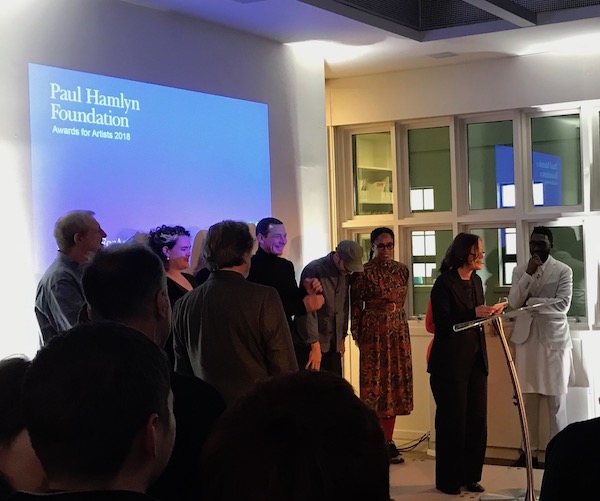 Jane Hamlyn, Chair, Paul Hamlyn Foundation said: “Finding the time to reflect, explore and experiment – to produce new work or move into a new phase of creative expression – is not always easy for visual artists and composers. Awards for Artists has sought to address this need and is an ongoing commitment for the Foundation.”

Kwame Kwei-Armah said: “Paul Hamlyn Foundation is one of the few foundations in this country that really supports artists in a fundamental and no-strings-attached way. It’s my absolute pleasure to be able to play a very small part in celebrating the essential and profound role that these awards and the artists who will receive them play in our ecosystem.”

Individuals are nominated by their peers, who are either artists or arts professionals. Each year, a panel of four new judges selects the recipients on the basis of talent, promise and need, as well as achievement. The awards might be made at any point in an artist’s career with no age restrictions, unlike many other awards schemes – Gustav Metzger was 80 when he received the award in 2006; Evan Parker was 68, and Daniel Kidane was 29. In selecting recipients, the panel always considers an artist’s potential for future development.

Moira Sinclair, Chief Executive of Paul Hamlyn Foundation, comments: “Awards for Artists are a cornerstone of our support for talented individuals and I want to thank everyone involved in the selection process for the 2018 Awards. The value that can be derived from the right award at the right moment can be seen in the achievements of previous recipients – who can fail to be heartened by the contributions they make to our world?”

Becky Beasley works in a variety of media including photography, sculpture and installation to produce objects, images and environments which give expression to human experiences at the limit of language. Recent works have explored friendship and collaboration in the context of mourning and loss, taking both personal and historical figures as her subjects.

Anthea Hamilton develops her work through a broadening and deepening practice of research. Topics are diverse and arrived at intuitively, in response to a specific location and in collaboration with others. Each project educates the artist, and she, in turn, shares the mechanics of her understandings through installations, sculptures and performances, unique in their aesthetics and realisation.

Simon Ling is a London-based painter with a career spanning several decades. Since the early 1990s, Ling has explored the dark matter of cultural reality, rendering the un-named and overlooked corners of the everyday urban environment in vibrant and richly textured oil paintings. His practice is animated by his sustained and intense engagement with the painting process.

Matt Stokes is concerned with the dynamics that shape individual and collective identity. His works are often made in response to particular subcultures and typically developed over long periods. Working predominantly in film and installation, Stokes seeks to celebrate and challenge assumptions about alternative ways of living, reflecting on social cohesion and the common humanity that binds us together.

Anne Tallentire’s multi-media practice focuses on everyday materials and structures to reveal systems that control our experience of the built environment. Throughout her career, she has been concerned with the politics of location, addressing shifting geographies, demographics and working practices of the displaced. She has been working in sculpture, installation, moving image and performance since the early 1980s.

Sarah Angliss is an electroacoustic composer and performer whose work explores resonances between English folklore and technology. She designs and builds robotic instruments, combining them with acoustic instruments, theremin, electronics and Max to create dreamlike soundworlds that would otherwise be impossible to render. A prolific live performer, she also applies her unusual sonic techniques to theatre. 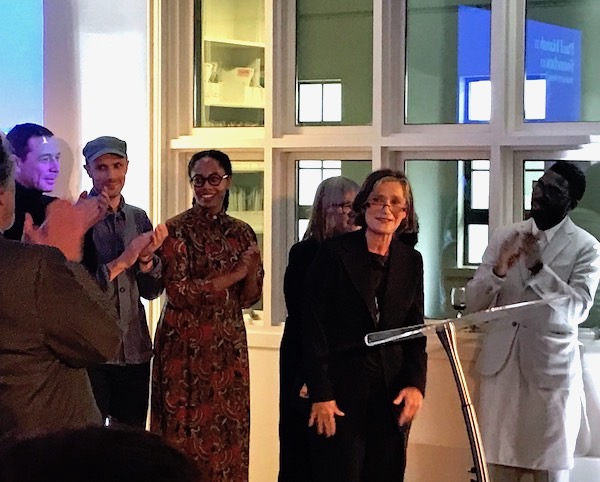 Frank Denyer’s works occupy the space outside the generally accepted categories of contemporary classical music. In his endeavour to transcend genre and style, Denyer has built up an arsenal of new musical instruments in almost every category, drawing inspiration from close engagement with the musical traditions of Asia and Africa and collaborations with musicians from around the world.

Paul Dunmall’s career has been defined by his exploration of the practice of improvisation for his primary instrument, the saxophone. His compositions often begin as fixed structures for improvisation, which then act as the framework for experimentation during their performance. Although identifying primarily as a jazz musician, his work also cuts across world, folk, classical and blues through his many collaborations.

Deirdre McKay aspires to create music that possesses the same pared-down rawness and enigmatic beauty as her significant influences from visual art, as well as the natural world. Her work has been performed by many notable performers of contemporary music including BBC Singers, Northern Ireland Opera, State Choir Latvija, Chamber Choir Ireland, RTÉ Contempo and Vanbrugh string quartets.

Kate Young’s practice extends outwards from her background in Scottish folk music and song to encompass an ever-growing range of world traditions. Drawing inspiration from folklore and ancient botany, Young weaves her interests into her compositions as a way of perpetuating and empowering traditions at risk of being lost to current and future generations.

Paul Hamlyn Foundation was established by Paul Hamlyn in 1987. Upon his death in 2001, he left most of his estate to the Foundation, creating one of the largest independent grant-making foundations in the UK.

Their mission is to help people overcome disadvantage and lack of opportunity so that they can realise their potential and enjoy fulfilling and creative lives. We have a particular interest in supporting young people and a strong belief in the importance of the arts.

The foundation’s objectives are to encourage artists to continue to practice despite outside pressures, financial or otherwise and to support visual artists and composers, across the broadest range of practices and genres.

Awards for Artists are made at a timely moment in an artist’s career, without being age-specific or having any strings attached in terms of how the money can be used. They are awards, not prizes, made according to talent, promise and need as well as achievement. The awards focus on the artists themselves rather than a particular type of practice and /or musical genre. Each award will consist of £60,000 paid over three years. The awards are not about recognising commercial success, and they will therefore only be made to artists who would benefit from financial support to continue to practice. Only the names of the recipients are made public, not the names of the nominated or shortlisted artists.