62-year-old Grenadian British Artist Denzil Forrester is to have his latest exhibition curated by the internationally renowned painter Peter Doig.

Doig, who is curating the show titled ‘From Trench Town to Porthtowan’, (26th May – 23rd June) alongside artist and curator Matthew Higgs, describes Forrester as “one of the most important painters to come out of London in the early 80’s and his work remains as vital and relevant today as it was then.” This large exhibition will showcase seminal early works as well as recent works painted in Denzil’s new home of Cornwall. 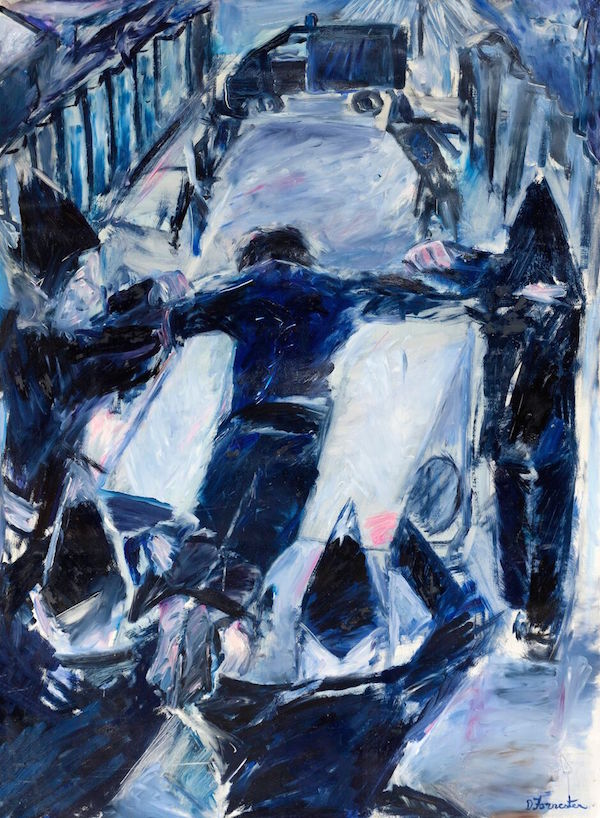 Denzil Forrester’s exhibition From Trench Town to Porthtowan, depicting scenes from his early life in Grenada to his new home of Cornwall, will be curated by Peter Doig and Matthew Higgs and is his first exhibition since moving to Cornwall in 2016.

Since moving to Cornwall in 2016, Forrester has made paintings that focus on past family life in both Grenada and the UK. These include learning to read with his guardian Ma Pets in Hermitage and making bags in the 1970’s with his mother and siblings in Stoke Newington, London. These paintings contrast with Forrester’s earlier works from the 1980’s, paintings made in direct response to the burgeoning dub reggae scene in London’s Afro-Caribbean communities.

Born in Grenada in 1956, Denzil Forrester came to England at the age of ten. After completing his BA at the Central School of Art and his MA at the Royal College, he won the Rome Scholarship in 1983, followed by the Harkness Scholarship which took him to New York for eighteen months.

In 2016, Forrester exhibited at Peter Doig’s London Gallery ‘Tramps’ followed by an exhibition in 2016 at ‘White Columns Gallery’ New York. The success of the exhibitions led to the to the acquisition of ‘Three Wicked Men’ for Tate Britain in 2017. After 20 years of living in London, Forrester moved to Truro, Cornwall in 2016, where he now makes paintings that focus on past family life in both Grenada and the UK.

Peter Doig on From Trench Town to Porthowan: “Denzil Forrester is one of the most important painters to come out of London in the early 80’s and his work remains as vital and relevant today as it was then. The large exhibition at the Jackson Foundation Gallery, ‘From Trenchtown to Porthtowan’ will showcase seminal early works as well as recent works painted in Denzil’s new home in Cornwall.”

Denzil Forrester “The idea of finding tranquil moments amongst a complex cluttered environment is used as a basic structure for my painting. Dub is a noise which doesn’t scream but is always pumping out a continuous beat until you can feel it shaking your body.”

The Jackson Foundation is housed within a massive carbon positive ex-industrial building in the centre of the thriving former mining town of St Just-in-Penwith, the Foundation was set up by leading contemporary artist Kurt Jackson and his wife Caroline and hosts an annual programme of contemporary exhibitions working in partnership with a variety of environmental and nonprofit organisations.