A ring, containing a Picasso portrait of Dora Maar is to be auctioned at Sotheby’s London’s. The piece was a gift from the artist to his lover in the 1930s. In his 1993 publication about their relationship, James Lord recounted the story of its inception: ‘Dora and Picasso one day were strolling on the Pont Neuf, they had a bitter altercation in the course of which the artist reproached his mistress for having prevailed on him to give a work of art in exchange for a bauble (a cabochon ruby set in a gold and Agathe ring), whereupon Dora took the ring from her finger and threw it into the Seine, silencing her lover.

She later regretted having been so impulsive. A few months afterwards, the riverbed at that spot was being dredged, and for several days Dora haunted the spot, in hopes of recovering her ring. But it was lost for good. And through Picasso’s fault, she kept at him until he created a ring of his own design for her’ (J. Lord, Picasso and Dora: A Personal Memoir, New York, 1993, p. 215). 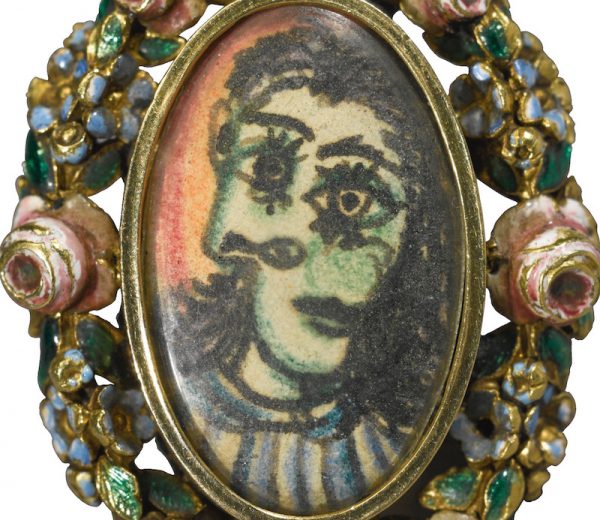 Picasso Ring With Portrait Of Lover Dora Maar To Be Auctione

The result was a small series of pieces of jewellery, usually found objects which Picasso then adapted either through the inclusion of a drawing or in some cases incising an image into the metal. Of these works, the present Portrait de Dora Maar is among the most attractive, with the intricacy of the enamel surround providing a striking counterpoint to the artist’s portrait of his lover.

The ring seems a particularly fitting symbol of their love; the legendary story of one of their first encounters, when Picasso came across Dora Maar Seated at a table in Les Deux Magots driving a small knife into the wooden table between the fingers of her gloved hands, sometimes drawing blood. Entranced by this dangerous game, Picasso introduced himself and at the end of the evening took the gloves as a memento. Maar’s hands then had always been a particularly charged motif in their tempestuous and impassioned relationship and from the story of the ring’s inception, it is clear that they remained so.

Portrait de Dora Maar remained in Dora Maar’s personal collection until her death in 1997 and was purchased at the sale of her estate by the present owner.