Tate Modern is mounting the UK’s first major Pierre Bonnard exhibition in 20 years, opening to the public on the 23 January. Work by this innovative and much-loved French painter will be shown in a new light. The exhibition will bring together around 100 of his greatest works from museums and private collections around the world. It will reveal how Bonnard’s intense colours and modern compositions transformed painting in the first half of the 20th century and will celebrate his unparalleled ability to capture fleeting moments, memories and emotions on canvas. 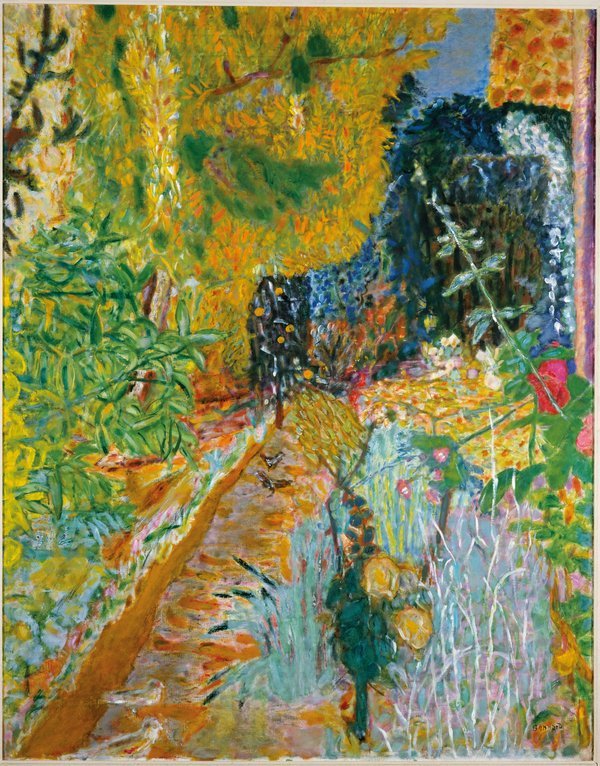 Spanning four decades from the emergence of Bonnard’s unique style in 1912 to his death in 1947, Tate Modern’s exhibition will show how the artist constructed his vibrant landscapes and intimate domestic scenes from memory. At once sensuous and melancholy, these paintings express moments lost in time – the view from a window, a stolen look at a lover, or an empty room at the end of a meal. These motifs can be seen in breakthrough works like Dining Room in the Country 1913 (Minneapolis Institute of Art) in which he brought interior and exterior spaces together to create a vibrant atmosphere, while the bright colours of works like The Lane at Vernonnet 1912-14 (Scottish National Gallery of Modern Art, Edinburgh) exemplify how his joyful palette could still evoke the poignancy of a moment gone forever.

The exhibition will emphasise Bonnard as a 20th-century artist who – like his friend and contemporary Henri Matisse – had a profound impact on modern painting and would become an influential figure for later artists like Mark Rothko and Patrick Heron. Bonnard will be repositioned as a man who engaged with the world around him, revealing overlooked areas of his activities – from his frequent travels around France and his practice of working on different subjects side by side, to his response to the crises of both the First and Second World War. Alert to his surroundings, he developed unconventional compositions in his paintings of everyday life: his landscapes collapsed into layers of dense foliage, such as Summer 1917 (Fondation Maeght, Saint-Paul-de-Vence) and street scenes, as in Piazza del Popolo, Rome 1922 (private collection), were simplified into friezes. Perhaps most famously, his interior scenes like Coffee 1915 (Tate) and Nude in an interior c.1935 (National Gallery of Art, Washington) caught domestic life at uncanny moments and reframed them from snatched points of view.

A variety of these domestic scenes mark out Bonnard’s career, often showing figures in quiet contemplation, apparently oblivious to the viewer’s gaze. The artist’s wife Marthe de Méligny was a continual subject in these images. She suffered from various illnesses throughout her life and treated these with what was then called hydrotherapy through repeated bathing. Bonnard’s paintings of her bathing, drying and dressing, are among his most iconic works. They form key markers in his development as an artist, as his partner’s withdrawal from the outside world becomes a shared psychological story captured in paint.

Bonnard’s process of reimagining through memory also allowed his paintings to become more abstract. This is already evident in the bands of contrasting colour in works like The Violet Fence 1922 (Carnegie Museum of Art, Pittsburgh) but reaches a high-point in the vivid Studio with Mimosa 1939-46 (Musée National d’Art Moderne – Centre Pompidou, Paris). The exhibition will conclude with a group of stunning works created towards the end of Bonnard’s life while spending the Second World War in Le Cannet living with scarce resources and the anxiety of invasion. These panoramic views and vibrant garden scenes show the artist looking back on a lifetime of memories and working on the brink of abstraction.

Pierre Bonnard (French: Born 3 October 1867 — 23 January 1947) was a French painter and printmaker, as well as a founding member of the Post-Impressionist group of avant-garde painters Les Nabis. Bonnard preferred to work from memory, using drawings as a reference, and his paintings are often characterized by a dreamlike quality. The intimate domestic scenes, for which he is perhaps best known, often include his wife Marthe de Meligny.

Bonnard has been described as “the most thoroughly idiosyncratic of all the great twentieth-century painters”, and the unusual vantage points of his compositions rely less on traditional modes of pictorial structure than voluptuous color, poetic allusions and visual wit. Identified as a late practitioner of Impressionism in the early 20th century, he has since been recognized for his unique use of color and his complex imagery. “It’s not just the colors that radiate in a Bonnard”, writes Roberta Smith, “there’s also the heat of mixed emotions, rubbed into smoothness, shrouded in chromatic veils and intensified by unexpected spatial conundrums and by elusive, uneasy figures.”

Pierre Bonnard: The Colour of Memory is curated at Tate Modern by Matthew Gale, Head of Displays, with Helen O’Malley and Juliette Rizzi, Assistant Curators. The exhibition is organised by Tate Modern in collaboration with Ny Carlsberg Glyptotek, Copenhagen and Kunstforum Wien.