for immediate release:  A huge pile of discarded clothes has swallowed up the historic furniture in the study of Museum Rijswijk, where 19th-century poet Hendrick Tollens once worked.

“Museum Rijswijk is showing textile artworks by nineteen international artists… Textile inherently appeals to the touch. Sensations and associations are evoked at the touch and sight of particular fabrics. Vintage clothes and hand-crafted pieces, that only a couple of generations ago were made in every household, conjure up memories of particular people or times.”

Museum Rijswijk is a jewel box of a museum. It is housed in a merchant class home with many rooms on three levels built in 1790. A subdued neoclassical style graces the house with a very recent modern wing which is discreet/barely seen on the treed property from the outside and providing the largest exhibition space in the institution. The 18th century building was constructed on the remains of a 17th century farmhouse and the city has grown around it. The two different “styles” of this building offered the museum an opportunity to play the work on display against the rooms themselves. What goes where is as interesting as what is seen beside each other. This might seem an obvious and rather vague thing to say and can be applied to any number of galleries and museums around the world but is especially important to the understanding of carefully and stunningly laid out show.

When it comes to Biennials or group shows, you become accustomed to seeing a mixed bag of work crowded into spaces not necessarily capable of showing the work to its best advantage. Often limited or available space becomes an excuse for badly displayed exhibitions in which the quality of the work is diminished. In this regard, this show was a brilliant exception. To see the work by a group of artists from across the world working at the top of their game in both personal expression and chosen process or media, mixed or singular, set as if jewels within the Museum Rijswijk, was a joyful experience. 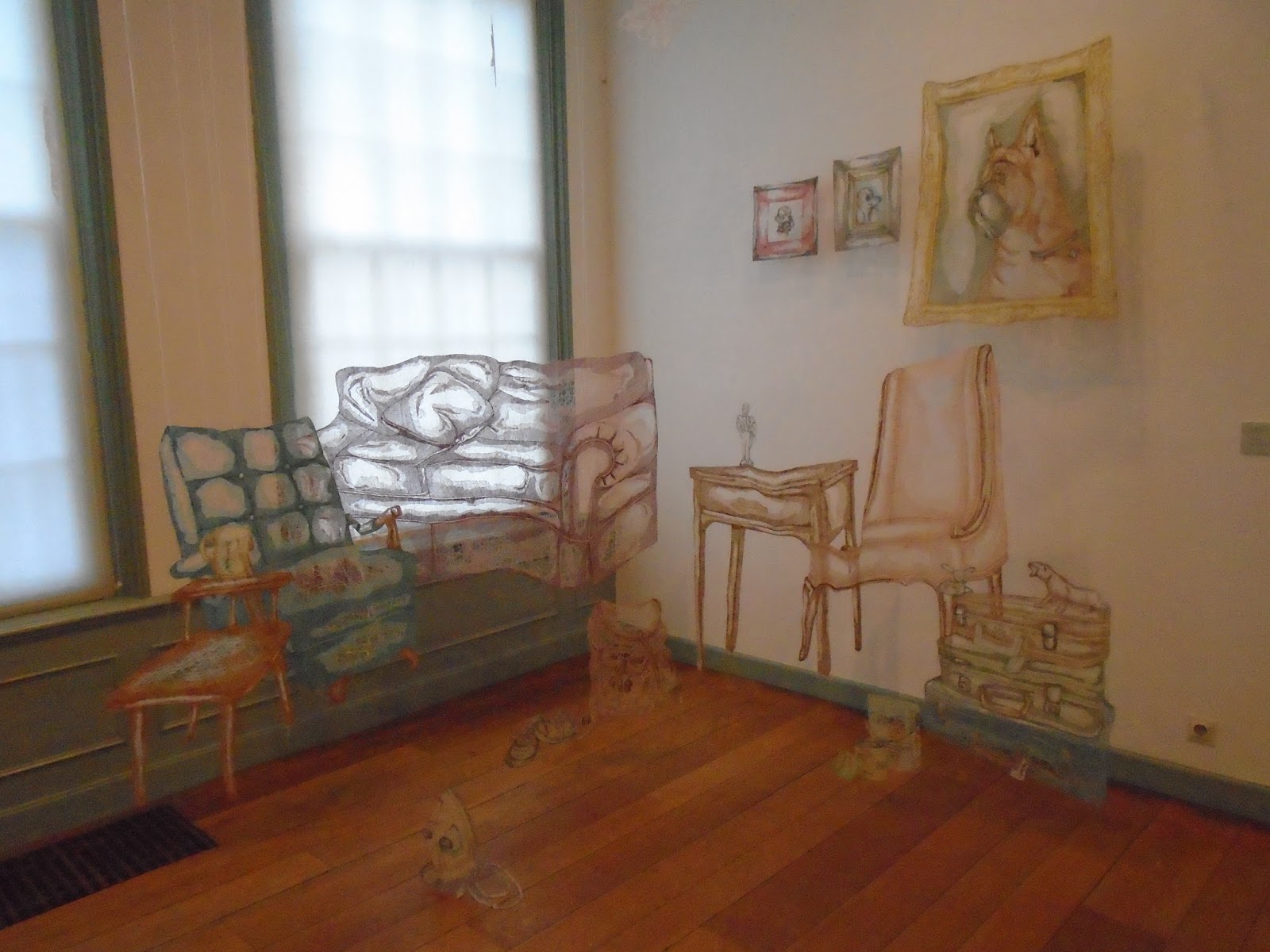 Amanda McCavour’s images of thrift shop furniture made of embroidery threads suspended in the air with a substrata floating are hung by themselves in a well proportioned cream colored room[sentence too long] on the main floor of the older house. The room has applied decorative moldings between the large casement windows and on the wainscoting, which, along with all the woodwork, is painted moss green. Because I know Amanda’s work and have seen it in a more contemporary space, I feel there is an extra level of poignancy to this work which has been added because of the setting. There is a sense of loss or expectancy: who lives/ lived here? What has happened? Where are they? 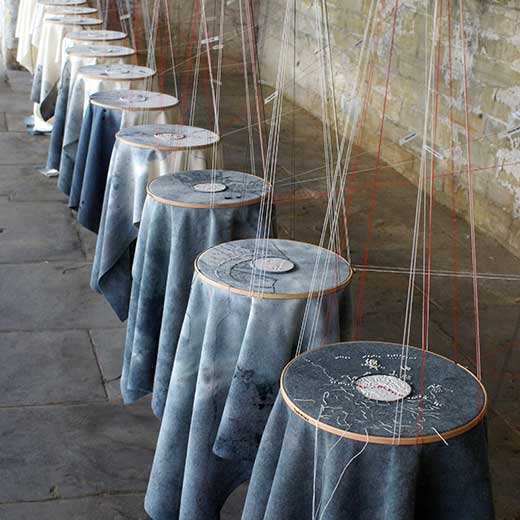 Caroline Bartlett’s work sits in a space where the new architecture is graphed onto the old. Bartlett’s work is a series of embroidered cloth in [deleted their] round embroidery hoops hung side by side at the same level in the space by lengths of floss from above. The work is anchored behind ensuring a certain stillness that fights the breeze caused by viewers passing by. The display is arranged in an alcove that descends along a ramp to the lower floor level and exposes more of the stone work of the old foundation (the new building bumps out a few feet from the foundation wall). The individual works transition from white at one end with a blue dye seeping from the other edge further into subsequent clothes until the last which is completely blue. The act of embroidery has been stopped mid stitch, the work has been dropped but has not completely fallen to the ground: gravity and time suspended. In a way, the piece mirrors the space in which it is hung and like McCavour’s work there is an absence. There is the unnamed and assumed to be female embroiderer. I should say here that my reading of this work  may have nothing to do with the intentions of its maker or the curator’s decision to position it here. It is just one of many possible readings.

In the new contemporary site there is breathing space. The site is featureless and nearly as long as it is wide, with a ceiling two stories high. Kari Steihaug’s piece “4th Grade,” a grouping of 21 sweaters, used and worn, are hung in a row. The sweaters were collected by Steihaug through the years in different parts of Norway. Each has begun to be raveled, and the pulled yarn while still attached to the sweaters, has been knitted into a reproduction of her grade 4 class picture. All the children are wearing sweaters. Again, threads from one place gathered into another place carrying a narrative to be guessed at.

Another artist working with garments collected from other people is American artist Derick Melander. I consider Melander a colourist working in the abstract expressionist offshoots of colour field and hard edge work. This instalation is back in the old house in another of its Cream and moss green rooms, this one a small “Library” or perhaps “Den” of the Dutch poet Hendrik Tollens (1780-1856) who lived in the house in the 1800s. Melander who folds and stacks clothing to create temporary sculpture/ installations has, with his “Tollen’s” piece, incorporated / absorded the contents of this “staged” room. Book cabinets, writing desk, table and chairs, and other 19th century decor objects are all part [or become part] of his pile of stacked folded clothing. It is in the stacking that his joyful colour work is created. Using no dye, and relying on the range of colours that have been in the fashion market, his selection and placement of colour is simply brilliant. The work changes in colour as you look up across and around the corners of the cube, going from dark at the bottom, anchoring the work to the floor on which it sits, drifts in layers of dark to light to dark again, with swirls and diagonal shifts of colour that are as complex and subtle as a Turner landscape. The stack is topped off with the carpet which was on the floor and provides the footprint for the work.

The four pieces I have mention are examples of different contemporary approaches to using fibre, thread, and yarn garments. In other words, these are different approaches textiles artist are using to make work. They all carry narrative or as it says in the press release, they all try “to conjure up loving memories, melancholy or even alienation through a contemporary idiom.” The old-fashioned and sadly neglected technique of petit point, in the hands of Ying Chew, is as beautiful if not more so than any I have seen. On “tarnished/ stained” textiles, there are images of women from a bygone era, perhaps from the same era as the house, hung in the most formal of the staged rooms alongside the 18th century paintings, again in the same colour scheme of cream and sage green. This room has a vine patterned scroll-wall paper of cream and white over which three of Ying Chew’s “unidentified woman” pieces are shown, suggesting a setting for the lives these women may have lived. Cleverly, some of her work is on display in the basement of the house, which is also the access from the modern lobby to the galleries, and the formal main floor of the old house. In an interesting way, both the unidentified subject of the petit point and the viewer are given a bit of class history in the Upstairs Downstairs movement through the old part of the museum into the contemporary wing.

As a site for a textile exhibition, the Museum Rijswijk has what I see as the advantage of adding a layer of context to the work, which some may insist is irrelevant. I believe, however, that it and the textile history of the Netherlands must surely have influenced the originators of the event. That, and the selection process have combined to produce an exhibition that respects and celebrates textiles in a way I have not experienced before. I look forward to 2017.