Tate Modern did well in 2016, benefitting from the opening of its huge new extension in June of that year. The bounce did not last, by 2017 attendances were down by 37%. Tate Britain did not find a place in the top ten that year, but did, during the same period, record an increase of 3%. This is very probably owed to the success of its David Hockney show, on view there from February to June 2017.

The Royal Academy also did well. If the Hockney show at Tate Modern with 478,082 visitors was the top London exhibition in 2017 that you had to pay to see, then the Royal Academy galleries were next in line during the same year, with Abstract Expressionism (317,905), Revolution: Russian Art (209,059), and the R.A.s venerable Summer Exhibition (197,402). Figures are not available yet for 2018, but the Academy’s huge 150th-anniversary celebration must pretty certainly have surpassed these figures. Its spaces available for exhibitions were much expanded at the same time.

What seems to be emerging from these statistics is that there has been a recent determination on the part of these prestigious official institutions to enlarge their footprint where possible. Some museum sites, obviously, can’t be physically expanded, but, in addition to those already mentioned, the V &A has had a try, with a new entrance in exhibition road and new galleries linked to that. These institutions are also, so they tell us, attempting to match and justify these ambitious physical extensions by democratising themselves and reaching out to all sections of society. It is his populist effort that seems to be in the process of going wrong. 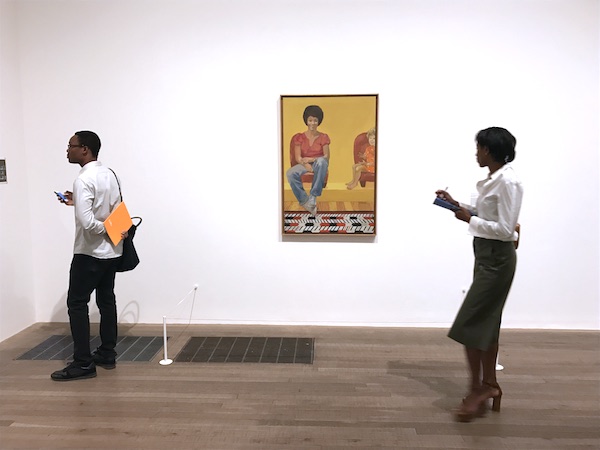 Soul of a Nation: Art in the Age of Black Power Tate Modern July 2017

Part of the problem is that, while in theory democratic, this effort is very much top down. London museums are more convinced than ever that it is not just their duty to make art available to the widest public possible, but also to support moral crusades of various kinds and to lead their audiences towards what is pure and virtuous.

It is quite evident that there is currently not just one, but a whole phalanx of social revolutions taking place here in Britain, and our London museums are determined to be in the vanguard. Support for women’s art, support for the art produced by members of ethnic minorities – to choose just two major examples. The problem, however, is not these good causes in themselves, but how the support is delivered. Also there the is the question of the relationship, not always or inevitably particularly close, that may or may not exist between the chosen themes and the manner of their delivery to the public.

Increasingly, here in official Britain, the two major good causes just named – women’s art and ethnic minority art – often tend to be regarded by those supporting them as one and the same. Does one perhaps encounter here a strange, distorted echo of the creed of Socialist Realism which governed Soviet art for decades, and which collapsed finally in 1991?

The art of the Modern Movement, in its dominant years, from say 1905 to perhaps as late as 1985, was never about this. It was about two things, sometimes wedded, sometimes opposed. One was a determination to see the world – what could be observed and directly experienced by the individual – absolutely afresh. The other was the idea that artistic creations could be completely autonomous, both independent of what had been seen and entirely detached from the society that produced them. The first of these propositions has perhaps survived more successfully than the second one. Totally non-referential abstract art seems now to have crashed and burned with the Minimal Art movement of the late 1970s and early 1980s. In any case, art history now tends to point out that, for example, Abstract Expressionism was far from been non-political, in the post-World II context in which it arose, despite frequent claims made to this effect. Whether its progenitors originally intended this or not, it became an emblem of individual liberty, as opposed to the lack of it in the official cultures of the Soviet bloc. It also became the flagship for increasing American dominance of the art world, cemented by its very different successor, Pop Art.

What the triumph and demise of the Modern Movement has left us with, however, is the paradoxical situation that supposedly ‘radical’ art currently finds some of its most devoted promoters among the bureaucracy of state-supported cultural patronage.

In Britain, this has had some peculiar consequences. British official patronage of visual art has, ever since the Victorian epoch, tended to be moralistic. This tendency has strengthened recently. One reason for this is that there hasn’t in fact been any convincing radical art movement at work here in Britain since the 1990s, with the rise and triumph of the so-called YBAs: Younger British Artists. No longer young, the survivors – Damien Hirst, Tracey Emin, the Chapman brothers – have been painlessly absorbed into the British Establishment, just as members of the Pre-Raphaelite Brotherhood were before them. 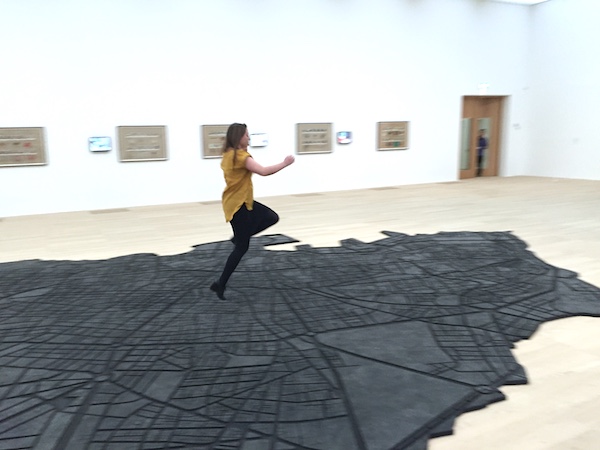 Today a good cause tends to matter more in supposedly radical art than any real originality of imagery or presentation.

A contributory factor has been a typically British horror of the rampant commercialism of the contemporary art world as this has increasingly manifested itself elsewhere – for example in the gaudy festival of picture-flipping (buy one day, sell at a huge profit the next) staged each year at Art Miami Beach.

British official patronage of a conveniently redefined, identifiably virtuous avant-garde focuses its attention on activities free, or nearly so, from commercial taint: chief among them performance (presented as the newest manifestation of the visual arts when it is arguably the oldest, with roots in the Stone Age), artists’ video, and installations.

These manifestations tend to fit rather uneasily into the institutional settings provided for them, originally designed to house and display art of a very different sort. For example, where performance art is concerned, how many performances can you jam into a museum day, in a building open to the public from 10 a.m. to 5 p.m.? And how many repetitions can the performers be asked to offer, during a month-long run of a particular event in a museum space?

Professional theatre does this kind of thing to much greater effect, in purpose-built settings. Compared to this, nearly all performance art is am-dram. Under-rehearsed at that. And it is not genuinely populist, for all the claims made by enthusiasts. No run of performances in a museum or gallery setting can deliver an audience of anything near the size of the one that might attend a big exhibition. In this very specific sense, contemporary performance art is not genuinely populist. It is addressed to the few, not the many. The bureaucracy would like to ignore this, excited as it is by performance art being, as it thinks, free of the profit motive and visibly democratic.

The inconvenient fact is that pictures on walls, or even sculptures in spaces, deliver art much more efficiently to a large audience than performances or even videos. The visitors arrive between at the time of their choice between the announced hour of opening and the hour when the institution closes. They look for as long and closely as they like at what is offered. And, having had their fill, they depart.

Another inconvenient fact is that if there are artists who are genuinely young and genuinely talented around – this comment applies whatever medium they use – the big official galleries in London, or even elsewhere in Britain, don’t seem to be finding them. The most recent Turner Prize was won by Lubaina Himid at age 62. The organisers had to raise the age limit, first set at 50 in 1991 when the YBA epoch began to dawn, in order to give it to her.

The most feted ‘emerging artist’ of the past few years here in Britain has been Rose Wylie, born 1934. I loved her show Quack Quack at the Serpentine Sackler, which opened 30th November last year. She was recently the subject of a BBC documentary – Rose Wylie: This Rose in Blooming. But a flock of feisty little ducklings, fresh out of the egg, busy stirring up the stagnant British art pond would have been nice to have too. 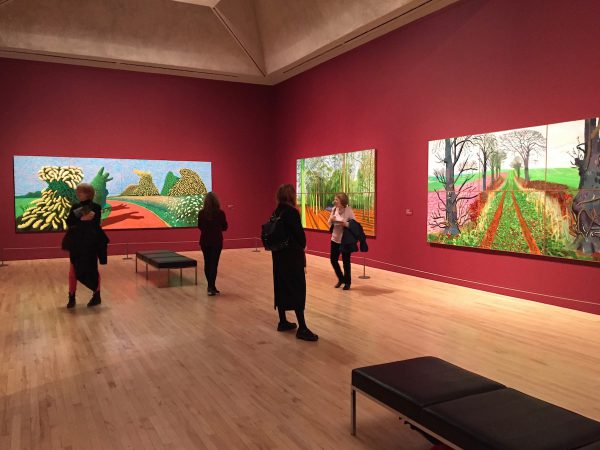 The lack of new contenders is, I think, part of a much larger problem – one that is not confined to the smugly moralistic realm of British art. This problem is that much contemporary art now has ambitions to become a religion substitute. You are invited to go to museums as your ancestors might have gone to church, in search of the ineffable. The audience is confronted with a succession of raw personalities making unverifiable claims, with nothing very convincing in the material world to back those claims up. One example, now fading into the past, was, of course, Joseph Beuys, still commemorated in a large gallery in Tate Modern. Without Beuys’ own charismatic presence, it seems a tad depressing; a collection of relics without the living saint.

A present-day exemplar of the ascendancy of performance art, a personage, influenced by Beuys, and currently scheduled to be the heroine of an exhibition in the main galleries of the R.A. in 2020, is the Belgrade-born performance artist Marina Abramovic, now aged 71. She made a big impact with her show The Artist Is Present staged at New York’s MoMA in 2010 and repeated at the Garage Center for Contemporary Culture in Moscow the following year. A principal element in this event was simply the artist seated for long hours in a chair, allowing herself to be looked at, but neither speaking nor spoken to. In 2014 there was a similar show entitled 512 Hours at the Serpentine Gallery in London.

If one has any sort of historical sense, it is hard not to compare Abramovic with the swarm of religious charismatics who appeared in Europe in the disturbed society of the late Middle Ages. The only one fully remembered now is, of course, Joan of Arc, who met with a tragic fate. There were, in fact, numerous others – for example, the British mystic and visionary Margery Kempe (c. 1373-after1438), tried multiple times for heresy but never convicted. Wikipedia notes that: “Kempe proved to be something of a nuisance in the communities where she resided, as her frantic waiting and extreme emotional responses implied a superior connection to God that some other lay people saw as diminishing their own.”

Abramovic is more tactful than this – all she does is sit there – but the implied claim to spiritual superiority much the same. Confronted with Abramovic, what can her audience usefully say, except perhaps: “Lord I believe – help thou mine unbelief”? It often seems to give this contemporary audience great satisfaction and even comfort to encounter her. Selected, randomly chosen participants sit opposite, gaze at this charismatic figure and sometimes weep. Judgements about aesthetic matters are not required. The emotional surge is enough. And the settings where this happens are indeed temples of a sort, officially sanctified without a doubt. Wherein, in this case, “many are called, but few are chosen.”