Artist Philip Hartigan talks about art, interviews other artists, and more on his blog Praeterita.

pacing downtown loft, bare window views, burial ground reconstruction, listening for signs, her own music she pins to the wall, catalogs blood lines, New York Abstraction sewn to her feet, two generations across the wall, floor to ceiling, pigment pencil, we have killed ourselves with concoctions, surrendered gladly to our possession, time tick tocking another dimension

Dianne Bowen is a New York artist who uses paintings, drawings, words, installations, videos, to create a set of complex visual responses to internal and external space. At a conceptual level, her work originates in a fascination with systems, of communication and miscommunication. At a visual level, her work in all media is  just incredibly satisfying to look at. I was delighted to discover that her use of words is as skilful as her manipulation of the material processes of art. In this interview, she answers some questions about the relation between word and image in her work.
Philip: When I read your note poems, I am struck by the flowing rhythms of the phrases, and the way each one contains a vivid, crystallized image or action. What strikes you when you re-read them?
Dianne: The flowing rhythms are directly related to the rhythm of the mark making process and the act of drawing. Daybreak in New York City is really an inspiring time for me to write. Text and image are flowing together like two rivers parallel towards the ocean. In many ways the experience of reading them afterwards is akin to walking in the streets without my skin.
Philip: When did you first start writing them, and why?
Dianne: When my family found out my younger brother had cancer, I began a series of works titled, “Passages and the Price of a Ticket”. The first piece directly incorporating my note poems was for my brother who died shortly after. Grieving my brother’s death, I embarked on the next series “A Hard Winter” which spanned over seven years. These were large-scale paintings exploring the process of death and loss. Poems were written directly into the work or the pieces were inspired by the poems by W.B. Yeats, Audre Lorde, James Joyce, Sylvia Plath and several other poets I had gone to hear read in New York City. It was at this time I began to read out at open poetry mics. The writing became an element in the works but was also separate with it’s own direction of thought. In 2006, I turned to drawing, exploring how we hear and listen. Music as a language connected to drawing as the most basic marks we make as human beings to communicate. After clearing my studio wall in 2008, I sat for hours thinking about how we hear and listen to all the information bouncing around us. Again, thoughts of my brother stirred. How could I hear him? Could he hear me somehow? I started noticing ambient sounds, grabbed a pencil and began jotting down a loose Morse code. The first words translated from these sounds were: Listening-message received. What I now call “code poems” are created from these translations.
The two acts of writing note poems and drawing continue to run parallel. Each bears influence on the other. 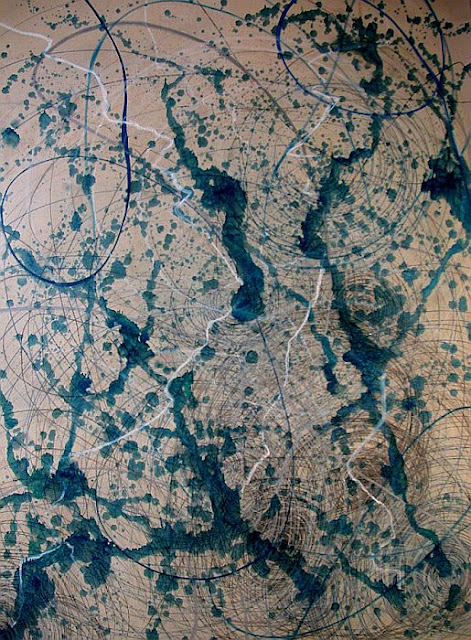 Philip: Who are the writers that you like reading most?
Dianne: I have quite a few, writers and poets I continually go back to: Audre Lorde, Marge Piercy, Anne Sexton, Medbh McGuckian, Pablo Neruda. At the moment I’ve been re-reading the book “Out of This World”, a compilation of Beat Poets. I’ve been particularly interested by Burroughs’ fragments.
Philip: At a practical level, how do you bring together a note poem and a drawing/painting? Or are they parallel but separate?
Dianne: The drawing and poem develop simultaneously through process. The poem’s final edit is done after spending a few days contemplating the finished drawing. As stated previously, the two acts of writing and drawing run parallel; while influencing each other, they express two ideas of thought and exploration.
Philip: At a more abstract level, what relationships do you see at a deep creative level between the act of making visual art, and the act of writing?
Dianne: Writing and drawing are both a form of language and mark making. The drawings and writing have cadence, weight, flow and texture. In a sense I’m weaving both with a visual image in mind. I consider the poems an extension of my mark making process conceptually.
Accompanying poem: poem of the same name inspired by Pablo Neruda

blue lines from fingers swing, hard and soft over my heart, across your land, silent cadence, a secret whispered repeating now I want them to say what I want to say to you to make you hear as I want you to hear me

Philip: Is there anything you haven’t tried yet in terms of text and image that you would like to explore in future?
Dianne: I’ve been experimenting this past year with video. Drawing and performing note poems that are made up on the spot in the same way as quick gesture drawings for recent work. I keep the time length to 1-3 minutes but there is no editing of content. It either works or it doesn’t, a brutal editing process. The videos are something I see as a third medium working in and associating with the drawing and poems.
You can read more of Dianne Bowen’s work in “A Fragile Conversation”, an 80 page full color book released today via Blurb.com. With foreword and essay by Leah Oates, of Station Independent Projects, an archival edition of the book will also be released on line November 10, 2011 through Adorama. And if you live in NYC, Dianne will be reading on October 28th at a collaborative event with theater director/writer Kofi Fosu Forson, at Gathering of the Tribes, 285 East Third Street (between Ave C&D).